There has been a great deal of change in SSD storage within recent years and it leaves much of us confused.  The core of this change has to do with a continuous upgrade cycle of NAND flash memory which seems happen every few months, resulting in new SSD products and many not understanding which SSD is the best for their specific needs.  Yes, we can simply buy just about any SSD for simple storage and it will suffice, but will a value NVMe SSD suit a committed gamer, or even a media professional who just might be pushing that SSD to the limit.  Perhaps things might have been much easier if retail packaging clearly indicated best product uses for that specific SSD right on the packaging. 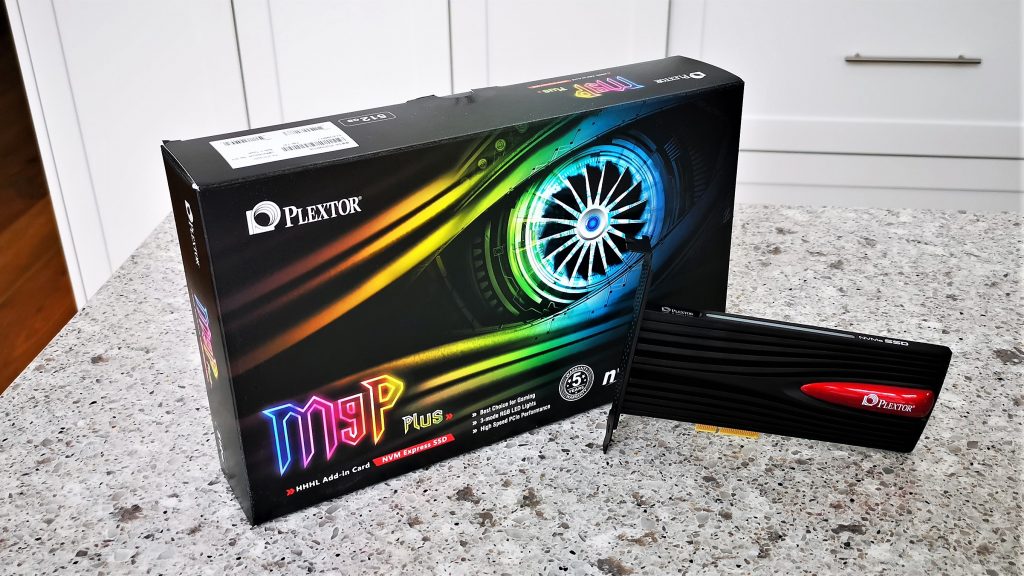 Our report today takes a close look at the newest Plextor M9P Plus 512GB NVMe SSD.  Our sample is of the HHHL (Half Height Half length) AIC (Add In Card) form factor which is refreshing as we haven’t looked at one of these in some time,  but you can bet that there is a M.2 SSD inside this case.  This SSD is available in three form factors, this being just the SSD, the SSD with a passive heatsink, or the AIC format as you see here.  It is available in capacities of 256GB. 512GB and 1TB and comes with a 5-year limited warranty. Performance is listed at 3400MB/s read and 2200MB/s write with up to 340K Read and 320K write IOPS and the life expectancy for the M9P Plus is 160 TBW (Terabytes Written) per 256GB of storage. 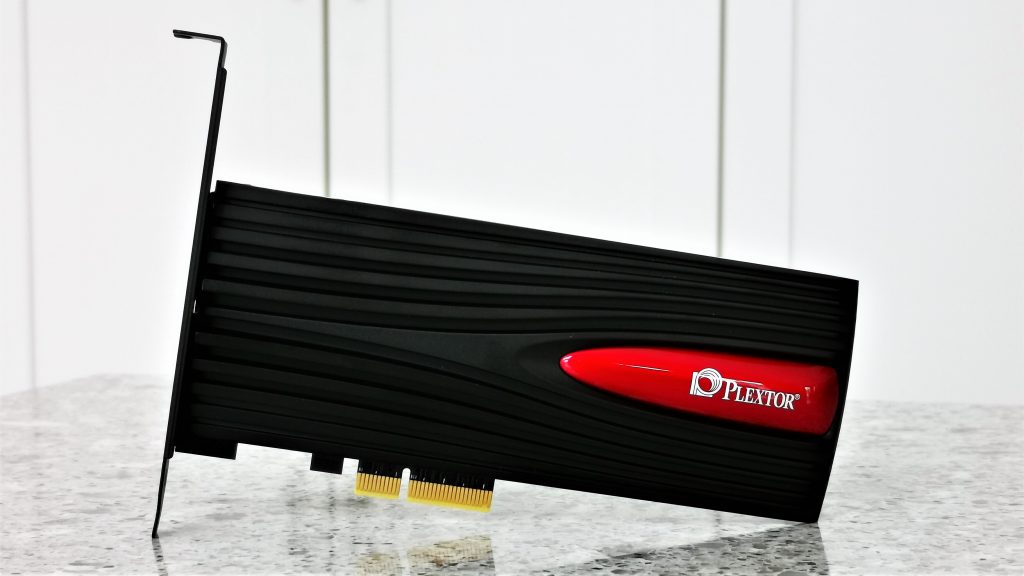 The exterior casing is solid metal  held onto a PCB by four screws.  If you look at the top two shots up, you will see a white plastic strip running along the top of the case.  This is specific to this SSDs 3-mode RGB LED lights. The exterior rib design provides for passive heat dissipation and, just inside the cover is a strip of thermal two-sided tape that sticks to both the cover and M.2 SSD components for heat transfer. The Plextor M9P Plus is a PCIe Gen 3.0 x 4 (four channel) SSD. 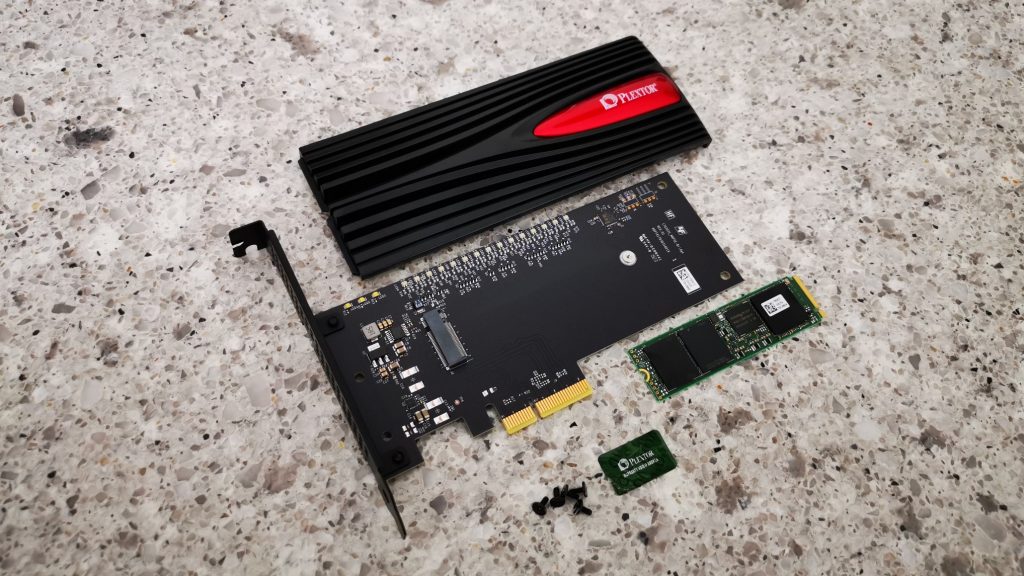 This photo depicts the Plextor M9P Plus disassembled and we might advise against such as that would immediately void your 5-year warranty.  This unit is held together by four screws, one of the screws being covered with a green security sticker that cannot be removed and replaced without it being obvious to Plextor’s warranty department. 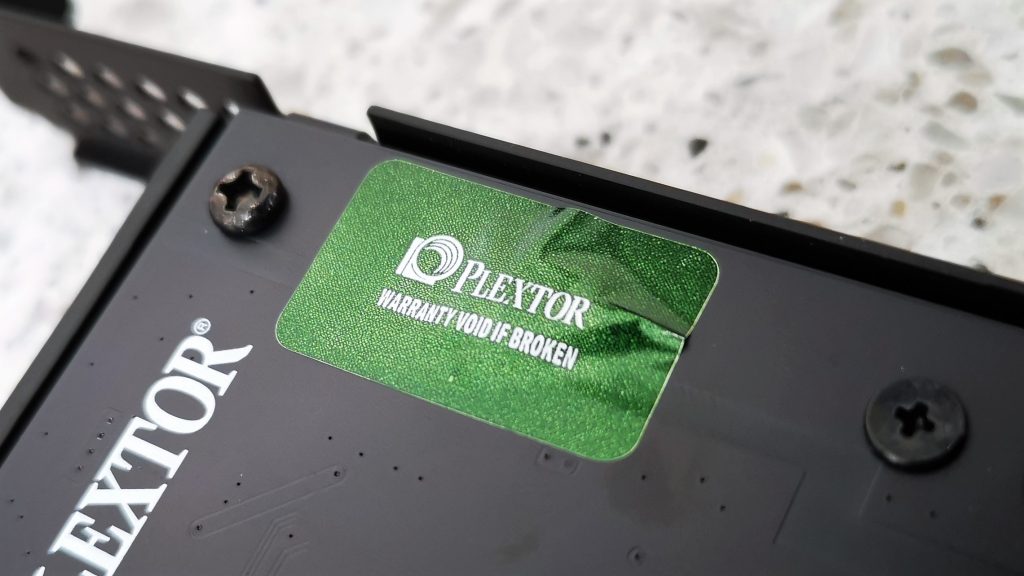 The M.2 SSD itself is a one-sided SSD that contains the Marvell Eldora Plus 88SS1092 NVMe 8-channel controller, two pieces of Toshiba BiCS4 TLC 96-Layer NAND Flash Memory, along with a NANYA DDR4 DRAM cache chip. 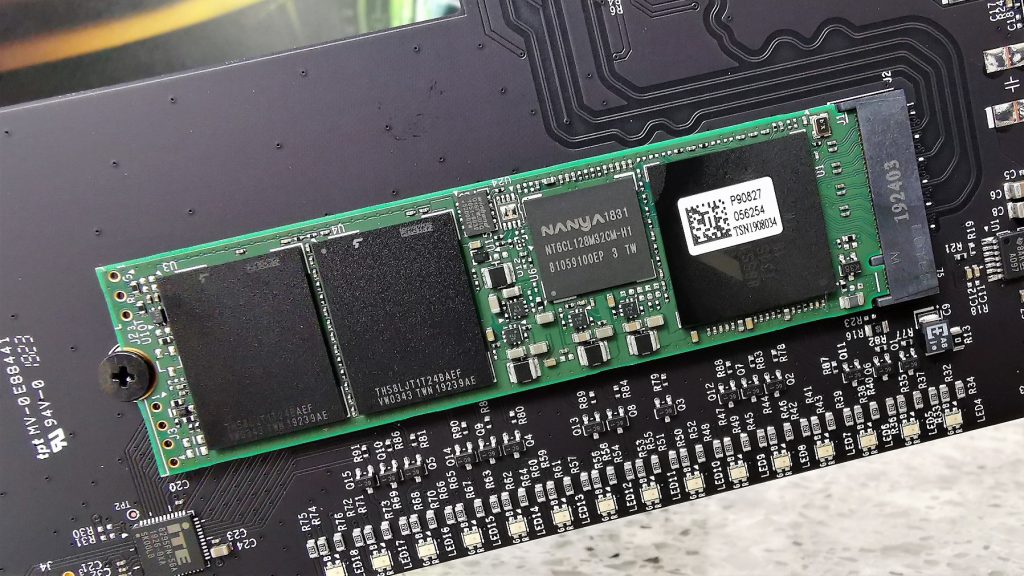 If you look along the bottom of the PCB in this picture, you can see 15 LEDs evenly spaced.  As well, each of the two Toshiba memory chips accounts for 256GB of RAW NAND flash memory, both combined of which provide the user with 477GB of storgae when the SSD has been formatted. 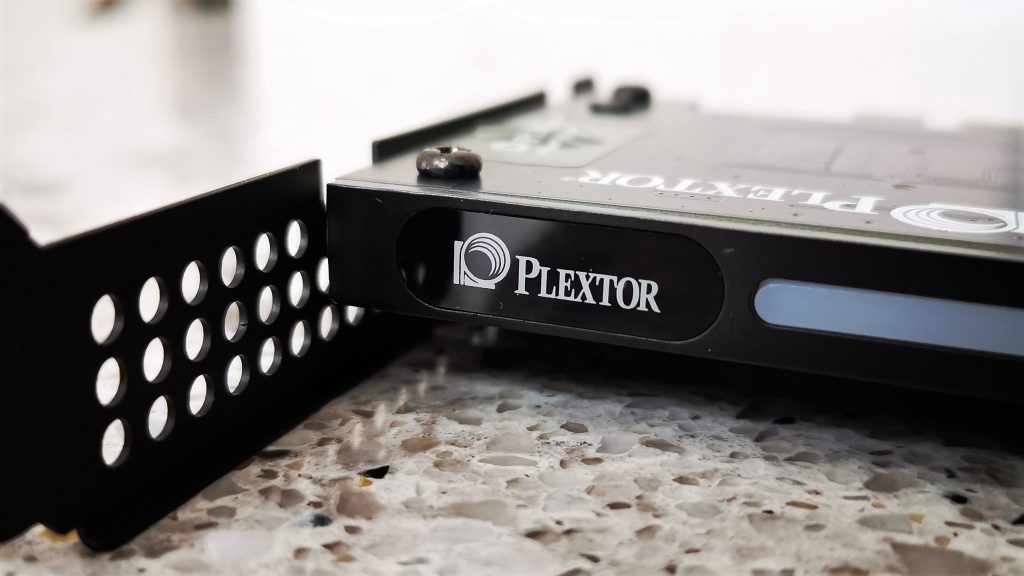