The one question the always seems to resurface as we travel spreading the SSD word, is how an SSD is so much better than a hard drive. Even today, we are still at a point that this question seems to be the first question asked, even before the obvious, “What is an SSD?”

As it does most, we think the answer may surprise you and will most likely have you jumping off that fence and buying your first SSD today. In today’s article, we are going to explore the single most important reason to replace your computers hard drive with an SSD.  Follow along as we describe something that so many are missing out on.

WHY IS MY COMPUTER SO SLOW? 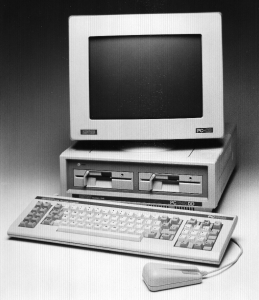 For those of us with a few years under our belt, we can remember the point that computers entered the consumer main stage (somewhere in the 80’s) and their selling point was that they would significantly reduce the time needed to complete work tasks such as typing…and they did.

My first PC was an Amstrad dual 5.15″ floppy system that cost $3200 and two floppy 5.25″ disks sufficed for the hard drive that were fed into the front of the system.  These disks each contained DOS, Windows and specific applications such as Worderfect and FoxPro to name a few.  On each start, you would feed and replace each disk until the system was fully loaded.

The reason for this was that the hard drive we take for granted in current PCs  required a large well ventilated room and that just wasn’t very practical for the consumer.  They were just that big. Even with the installation of hard drives in modern systems, yesterday’s computers have something very similar to those of today; they simply take to long to get up and running.

Quite frankly, when you realize how much of your life is wasted waiting for your computer to start, you just might thank that large, well ventilated room, sounds rather appealing. Read on!

This past week, I spoke with a rather large group of people and asked all to do me the favor of timing how long it takes their computer to start, as well as, averaging out the number of times per day that they started their PC.  Each person worked with and/or owned their own PC and all systems contained a hard drive. The start time was considered the time from when they pushed the button until the point that they could input into the PC. We were amazed at the answers received!

First off, the average number of times a day folks turned on their computers was five, but in analysing start times, they ranged from forty-five seconds to over three minutes and averaged out to one minute and thirty-five seconds.  Let’s examine this with a similar test ourselves. After completing this para, bookmark this article and shut off your computer.  Re-start the system while monitoring the start time and remember how long it takes to boot. Now, go into a relatively quiet place in your home or office and just sit there, doing nothing, for that same length of time.  Did this seem like an eternity?  Did it help in realizing how much time we spend just waiting for the PC to start? Hold on because we are going to change all that, but first, lets figure out just how much life we are wasting.

PASSING YOUR LIFE AWAY WITH PC START TIME

As we said, the average person’s computer takes one minute and thirty-five seconds to start and there are five starts daily for a total of seven minutes and fifty-five seconds a day, or just over two full days a year.  Would you have ever thought that you were spending at least two days a year just waiting for your computer to start?  It’s a fact and that’s what we are here to change. Let’s start with a bit of a video though:

The first thing you might think here is that Samsung has found a rather clever, and appealing, way to market their SSDs, and you would be right but that’s not the point.  What we should be wondering is exactly what an SSD is and how it will save us time.

Simply put, the difference between a hard drive and an SSD is the way media is stored and the time it takes to access that media in order to show effect on your screen.  With a hard drive, the disk spins up to an incredible 10,000 revolutions per minute and the drive contains an arm which must position itself in exactly the right spot and then wait for the information to arrive, only being able to pick up relatively small chunks at a time. In converting rpm to mph, we find the 10,ooo rpm drive spins at about 104 mph, whereas the 7200 rpm hard drive spins at about 75mph.  Incredible? Disk fragmentation, that is so common in hard drives and hard drive failure, becomes very easy to understand when we consider the mechanics of retrieval and that the entire file may be only grabbed in portions.

Let’s examine the hard drive on the left compared to the circuit board of the Samsung 840 Series SSD on the right. The concept of ‘no moving parts’ becomes a bit more realistic.

The SSD is a bit different and it is much more than the fact that there are no moving parts that can fail.  Like a flash drive, the SSD contains several memory modules and a controller.  Information is fed through the controller and distributed to the memory modules, or vice versa, retrieved from memory modules through the controller and to your PC.  Interestingly enough, unlike the hard drive which has only one route, or lane, to store or retrieve data, typical SSD controllers have either eight of sixteen lanes which lead directly to the memory, much like comparing a single lane route to a multi-lane highway.