SSD Components and Make Up – An SSD Primer

In our first article entitled ‘Benefits of The Solid State Drive‘ we briefly provided comparison between a SSD and a hard drive and described the benefits of such an upgrade.

We are going to follow with a description of SSD components along with an understanding of the purpose of each. This article will not only provide a solid foundation in your understanding of SSDs, but also, will also help in your final decision and choice of the right SSD for the job.  If it helps in your purchase decision, it has to be good right?

Every SSD has a number of components that are always present.  There are different SSD form factors which we will cover in our next article but, for the most part, there is always a printed circuit board (PCB) which contains a interface to connect to the computer, SSD controller and a number of modules of NAND flash memory chips. 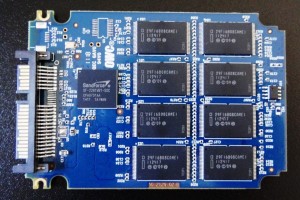 We have chosen to highlight the OWC Mercury Electra 6G SSD for this article because it is a 2.5″ typical notebook formfactor and the most common that most likely see today.

The SATA interface is best seen in the left photo above and consists of a gold connector which easily connects to your laptop or desktop computer.  Without belaboring on the definition and revisions of SATA, the consumer only really needs to understand that all SATA SSDs are backward and forward compatible and any will serve the purpose it is intended without question.  Most computer systems in use are SATA 2 with newer systems now released with SATA 3 capability.

The difference between the two breaks down to how fast the data can be transferred from the SSD to your computer and, in the case of applications, executed.  Typically, a SATA 2 SSD will only transfer speeds as fast as 280 megabytes per second (MB/s) whereas new SATA 3 drives are reaching as high as 550MB/s in a single form factor notebook or desktop SATA 3 SSD.  Lets take a look at two typical benchmarks, the one on the left depicting the Sandisk Ultra SATA 2 SSD performance with the one on the right depicting the Corsair Force Series GT SATA 3 SSD.

We can see that these are not peak results, this being the fault of the benchmark software for the most part.  An important observation, however, is that SATA 3 typically doubles the performance of SATA 2.

The SSD processor (or controller is it is more commonly referred to) is the heart and soul of the SSD.  It is the engine by which information is pulled from storage, translated and then sent to the SATA interface for travel to your computer system.  It is the sole reason that a typical SSD is 5-6 times faster than a hard drive in data travel and also the reason that we see a starting point of about a 90x increase in the information retrieval (disk access) from an SSD as compared to that of a hard drive.

Our first article explained how access speed is attained so quickly through the continuous flow of data in a SSD much like a pipeline in comparison to the mechanical movement, location and retrieval of data from a hard drive.  Unlike a hard drive which has only one route of information retrieval, the typical SSD can have as many as eight routes of travel or ‘channels’ as they are more commonly referred to.  So, if you can again refer back to the OWC SSD above you will note that their are 16 NAND flash memory chips that are used for storage.  This would mean that every two has its own channel ‘or highway’ by which to send and receive information.

In today’s SSD environment there are two common processors which differ in their means of storage.  The first utilizes compression to store data, debatably the most popular and a company named SandForce (recently purchased by LSI) is the only that has perfected it.  In observing performance benchmarks, a SandForce SSD can be easily identified as it is able to achieve almost equal read and write transfer speeds where others cannot do this.  This is only possible because SandForce has been able to achieve a 1 to .6 write ratio which allows for almost equal read and write performance.