Benefits Of A Solid State Drive – An SSD Primer

Laptop computers are now sporting a new option that is going to amaze most as a result of the visible speed improvement and many will never really understand why.

Some will boast of  how quick their new laptop starts while others will read the fine print to see that there is this new thing called a solid state drive which has replaced the hard drive. The latter will most likely comprise of those reading this article and wanting to know what a SSD is and how it does what it does.

Our article today hopes to be the beginning of efforts to tackle many of the questions surrounding solid state drives and today’s report will examine what exactly makes the SSD so special in today’s world of computing.  Follow-up reports will be added regularly to tackle the many questions the ‘new SSD enthusiast’ has about this new technology and we encourage comments and questions which will, in turn, form the direction we follow in assisting with your SSD education.

Solid state drives have been around for many more years than we would believe and have traditionally been relied upon in military, medical and aeronautical fields before their first entry into the consumer space in 2007.  By sheer coincidence, I was one of, if not, the first to receive a SSD enhanced laptop computer and remember writing a rather enthusiastic article which started things rolling for The SSD Review.  Even then, I remember going from a computer that took an eternity to start to one that started in 27 seconds.  I was amazed. 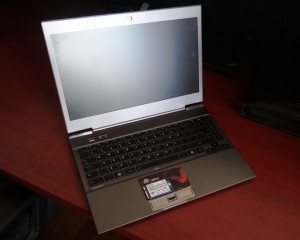 Although I would never pay such, that SSD pushed the selling price of that Dell XPS M1330 to just under $3500 and I went on to review other SSDs that were valued as high as $2500 for a 128GB capacity drive.

In fact, one company (from a very distant land) sent me a drive and made me promise not to send it back because of the probable implications of sending out such a high valued item at the time.

Today, we are seeing Ultrabooks that weigh less than 2.5 lbs are thinner than a pack of playing cards with a super speedy SSD that is one-third the size of a business card and the height of a 25 cent piece. Click on the picture for a high res enlargement.

The first question that most ask when entering an SSD conversation for the first time is, “What makes them so special?”  There are really a variety of answers for that question which will be different for each person.  For a university student or any professional really, how valuable is the data on your laptop?  I remember back when laptops first became  popular (dating myself here I know) and I dropped my work unit with a 380 page report on the hard drive that took me weeks to compile.  It then took me weeks to compile once again.  Would that security alone be worth the price of an SSD?

Lets take a close look at some of the benefits of a solid state drive that might appeal to the consumer:

START UP SPEED – The typical SSD starts up in about 15 seconds compared to a hard drive which takes over a minute. In considering the value of your time, a typical person starts their computer 5 times a day which would be a savings of  3 3/4 minutes per day of just under a full day a year…waiting for your computer to start.  What is a full day worth to you?

NO MOVING PARTS – An SSD has absolutely no moving parts, whereas a hard drive has a disk that spins as high as 7200RPM typically, or 67 miles per hour on its outer edge.  As you can imagine, this becomes a natural concern for such things as battery life, temperature, and endurance.  The hard drive is depicted on the left with SSD on the right.

TEMPERATURE – It is a given that a storage device that doesn’t spin at 67mph would be much cooler than a hard drive.  This becomes particularly important when consumers choose to utilize smaller laptops that are just over 1/2″ thick such as our Toshiba Z830 Ultrabook.

BATTERY LIFE – Since the first SSD review linked above, the increased battery life of laptops with SSDs has been very evident.  Today, we are seeing typical manufacturer advertisements of eight hour battery life while a few have been able to reach the ten hour mark.

PRACTICALLY INDESTRUCTIBLE – Solid state drives have been dropped from multistory buildings, run over by cars, used as hockey pucks while a player takes a slapshot and they have even been taped to the side of rockets simply to prove that they are as close to indestructible as it gets.

END LIFE DATA INTEGRITY – When a hard drive reaches end life and crashes, the information is gone.  When a SSD reaches end life, it does not crash.  It simply prevents further writing to the SSD and all information contained is fully accessible.  In fact, there have yet to be any predictions as to how long this information will last other than the life of the NAND flash memory for which the data is stored.

ENVIRONMENTAL FACTORS – The typical SSD can function in extreme high and low temperatures along with its ability to withstand extreme shock and force.  A quick check of the specs of one of the recent drives we reviewed, the Corsair Force GT, shows that it is able to operate in temperatures from -20 to 85 degC, 90% humidity, up to an altitude of 10,000 feet and can withstand the force of 1500G.  No wonder the SSD is such a hot commodity in fighter jets! Here is a first hand demonstration that we observed while visiting Memoright at Computex:

SYSTEM PERFORMANCE – System performance represents the most important aspect of hard drive to SSD transition which is why we left it to last.  This is initially evident in start up times which are a result of the incredibly fast disk access speed of the SSD which is typically 90 times faster than the hard drive.  It also filters down to application loading and general system performance, the reason of which comes down to basic mechanics of the two:

The below are examples of  a typical hard drive/SSD comparison which will clearly depict how hard drives slow while picking up larger files or in constant use.  These tests were done during article composition and compare our site storage drive, a Samsung 1.5TB HDD, to the Crucial M4 solid state drive that we use for a boot drive.

I was once asked to describe the SSDs performance, compared to that of a hard drive, in my own words and stated that it almost seems like the SSD knows what you are going to do before you do.  It is just that fast.  First time users are often amazed at the fact that every press of the keyboard is met with as close to instant response as one could imagine.  It is a very visible upgrade from a hard drive system and renders a great deal more enjoyment as well as productivity at the end of the day.

In case this article has reached you through one of the many search engines, we should mention that this is the third in our series of  SSD Primer articles meant to help us all along in our understand of solid state drives.