At this point in the game, SSD optimization is nothing new to technology and has become a very popular topic as a result of SSD popularity, coupled with Microsoft’s shutting down sales of Windows 7.  Microsoft wants the world to be a Windows 8 world, at least until Windows Blue arrives as originally discovered in our own Forum Community. Even more amusing is the fact that SSDs require no optimization whatsoever but they seem to be, well,  like a new car that one has to keep clean. We can’t resist learning each and ever characteristic and then fine tuning it until it purrs.

The SSD industry (and Microsoft) has made a definite step ahead in the incorporation of many important SSD optimizations in order to smooth the worlds transition from the dreaded hard drive to solid state.  Many of these optimizations go against the grain of most’s thinking, however through the past few years, we have seen just about every one that we recommended in 2010 accepted.  Back then, they told us we were losing our mind and a person would be nuts to follow our lead. 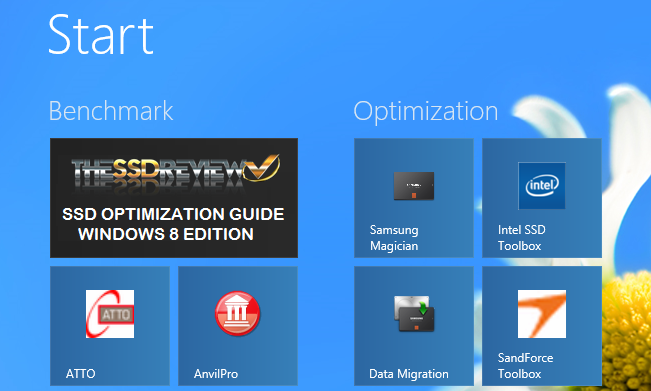 The SSD Optimization Guide Windows 8 Edition is our third in our series of such guides, the first published close to three years ago to the day which was redesigned last year.  A comparison of ‘yesterday’s and today’s’ will show many similarities, this because the engine at the heart of Windows 8 is still much the same as it was in Windows 7.  It is the fine tuning of Window’s 8 that make this guide so special. Our goal hasn’t changed as well.  We hope to provide you with as much as an understanding of each optimization, as well as helping you to weigh the pros and cons of making your final decision to complete that tweak.

IS YOUR COMPUTER SATA 2 OR SATA 3?

If you are upgrading to an SSD in your own system, it is important to understand whether your desktop (or portable) computer is SATA 2 or SATA 3 as this strikes directly to system performance.  With the introduction of solid state drives, the technology sector realized that faster disk access times and transfer speeds made possible a very visible performance increase in computers.  A traditional computer is SATA 2 and capable of transfer performance up to roughly 275MB/s read and write speeds while newer SATA 3 solutions are capable of over 500MB/s read and write performance, almost double the speed.

Did you know that SATA 2 and 3 actually refers only to the interface that you plug your systems data cable in to?  SATA =  Serial ATA = Serial Advanced Technology Attachment

The good news is that all SATA 3 SSDs are fully backward compatible to SATA 2, however, understanding the difference can save you days of frustration wondering why your SATA 2 PC is not hitting manufacturer listed performance of 500MB/s transfer.  Do you want to know a secret?  For a typical user, the difference is moot as they will probably never be able to visibly observe a difference between SATA 2 and SATA 3.  The difference between a hard drive and an SSD, on the other hand, is absolutely amazing!  It is an entirely new experience for most.

IS IT A SSD, HYBRID SYSTEM, CACHED SSD OR HYBRID SSD

First up on our list is our choice of storage medium.  A hybrid SSD is a hard drive with contained flash modules that claim to increase performance to that hard drive.  Unless your performance is limited only to start times, we don’t feel this a viable consideration.  A cached SSD, on the other hand, is a solid state drive that may be purchased with a user installed caching program.  The most popular caching program that we have seen and tested to date is Samsung’s own NVELO Dataplex Caching Software.

NVELO Dataplex caching software increases the speed of your hard drive to that of the SSD through caching of ‘hot’ or frequently used data.  This data includes all OS functions and the start process which increases your hard drive speed significantly. Manufacturers such as Crucial, OCZ, Mushkin and Corsair have jumped aboard the NVELO train and provide solutions in sizes ranging from 30 to 128GB, capacity being the key element in disk caching that hasn’t been realized in hybrid hard drive solutions to date.

Although we are SSD through and through here at TSSDR, we have very positive support for any NVELO Dataplex caching solution and, if this seems the way to go, check out product availability at Amazon. NVELO Dataplex is the ONLY caching solution that can make cached hard drive transfer performance of 550MB/s read and 510MB/s write with up to 80,000 IOPS a reality.

Not get too confusing but a hybrid laptop may be a laptop with an SSD and caching solution, as we recently tested with the new Sony VAIO T14 Touch Ultrabook where a 32GB ‘SandForce Driven’ SSD was used with Condusiv ExpressCache.

Our solid recommendation is always an SSD (or SSD with hard drive for data) and the SSD Optimization Guide is only of value to systems that use an SSD as their primary drive and their operating system and/or software and data is installed.  For those that have to have that capacity, we will get to a trick for moving your ‘Documents’ folder off of the SSD and on to the hard drive.

CAN WINDOWS 7 USERS BENEFIT AS WELL?

In a word…yes.  Much of what we are going to describe is the same in Windows 7 as it is in Windows 8, given exception to the route we follow or a few changes here and there.  We have added some significant performance enhancements that both Windows 7 and 8 users can try to significantly increase the speed of their system.

It is important that readers follow our direction exactly, and regardless, any changes you make to your own system is of your own choice and we are not responsible IN ANY WAY for unexpected results that may occur.

Consideration should be given as to whether you will migrate or conduct a fresh OS installation when moving from a hard drive to SSD.  Our most common ‘troubleshooting’ issue has always involved those who have followed the SSD migration route.  We ALWAYS recommend a fresh installation and following of this guide, or the original SSD Optimization Guide.  The reasoning is not always known but, in migrating from a hard drive to SSD, some experience a significant performance drop in the first few days after migration, most of the time because TRIM isn’t working.

We should understand that we are migrating a well established system, that has never understood the workings of TRIM, and expecting the new OS to fall in place and function properly. Most of the time it does. Some of the time it doesn’t and the end solution is a fresh install well after the fact.  Our Beginners Guide contains a plethora of valuable SSD knowledge (always wanted to use that word), to which we have an article entitled ‘SSD Migration or Fresh Install’ that you might be interested in.

SSD Optimizations are conducted to improve performance, increase SSD capacity and to increase write endurance.  They all help to strengthen system stability. Most of us will never see the ‘end life’ of our SSD so write endurance is not so crucial, however, we just love the feeling of having a solid system that has been fine tuned for increased performance and capacity. Throughout this Guide, we will put forward optimizations, in an order that we would follow, explaining the purpose of each and highlighting the main reasoning for that tweak, be it to increase performance, capacity or write endurance.

1. AHCI MODE AND NOT IDE – PERFORMANCE

The performance increase between a computer in AHCI mode, as compared to IDE, is just over 15%.  Most computers today are in AHCI, by default, but occasionally we encounter otherwise from our readers.  Checking your BIOS does the trick but may be a bit difficult for some.  The easist way is to check your SSDs properties in System devices.

Clicking on any of our photographs will bring up a higher resolution copy for your viewing ease.