System Restore and Your SSD

Solid state drives were first released to the consumer in the latter part of 2007 to which I was fotunate to be one of the first to publish a SSD review that is still available on our site today.

At one point in the past few years, it became common knowledge in the industry that solid state drives would suffer performance degradation with age.

I found this very unusual because, for the most part, I had not experienced this with any of my drives and believe me, they have all been around the block a few times in the past few years.  I have tested drives from pretty much each and every manufacturer including form factors of mSATA, SATA, mPCIe and PCIe.

In an effort to find out why my drives were running so well, I examined what I was doing different than the average consumer and, more specifically, how my system setup could contribute to this.  Three things stood out.  I have been running 64 Bit on my system since before it was even believed to be viable.  Would you believe I had a small part in the push for Dell to introduce it to the market and also, people used to laugh and think I was ridiculous to believe it would ever make it?

The other two variables were that I don’t run a Pagefile and haven’t run System Restore since my first SSD in 2007.  Simply, I believe Pagefile was created for systems that didn’t have adequate RAM and we have allowed it to become a crutch now that RAM is affordable.  I also I found it much easier to simply backup regularly than allow System Restore to do its magic.

In considering all points, I was a bit confused except one thing stuck with me.  System Restore grows as it backs up your system and changes your storage characteristics as it continually establishes new restore points.  This seemed like a common sense approach to think it might be related to System Restore..

I have been watching SSDs for some time and observed that non-TRIM SSDs such as the Intel X25-m G1 were particularly prone to this phenomenon of degradation which continued to be present through the introduction of the Intel G2 with TRIM.  I purchased and installed a Intel X25-m G2 160Gb SSD.  In the process, I elected to leave System Restore on because, well, I was about to rip apart the OS in order to see how it ran best with a SSD and would want to be jumping back and forth.

I am also a performance nut and rely heavily on Crystal Disk Mark as it provides one with both large sequential as well as 4kb random performance evaluations for your SSD. Two weeks after playing around with my system, I observed a large drop in the performance of my SSD.  I wish I had kept the original result so I could post it here but no fear, I will have a test for you to try later on. Here is what Crystal Disk Mark looks like:. 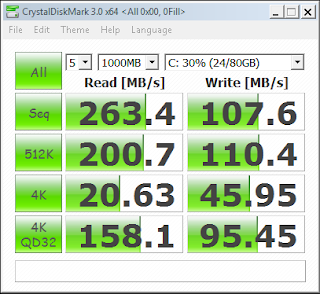 Parallel to this, I had also installed and used the Intel SSD Toolbox Optimizer twice and observed both times that it took an extremely long time to manually do what TRIM was supposed to be doing. Quite frankly, it took over an hour.  I wondered, in fact, if TRIM was working at all.

I subsequently tried everything to no avail and, only after I shut off System Restore and the file was deleted, did I see a sudden jump in the performance again.  Performance returned to where it should be in fact.  My next trick was to try the Intel SSD Toolbox Optimizer.  I did and it took a split second as I was always informed that it should.  Maybe we have hit on something here!?!?

Is it possible that the way System Restore allocates its restore points makes it difficult or even prevents TRIM from running properly?

Its been several months now and my system is purring like a kitten.  I have absolutely no slowing or performance loss of any kind and the Intel Optimizer continually works in a split second to finish its job.  I subsequently put the thought out with Intel where it went unanswered and have posted with respect to it on approximately 10 technology sites.  I have to concede that I have yet to have anyone confirm this scientifically other than most, including Intel, jumping on the train and recommending that System Restore be turned off with a SSD.  Go Figure!!!

What I have garnished is a million thank you’s along the way from SSD enthusiasts who discovered that this was the cause to sudden slowing observed with their SSDs.  In fact, I have yet to have the theory disputed and I felt that Intel might be the first to jump on this.

Here we go. It is simple.

Alot of confirmation has occurred to enable my writing of this article yet there is very little education or confirmation about the web.  I would believe it is simply a matter of Intel, or any other SSD manufacturer, not wanting to ask one to shut down a system resource that has always been considered so valuable.

If you elect to follow the test procedure, please comment one way or another.  I am very interested with any further proof or constructive thoughts that may prove or disprove my theory.  As it stands, I have been waiting a very long time for an answer from Intel, yet many have thanked me for helping them discover why their SSD has slowed since installation of the OS.