Since the beginning of time… ok maybe not that long ago but since SSDs were introduced to the consumer, we all knew that a time would come where SATA just might near extinction.  Long story short for those who aren’t sure of what we are talking about…  SATA is a protocol which was originally created for magnetic hard drives and is restricted to moving data (for the most part) at a speed just over 500MB/s.  As good at this might be for those who simply pick up their PC to do a word document or a few e-mails daily, it’s not appropriate for today’s media… or even transferring media for the most part, where speeds as fast as 3.5GB/s (7x faster) can be achieved .  But let’s step back a bit further.

Even today, one of my favorite discussions in the tech world is speaking on the difference between hard drives (SATA) and SSDs (SATA or NVMe today).  If I explained to you that your PC could start in 15-20 seconds, would run cooler, would be completely silent, could have a longer battery life and run noticeably faster…so fast in fact that it might seem like your keyboard knew what key to press before you actually pressed it….would you be interested?  Of course you would and that is the difference between a hard drive and a SSD.  In fact, moving from a hard drive to a SATA SSD achieves that in itself… so how do we get to the next step?  How do we make our computer 3-7 times faster than it is right now? 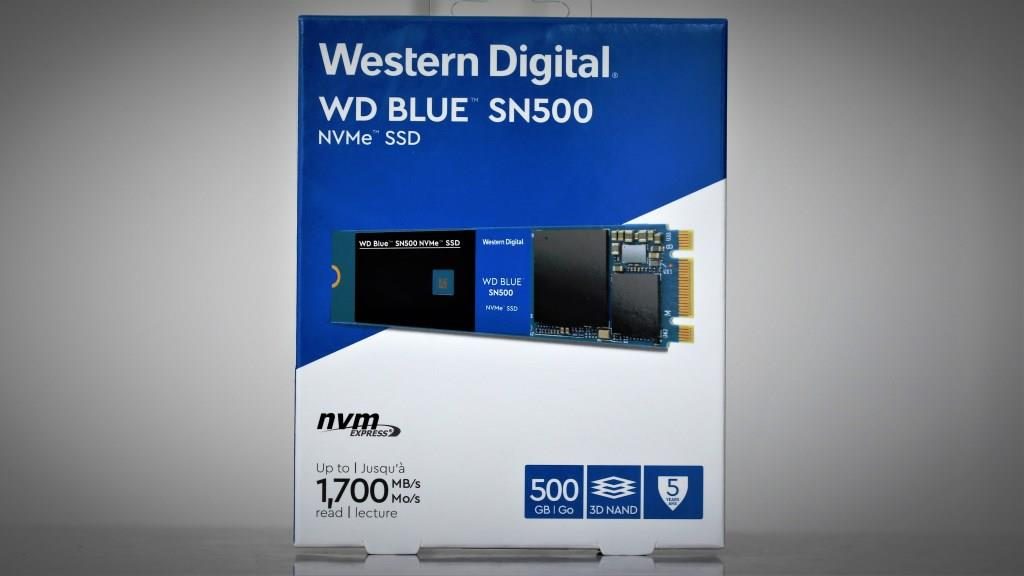 The difficulty has always been in the sale and since the beginning of time (here we go again), we have always professed that there are three main factors that would sell SSDs; price, performance and warranty, warranty of course encompassing quality and endurance.  We want to complete the transition to SSDs by moving to NVMe from SATA, thus bringing us into much faster performance for a compatible price, and of course having a warranty that represents the quality of the SSD.  The problem of course is that when moving to 7x the performance we can’t hit the price point we want.  We want a NVMe SSD to be the same price as a SATA SSD.  We would like 1700MB/s transfer speed for the price of 550MB/s speed.  We need to find the middle ground and Western Digital just may have done that. 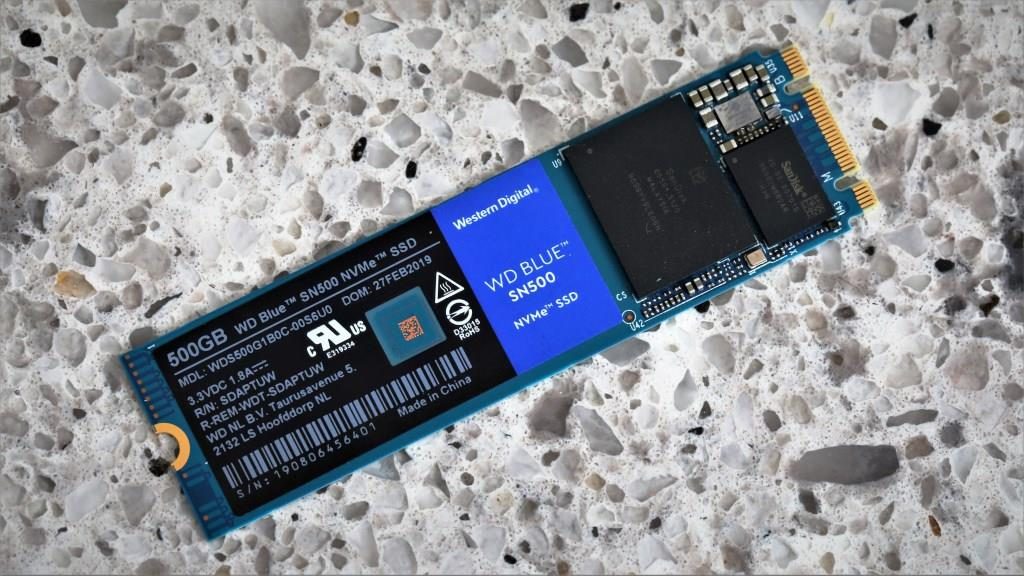 The Western Digital Blue SN500 M.2 SSD is a PCIe x2 (two lane) which uses the NVMe 1.3 protocol and is available in 250 and 500GB capacities.  The difference between this and most M.2 SSDs today is that it is uses two PCIe lanes vice four.  This cuts performance just about in have from enthusiast SSDs but that applies just the same to the price point.  With a MSRP of $77.99, the 500GB version of the SN500 that we are testing today has listed specifications of 1700MB/s read and 1450MB/s write with 275K IOPS read and 300K IOPS at low 4K random disk access.

Typically, the MSRP is just a bit higher than we might see once the drive has been available for a month or so and it is worth noting that, even at this price, this SSD is only a few dollars above SATA SSDs of the same capacity.  Looking at the 250MB version of the WD Blue SN500, the MSRP is $54.99 for performance of 1700MB/s read and 1350MB/s write, along with 170K IOPS read and 210K IOPS write.   Not bad at all for SSDs with a 5-year limited warranty. Check Amazon pricing Now.

Remember the three things we mentioned; price, performance and warranty. 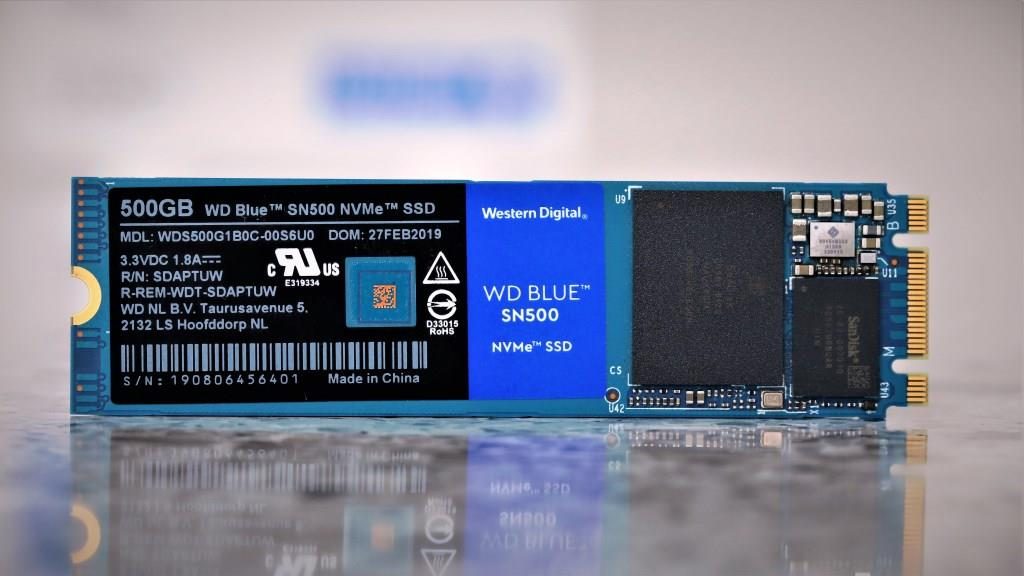 The WD Blue SN500 is most definitely one of the most attractive SSDs we have seen in a while.  Situated on a blue PCB are only a single SanDisk 64-layer 3D TLC NAND flash memory chip and much smaller SanDisk in-house controller.  This SSD is a single sided SSD and situated on the top right are a number of small capacitors as this SSD has power-loss protection and thermal throttling. 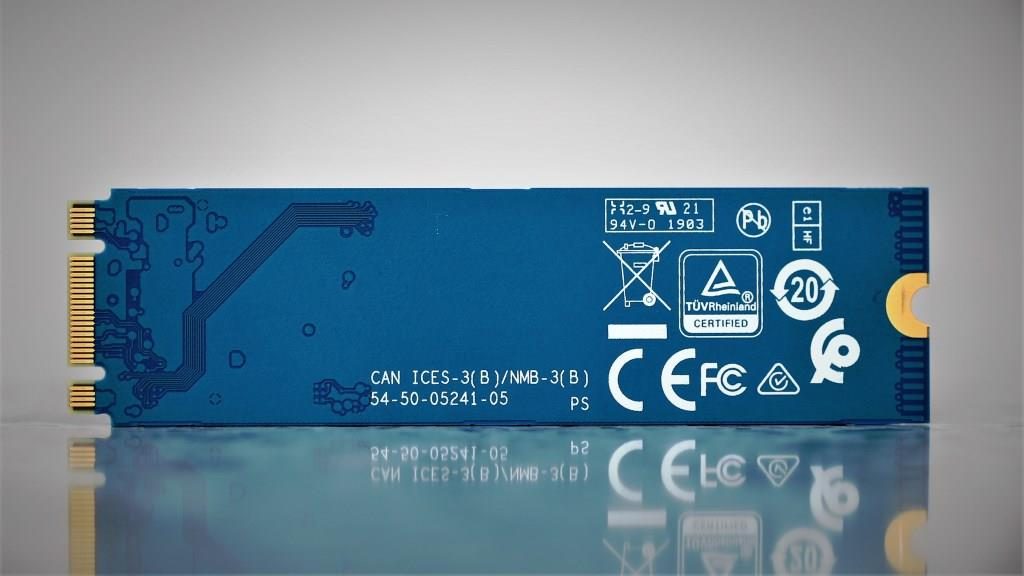