UL Solutions has created a new storage gaming benchmark that we will start to use as new SSDs come in.  The 3DMark Storage Benchmark DLC extends 3DMark Advanced Edition with a dedicated component test for measuring the gaming performance of SSDs and other storage hardware. It supports all the latest storage technologies and tests practical, real-world gaming performance for activities such as loading games, saving progress, installing game files, and recording gameplay video streams. 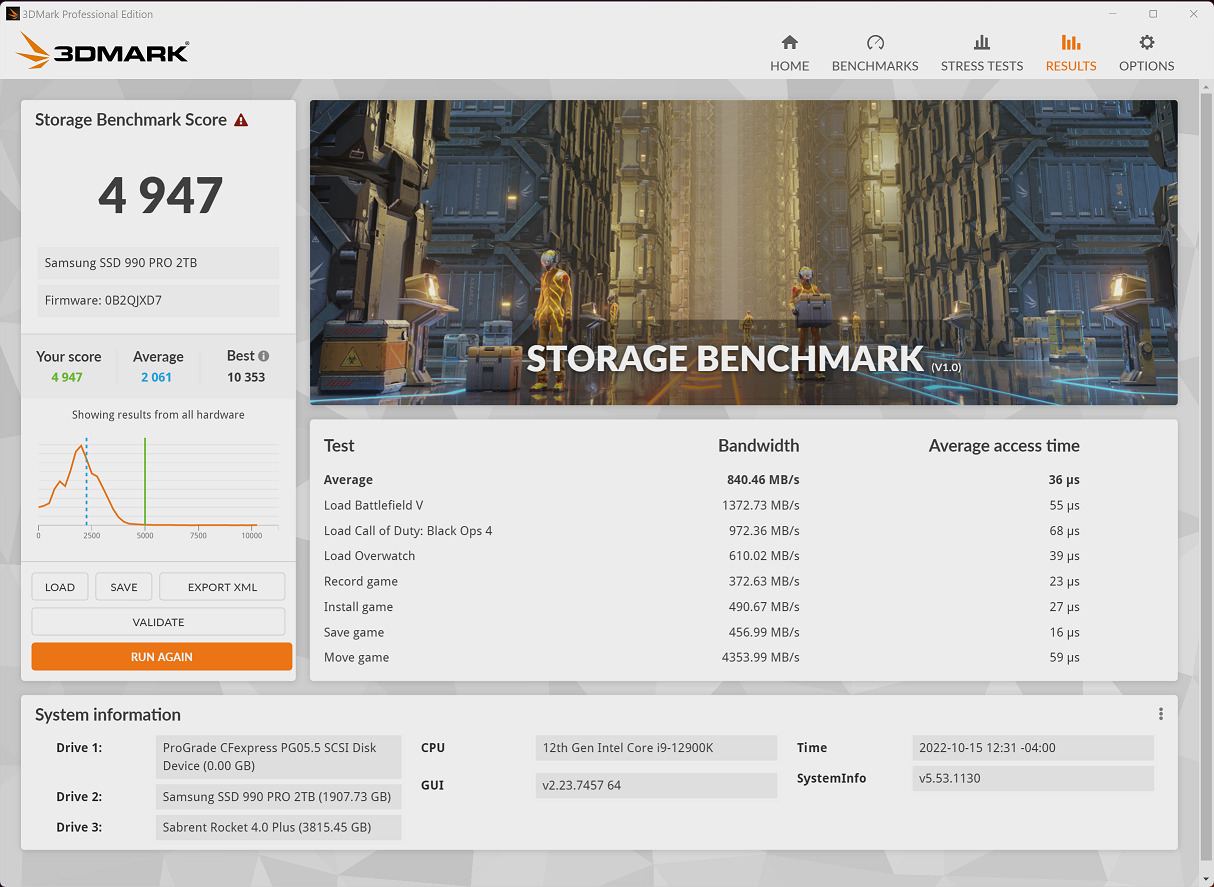 3DMark is a fairly new tool in our toolbox and we have only tested a few other drives to date,  the SK hynix Platinum P41 scoring a 4225 and the KIOXIA XG8 client SSD achieving 3812.  At 4947 Total Points, the Samsung 990 Pro did well once again.

Where to start… I’m just a bit… breathless.  The Samsung 990 was an unexpected and rather late arrival, however, we can guarantee this performance wasn’t imagined by anyone that has tested it.  If you are a reviewer and this SSD doesn’t seem pretty special to ya, call Samsung because you received a dud.  Tested on our Intel Z690 Test Bench, this SSD pulled in some of the best metrics we have seen with over 7.1GB/s read and 6.7GB/s write and read and write IOPS topping 1.4 million. In our True Data Testing, the 990 Pro surpassed even the Intel Optane!

Those numbers alone aren’t the key here though.  That Crystal DiskMark low 4k random read result surpassing 100MB/s is all that.  And it wasn’t a one off.  That result came through in Crystal DiskMark and then repeated itself in AS SSD, TxBench and even Anvil Disk Benchmark. This was followed by the best results we have seen in true gaming benchmark tests to include 3D Mark and PCMark 10.

The Samsung 990 Pro just may be the SSD we might never have expected to see…as a consumer SSD.  This drive has the genetics of enterprise storage if we have ever seen one, has decent pricing and a comfortable 5-year warranty .  Great Work Samsung. Editor’s Choice!

The Samsung 990 Pro Gen 4 SSD has just about the best performance we have seen in a consumer branded M.2 SSD. It comes in with decent pricing and a great 5-year warranty.