One of the oldest players in the SSD world is Samsung.  They have been around since the beginning and were the first to release SSDs on the retail side way back in April of 2008, right there beside SanDisk.  Back then, we had the Samsung 64GB SLC SATA II SSD priced at a high of $1130… for 64GB!  Flash memory has progressed and I am somewhat speechless that The SSD Review has been in this space since that period.

We have witnessed NAND flash memory advance from SLC (single level cell) to MLC multi-level cell), TLC (triple level cell)  and then QLC (quad-level cell). Even better yet, the industry seems to have stabilized with manufacturers perfecting what we see in today’s TLC SSDs.  We have come to understand that SSD controllers may continue to progress, but memory is the key to end user performance.  We think Samsung may have perfected this with their latest 990 Pro Gen 4 NVMe SSD.  No surprise here… this SSD is the best we have had in our hands yet and then some. 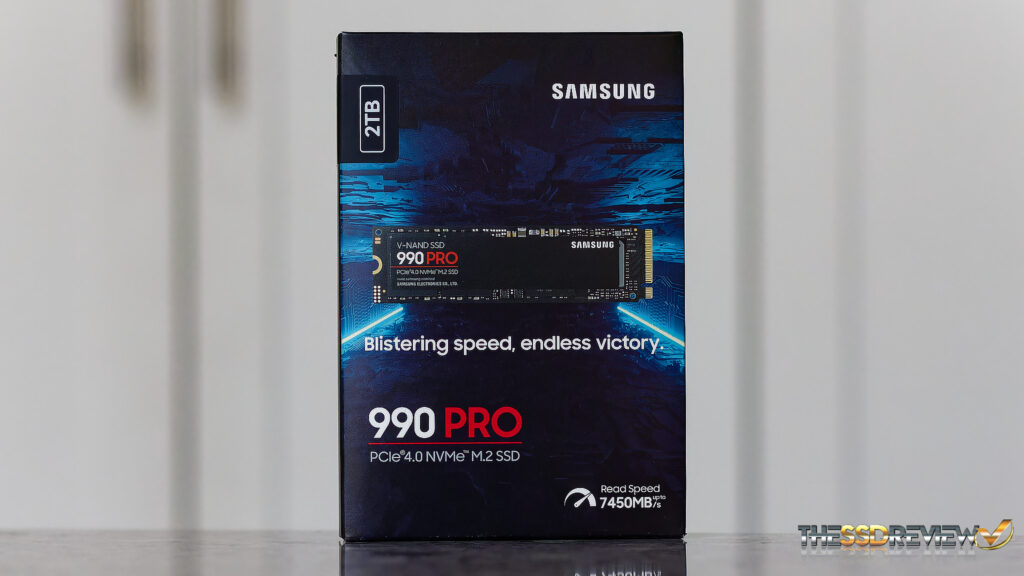 MSRP pricing is expected to be $170 for the 1TB and $290 for the 2TB, with a slight bump of $20 for the heatsink included models.  Check Amazon for pricing. This includes a 5-year written warranty with 1.5 million hours MTBF and 600TBW (1TB) and double that for the 2TB capacity.

A close look at this photo above depicts a very thin heatsink, that of which has been specifically designed to fit into the Sony Playstation 5.

On our Test Bench, we have the 2TB version and this is a single sided M.2 SSD containing only two NAND flash memory chips of 1TB each before SSD formatting.  Once formatted, there is 1863GB of storage space available to the user.

The Samsung 990 Pro Gen 4 SSD has a proprietary PCIe 4.0 NVMe 8nm controller that goes by the nickname ‘Pascal’ along with a 2GB LPDDR4 memory buffer, 1TB buffer for the 1TB capacity.  Next to this we have two chips of Samsung 176-layer TLC NAND flash memory.

Carry on to the next pages for some rather in-depth testing and comparisons.  We think you may be impressed.