Crystal Disk Benchmark is used to measure read and write performance through sampling of raw (0/1 Fill/compressible) or random data which is, for the most part, incompressible. Many new ‘SandForce Driven’ SSD owners who can’t wait to test the performance of their SSD often grab this program and run a quick test, not realizing that they are testing with incompressible data rather than compressible data used in testing by manufacturers. 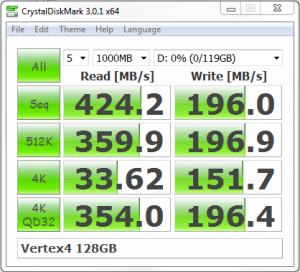 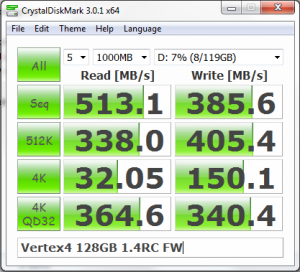 The CDM results echo the immense change in throughput associated with the new release candidate FW. 4K results at a queue depth of one have not really changed from 1.3 to 1.4RC, but almost everything else has. The change in sequential read speed is substantial, from 424MB/s to 512MB/s. While 99% of transfers don’t occur at these high sequential transfer sizes, it’s nevertheless good to see. Of course, the newly found write speed is the star of the show: 385MB/s at 4MB sequential writes and 405MB/s at 512K speaks volumes about the V4’s new abilities.

The other notable change, QD32 4K writes, is somewhat expected. After all, the 1.3FW was rated for 90,000 IOPS on the 128GB Vertex 4. In practice, the number is hard to achieve. On the left, 196.4MB/s equates to 47K IOPS, typical of numbers seen in testing and nearly half of the rated spec. The new release candidate 1.4FW addresses that shortcoming in style, coming in at 340.4MB/s (equivalent to around 83K IOPS). We’ll do some IOPS testing later, but for now all the boxes are checked and looking good.

If the QD1 4K random writes look a little high at 150MB/s, that’s because they are. While the Vertex 4 128GB already has stunning low queue depth random performance, the changes to the testing environment are at play here as well. These are the highest QD1 4K random writes to date, but they are not directly comparable to other reviews. Reducing CPU clock speed variance during testing not only helps reduce inconsistency, but it also elevates bench scores. QD1 randoms are most affected when typical CPU power saving features are used, so disabling those features tends to raise them significantly.

Up until recently, AS SSD was the only benchmark created specifically for SSD testing and it tests through use of incompressible data which shows us the ‘worse case’ performance scenario in SSD transfer speeds (when using SandForce-powered SSDs). Many enthusiasts prefer benchmarking with AS SSD for their needs. 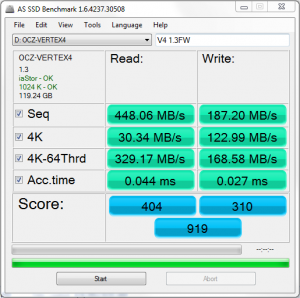 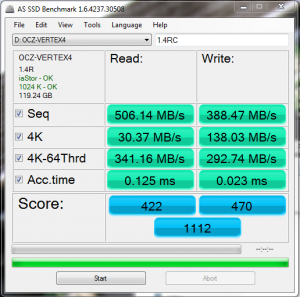 The 128GB V4 puts in a reasonable showing on 1.3FW, but is eclipsed by the 1.4RC. In fact, if you didn’t know any better, you’d just assume the drive on the left was 128GB and the one on the right was 256GB… such is the performance variance. Again, write speeds are practically doubled. Read speed is higher, and random performance is better at both low and high queue depths. The overall score goes from 919 to 1112. The only other consumer SATA III SSDs tested that get this kind of score are the other Vertex 4s.

It might be a good time to point out that the 128GB on 1.3FW is very consistent and yields similar results in test after test. On 1.4RC, that changes. AS SSD uses an average approach, so this helps minimize the inconsistency but there are still changes from test run to test run, especially sequential read and writes.

While the composite score may not mean much, it’s interesting to see. AS SSD’s 512 byte access time measurements are already great for writes, but the new firmware would seem to triple read access latency from .044ms to .125ms. 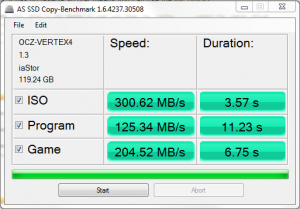 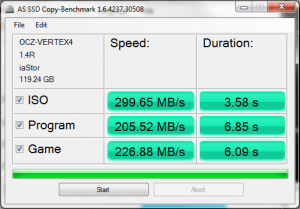 AS SSD’s copy benchmark emulates file transfers of different sizes and compressibility. ISO, Program, and Game copy operations are timed to give users an idea about real world copy speeds. The 1.3FW has a surprise here: the ISO copy completed at 300MB/s. Since the 1.3FW is capped at 200MB/s, it’s difficult to know what is transpiring here. The 1.4FW almost halves the Program copy time.