If you thought the most exciting improvements with OCZ’s new Vertex 4 firmware were reserved for the 256GB and 512GB models, you’d be wrong. As it happens, the most interesting and substantial performance improvements are to be had with the 128GB Vertex 4.

We happen to have a 128GB Vertex 4 on our bench in order to find out what makes it and the new Vertex 4 1.4 Release Candidate firmware worth a look.

The Vertex 4 possessed many desirable characteristics at launch, but also many puzzling attributes. For example, despite it’s brutal speed, it could barely compete with it’s contemporaries in Vantage testing. New firmware addressing some initial shortcomings was promised, and now OCZ has delivered. Though still in a pre-release stage, OCZ has made the upgrade available for the adventurous enthusiast. Does the new firmware increase performance? Is it worth the upgrade from a stable 1.3FW release to a release candidate? To find out, we’re putting a 128GB Vertex 4 though the gauntlet with both firmwares. 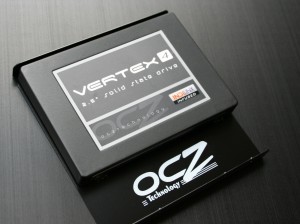 The 128GB Vertex4 isn’t the fastest member of the new OCZ flagship family. With sequential reads of up to 535MB/s and sequential writes up to 200MB/s, the “junior 4” falls behind the performance of it’s big brothers. All three are said to have nearly the same random performance though: 85,000 random write IOPS and 90,000 random read IOPS (95K for the 512GB). Each is also given a “max IOPS” figure: 120,000. Digging a little deeper, it appears that this number is generated from 512 byte random accesses at high queue depths.

, respectively. Each Vertex 4 is given a five year warranty to bring it in line with Intel, Plextor, and OWC’s premium offerings.

The 4’s Everest 2 platform is composed of a Marvell processor strapped with OCZ’s 1.3 version firmware. Riding shotgun on the PCB is 1024MB of DRAM, or put another way, more memory than came standard on most laptops before 2005. The 128GB doesn’t make use of all that cache, and only the 512GB model makes use of the whole GB. The package is completed with sixteen 64gbit ONFi NAND modules, each 8GB in capacity. After formatting, users are left with a little over 119GB of the 128GB onboard, which amounts to zero percent over-provisioning.

After voiding the warranty and removing the case screws, the PCB is available for pictures. The plastic housing hides one of the most intricate and visually interesting PCBs around, packed to the gills with traces and surface mount components. The Indilinx-badged controller is surrounded by eight flash packages and 512MB DRAM. Given some of the characteristics of the drive, the controller could be a variant of the new Marvell 88SS9184.

The opposite side, just as visually interesting, holds the remaining 512MB Micron DRAM IC and the other eight Intel 29F64G08ACME3 NAND packages. Some drives may have identical Micron flash in the future, but so far most shipping drives appear to use the Intel-branded IMFT flash. Either way, the Vertex 4 will have 3,000 PE (program/erase) cycle flash in it, regardless of whether it says Intel or Micron on the flash.

If you compare the PCB shots from this sample and the original Vertex 4 512GB we reviewed in April, you’ll notice some visual differences. The golden traces are much more visible and the Indilinx branding on the controller is not as white on this 128GB version.

The V4 makes good use of the 3K PE cycle NAND with it’s 128bit ECC (Error Correcting Code). With the more advanced ECC engine, the Marvell processor and Indilinx firmware should be able to get every last bit of endurance out of lower-PE flash.