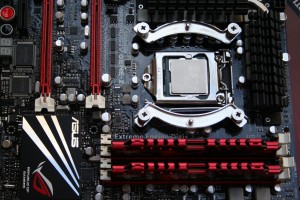 The Intel Rapid Storage Technology storage driver version 10.6.0.1002 is used for all testing. Windows Search and Indexing are also enabled, as are Speed Step and Turbo. Stock Sandy Bridge Turbo ratios are also used for the i5-2500K.

To better discern the subtle difference between firmware revisions, a separate testing methodology has been employed. To eliminate subtle testing variations when looking at sub-millisecond latencies in IOmeter and other test programs, the testing environment has been modified. By eliminating CPU voltage and frequency changes, associated latency variance has been minimized. Speed Step and Turbo have been disabled, and CPU frequency is set at 3.3GHz. Without this modification, CPU speed and voltage switching during test runs can lead to inconsistent or contradictory results.

Software utilized for this review consists of ATTO Disk Benchmark, CrystalDiskMark, AS SSD, Anvil Storage Utilities, and PCMark Vantage. All do a great job of showing us the numbers that we want to see, or don’t want to see in some cases. PCMark Vantage x64 is an excellent program which recreates tests that mimic the average user’s activity, all the while providing a medium to measure each. 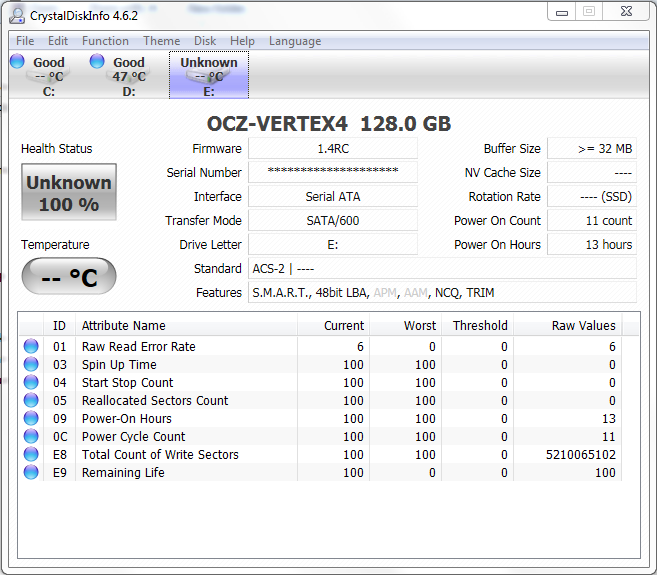 The Vertex4 is somewhat improved in the SMART department over it’s Octane cousin. Highlights include a write counter to display total writes to the drive, though not much else is of intererest. The Remaining Life attribute takes reallocated sectors and average erase count into consideration to yield a percentage of drive health.

ATTO Disk Benchmark is perhaps one of the oldest benchmarks going and is definitely the main staple for manufacturer performance specifications. ATTO uses RAW data, which removes the file system overhead. For our benchmarks, we use a set length of 256mb and test both the read and write performance of various transfer sizes ranging from 0.5 to 8192kb. Manufacturers prefer this method of testing as it deals with zero-fill data rather than random and shows better performance than benchmarks which operate through the file system. 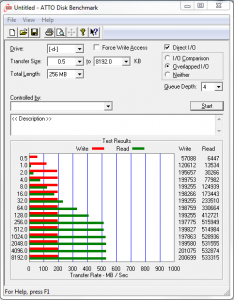 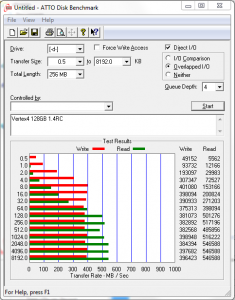 The ATTO results for the old 1.3FW (left) and the new 1.4 RC firmware (right) show some impressive differences right off the bat. Max reads with 1.3 are 533MB/s, while 1.4RC shows a 15MB/s improvement, up to 548MB/s. Obviously, the big story here is the writes: max sequential write speed has practically doubled, from a max of 201MB/s to 396MB/s with the new release candidate. Not bad for a few moments of work using the Windows Toolbox updater. ATTO tests sequentially at a queue depth of four, so let’s see what happens with more relevant benchmarks.