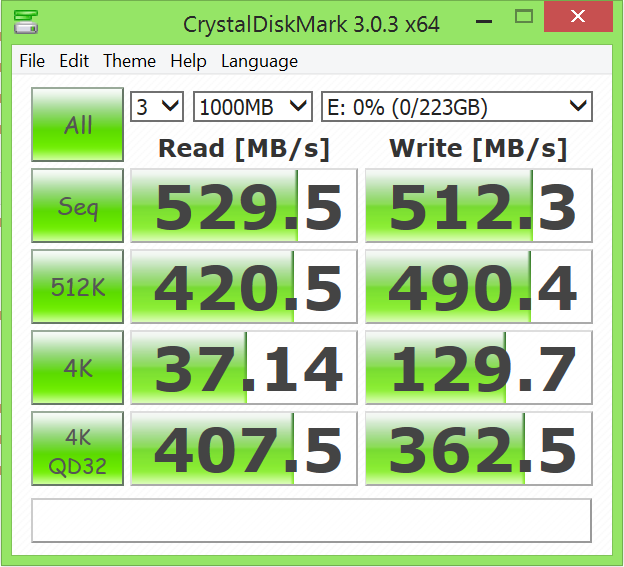 Not only are the high sequential results of the Corsair Neutron XT very strong, but also, 4K speeds are just as strong in both 4K and 4K-QD32.

Once again, we have very high transfer speeds that are complemented by IOPS just under the 100K specification, both of which contribute to a very high Total Score for any notebook factor SATA III SSD.

The AS SSD Copy Benchmark was perhaps the only time we saw any sign of a dip in the Corsair Neutron XT, as can be seen with the low Speed/Duration when transferring program data.

Anvil’s Storage Utilities (ASU) are the most complete test bed available for the solid state drive today.  The benchmark displays test results for, not only throughput but also, IOPS and Disk Access Times.  Not only does it have a preset SSD benchmark, but also, it has included such things as endurance testing and threaded I/O read, write and mixed tests, all of which are very simple to understand and use in our benchmark testing.

Although our sequential write speed dropped just a bit, both IOPS and the Total Score once again identify the Corsair Neutron XT as a very solid SSD.  Let’s see if we can get a bit closer to specs with IOPS…

Both read and write IOPS provided IOPS just short of specs at QD32.

The Corsair pulled through Vantage testing with a high Total Score of 78979 points and a high transfer speed of 465MB/s when testing in Windows Media Center.  Even more interesting, however, is the pattern of performance where we see very strong results in the first six tests, where the final two lag; perhaps this being an attribute of the new X99 chipset or the new Phison controller.

Our PCMark Vantage Hierarchy Chart shows us the Top Ten 2.5″ SATA 3 SSDs to date, keeping in mind that this chart is based solely on PCMark Vantage Total Score results alone: