Anvil Storage Utilities (ASU) are the most complete test bed available for the solid state drive today.  The benchmark displays test results for, not only throughput but also, IOPS and Disk Access Times.  Not only does it have a preset SSD benchmark, but also, it has included such things as endurance testing and threaded I/O read, write and mixed tests, all of which are very simple to understand and use in our benchmark testing. 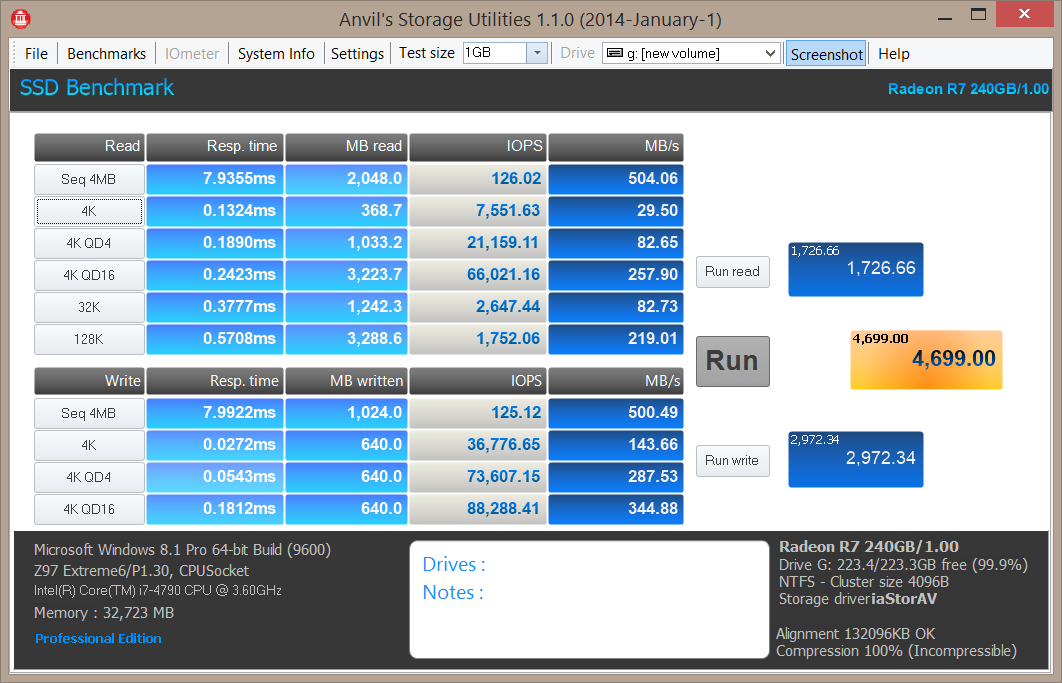 Once again, we see decent speeds through Anvil Storage Utilities, and also get a good look at Disk Access times on the left.  As we saw with AS SSD, the overall score is very good once again.

The AMD Radeon R7 SSD pulls in a respectable Total Score of 73924 points, with a high transfer speed of 455MB/s when testing in Windows media center.  In fact, 6 of the 8 tests resulted in very healthy SATA 3 results, the likes of which we don’t often see. 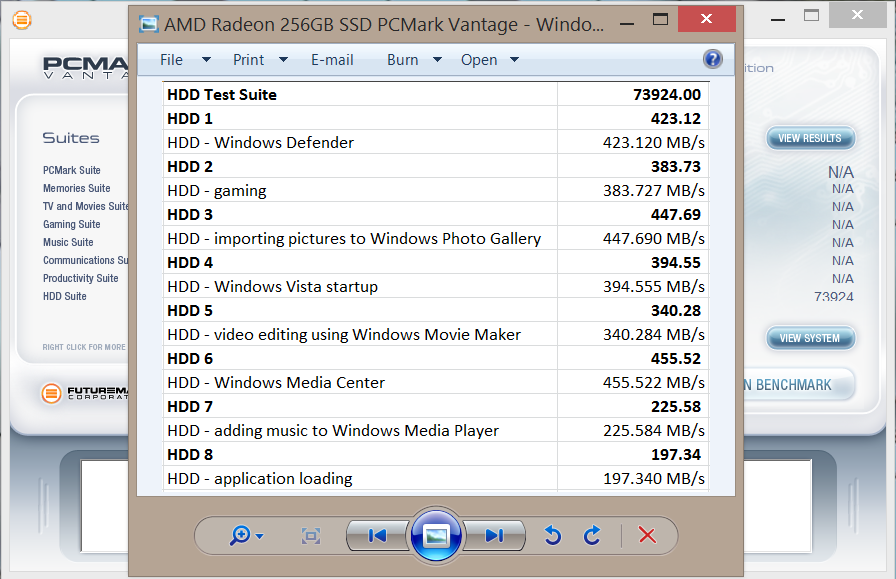 For many, the simple fact that AMD has partnered up with OCZ is a definite step in the right direction, but even in the midst of some hard times, the acquisition of Indilinx and their controller was a very smart move.  The Barefoot 3 has already shown itself to be one of the strongest SATA 3 controllers in the industry and AMD obviously recognized this when they were considering their choices for high performance and gaming. 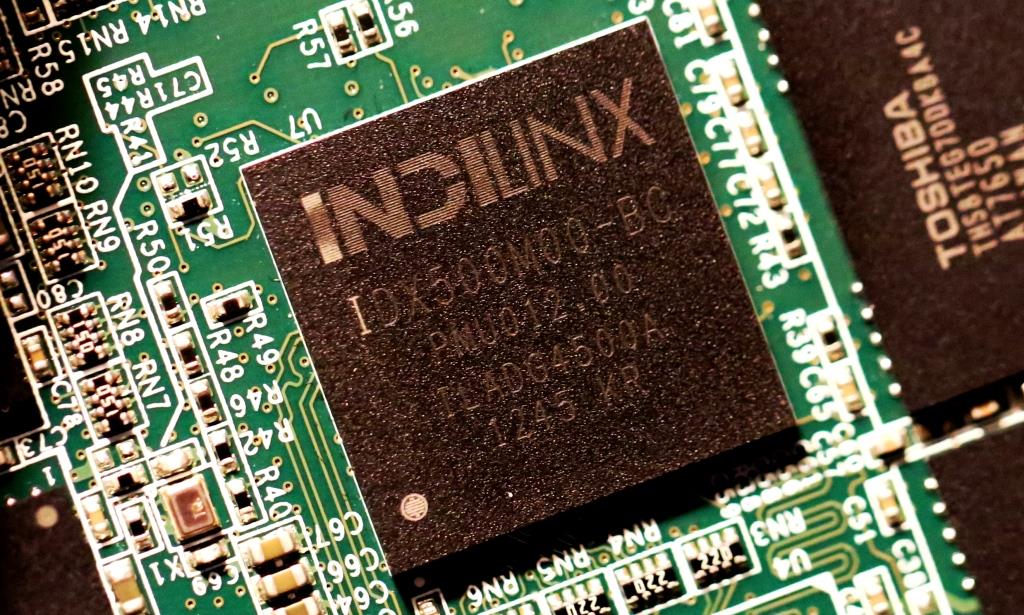 As much as we like this controller, however, there were a few minor observations that we noticed, the most obvious being the low write 4K speed we observed in ATTO and we might liked to have seen the PCMark Vantage Total score just a bit higher.  Then again, these are individual benchmarks and there is good reason why we include a battery of tests rather than just relying on one or two.  Overall, performance of the AMD Radeon R7 was definitely right up there with specifications and features such as 256-bit AES encryption, endurance of 30GB per day in drive writes, along with the 4 year warranty, make this an SSD to definitely have a close look at. 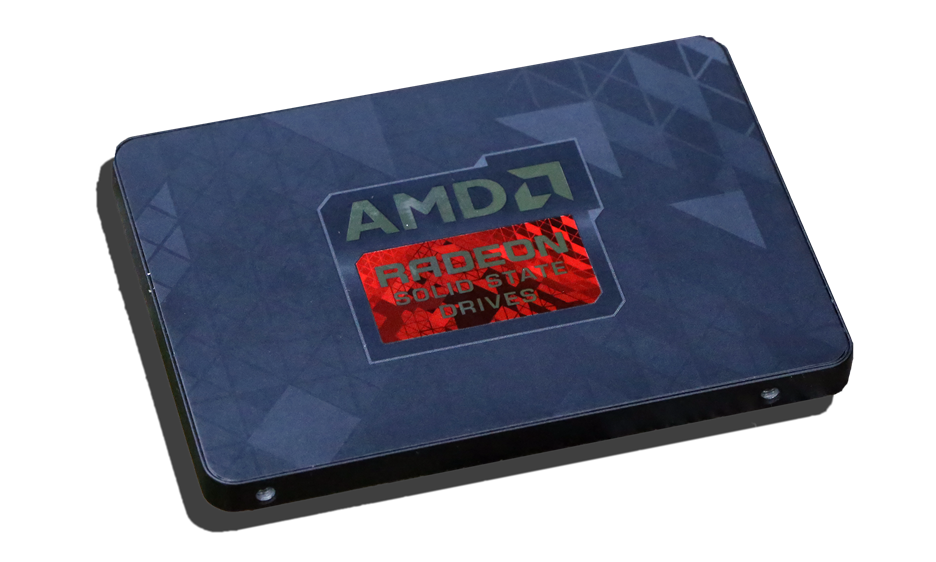 All in all, there are many qualities that we like about the AMD Radeon R7 SSD and it is definitely  an SSD that we would recommend, as well as being worthy of our Bronze Seal. 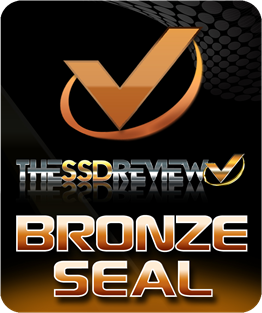 With a solid build, decent performance, a great warranty, along with the necessary accessories for system migration, the OCZ AMD Radeon R7 SSD is definitely a serious contender.

Thanks for sharing Craig!

I’m willing to forget all my former bad experiences with them and try this drive or the Vector 150, the only thing that’s holding me back is their over-crowded pcb! not sure why OCZ/Toshiba pcb’s look like SAS/Data center drives!

I’m not talking about the size, what worries me is the amount of capacitors/items that populate their drives.

The more items you have.. the more could go wrong.
Other manufacturers have far cleaner/less populated pcbs.

While i see your point, lots of SSDs have design like that and never caused trouble. Those are pretty dumb components and wont die easily. The controller is the main problem with ssds, when it comes to reliability.

You’re right my friend.. It’s just that I’m questioning the purpose of these components and nothing more.

I wonder the same. For all its worth, they could get away with a much smaller PCB and only 2-4 packages aswell (by using 8 dies per package). That would save cost, which could translate to lower MSRP.

Big guys are doing this for a while now (samsung and smi based drives to name a few).

I’m with you in this, a cleaner/smaller pcb would most likley lead to better cost saving.

sounds like you don’t understand PCBs. It doesn’t matter if the components are “visible” or not. In fact there’s going to be more heat if more of the components are inside an IC rather than on the outside. If you really don’t want to see the components, you basically have to remove them all together, e.g. downgrade the card.

Hello Eisa,
That still does not change the fact that all other bigger, more established manufacturers are making far more cleaner pcbs.

Sorry, but this is a really stupid complaint. If they were electrolytic capacitors then at least we could talk about it, because those had limited life-expectancy if they are highly loaded. But these are solid capacitors. You should complain if they do not put enough capacitors into a product. Yes, that is a usual cost reduction method. These are basically noise filtering capacitors. Without them the product is cheaper but less reliable.

PR article at best, does not stand out in any way, I’d still take sammy or crucial mx100 over this any day, bf controller is the best my ass.

I used to frequent this site for reviews, but if you can’t even take a honest critique of the artile (PR stuff otherwise), don’t even bother. And thank for deleting my previous post, looks like it was too much to handle, right?