The OCZ Vector has been the top performing SATA SSD from the company for the past few years. Utilizing their proprietary Indilinx controller and most recently, Toshiba’s A19 NAND, they provided for strong performance for mainstream consumers as well as enthusiasts, but it did have its drawbacks in recent times. Since the release of the latest PCIe NVMe SSDs this year, however, nearly all SATA SSDs are no longer part of the enthusiast segment. When we reviewed the RD400 it was very clear that it took over that battle and left the Vector 180 to fight in the mainstream segment. 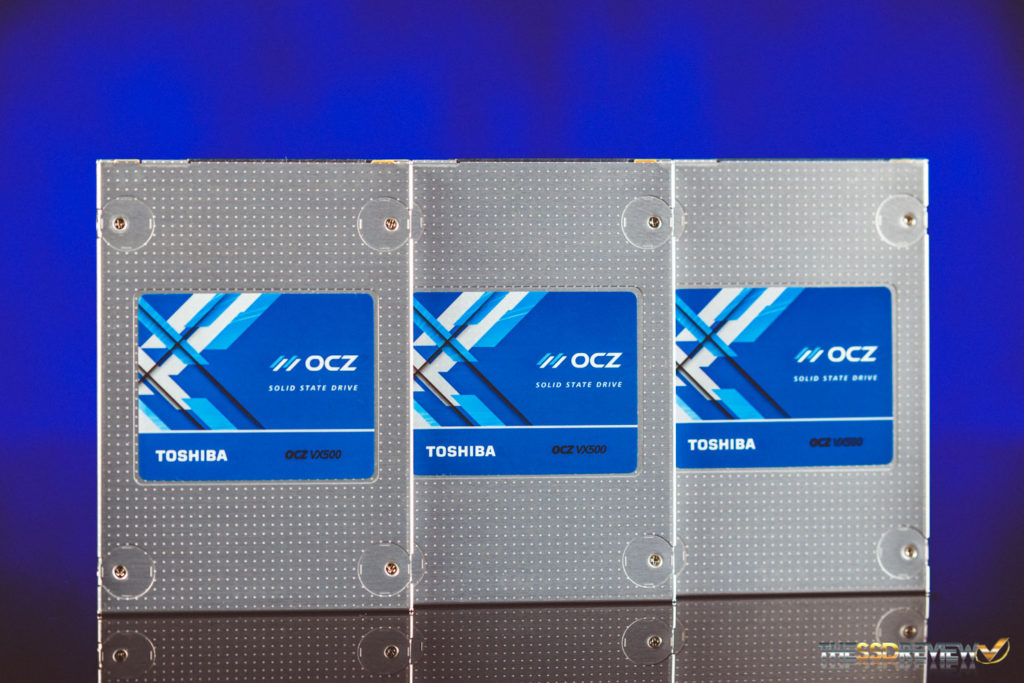 While at FMS this year, we also noticed that OCZ have been tweaking their brand again, refreshing their image since their Toshiba acquisition. The Vector 180 and Trion 150 both had been renamed to VR180 and TR150 respectively and a new aesthetic has been applied to them with a larger presence of the Toshiba logo. Today, we are see the next evolutionary step for the OCZ Vector and it comes in the release of the Toshiba OCZ VX500. The VX500 now contains a new Toshiba controller that has been use in other Toshiba SSDs like the Q300 Pro and, unlike many of the latest SATA releases, it boasts their latest 15nm MLC NAND rather than TLC NAND. Additionally, the OCZ VX500 is now a DRAM-less SSD, well except for the 1TB model which utilizes a small DRAM cache. All this, paired with the same great warranty service and some of the most competitive MRSPs they have released to date, make for the Toshiba OCZ VX500 to be a seemingly great mainstream option for those in search of a new SATA based SSD. Let’s dive into the review to see if this new product is truly as great a value as it seems and if the DRAM-less design will make it or break it.

The OCZ VX500 is a 2.5″ 7mm SATA 6GB/s SSD. It is available in capacities and MSRPs of 128GB ($64), 256GB ($93), 512GB ($153), 1TB ($337). The street prices are subject to change of course and should cause a stir once we see how sales unfold. Sequential read speeds are rated for up to 550MB/s while write speeds are rated for up to 515MB/s. We were told that the VX500 also utilizes an SLC write caching algorithm, but there should not be a drop off in write performance under most circumstances. It is also rated for up to 90K/65K IOPS random read/write. In addition, the VX500 features SMART, NCQ, TRIM, and DevSleep (except for the 1TB model) and high endurance. The endurance is rated from 74TBW for the 128GB model to 592TBW for the 1TB model. It is also covered by a 5-year warranty. This warranty, of course, is their premier Advanced Warranty Program which helps to ease the pain of a typical warranty claim. OCZ can look up the warranty based upon the serial number of your drive and they will send you an advanced replacement new product, not a refurbished unit. They even include a free prepaid return shipping label and ship next day for reduced downtime. 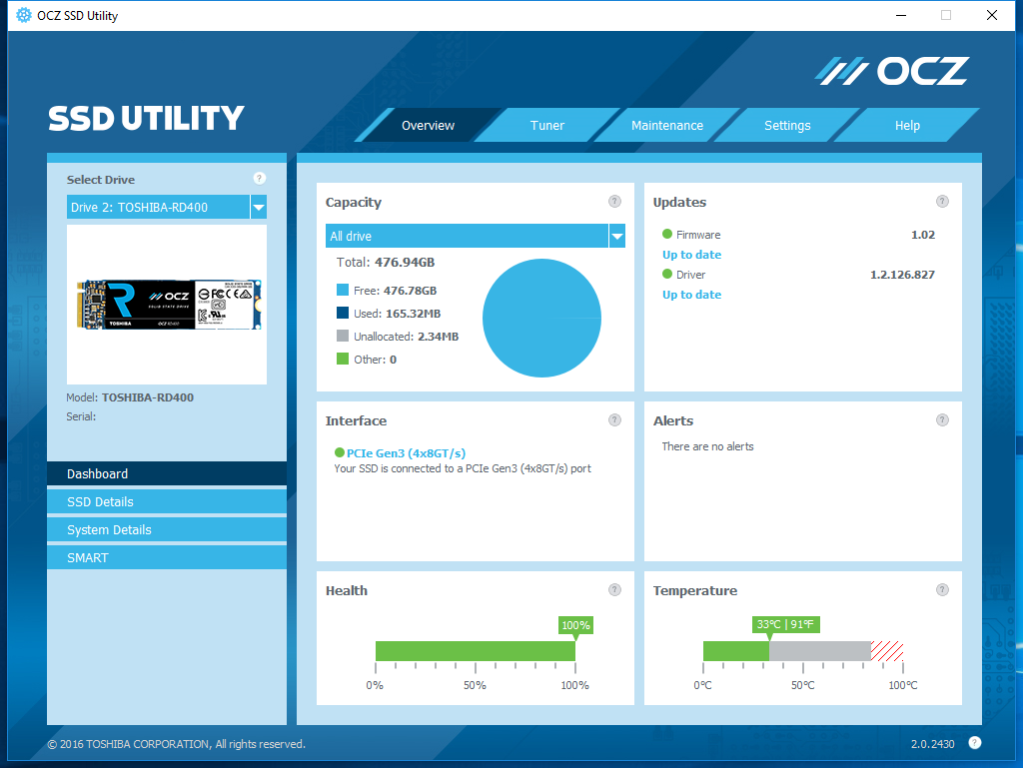 Furthermore, OCZ has their SSD Utility available for download and use with the VX500. It is a feature packed SSD toolbox that allows you to monitor the life the drive, benchmark, update the firmware, secure erase and more. Acronis True Image 2016 cloning software is also bundled in with the SSD so that you can easily transfer your old OS, data, and applications to your new VX500 SSD. 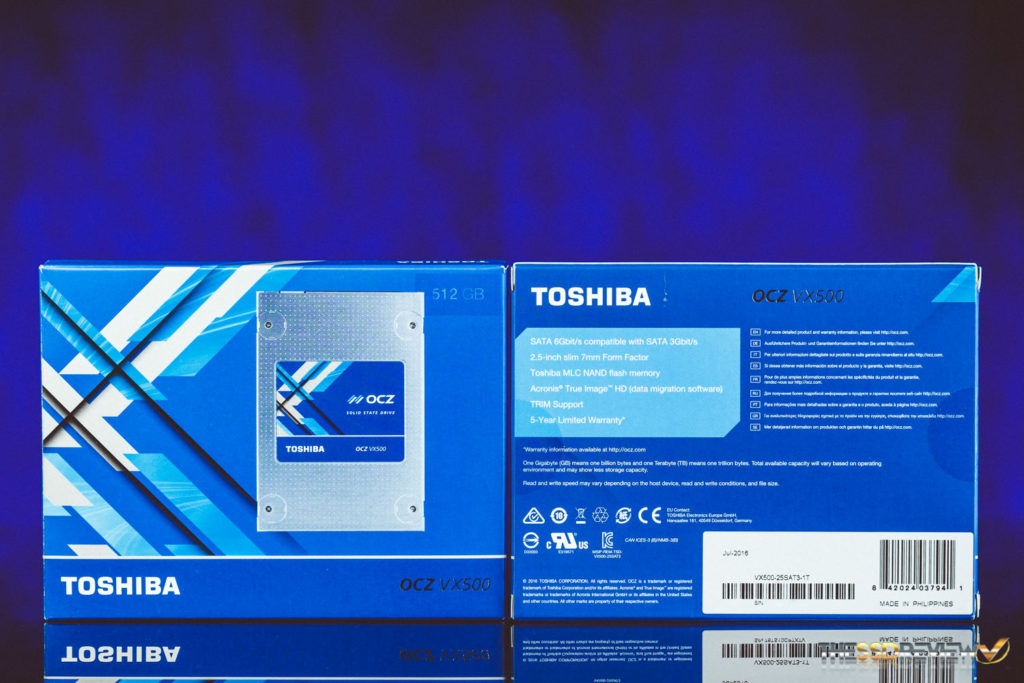 The packaging and graphic design is very similar to that of the Trion 150 we reviewed earlier this year.  The front has the picture of the drive, the capacity clearly listed in the top right and the name of the product on the bottom. The backside of course lists the form factor, included software, and 5-year warranty. 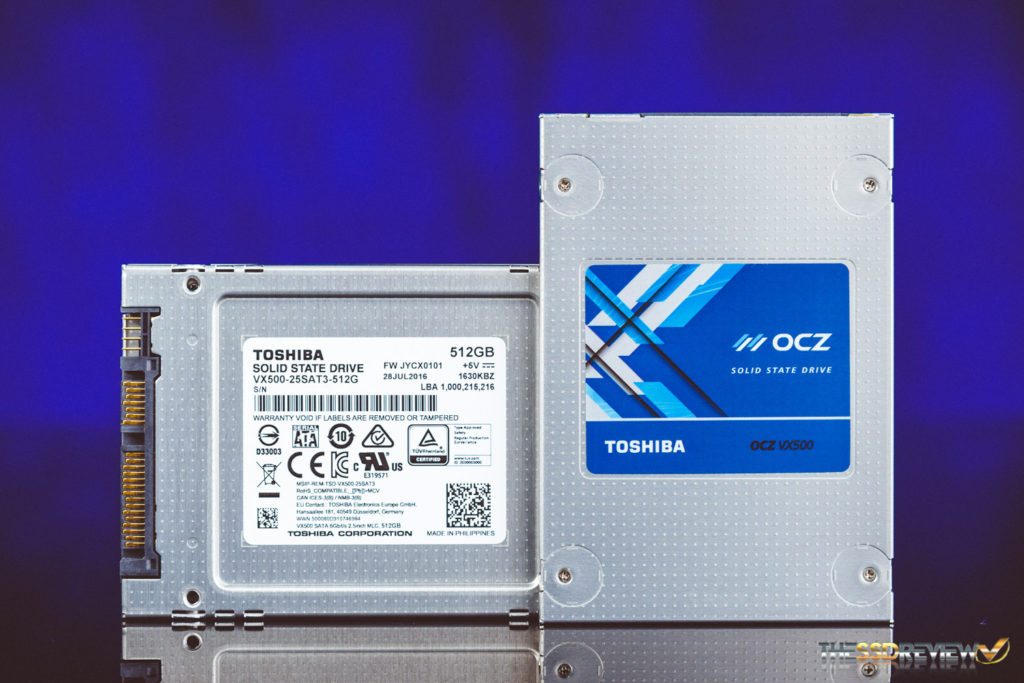 Once taken from the packaging we can see the casing is identical to the Toshiba Q300 Pro. The new casing is a lot more industrial looking and lighter weight than the VR180 it is replacing. 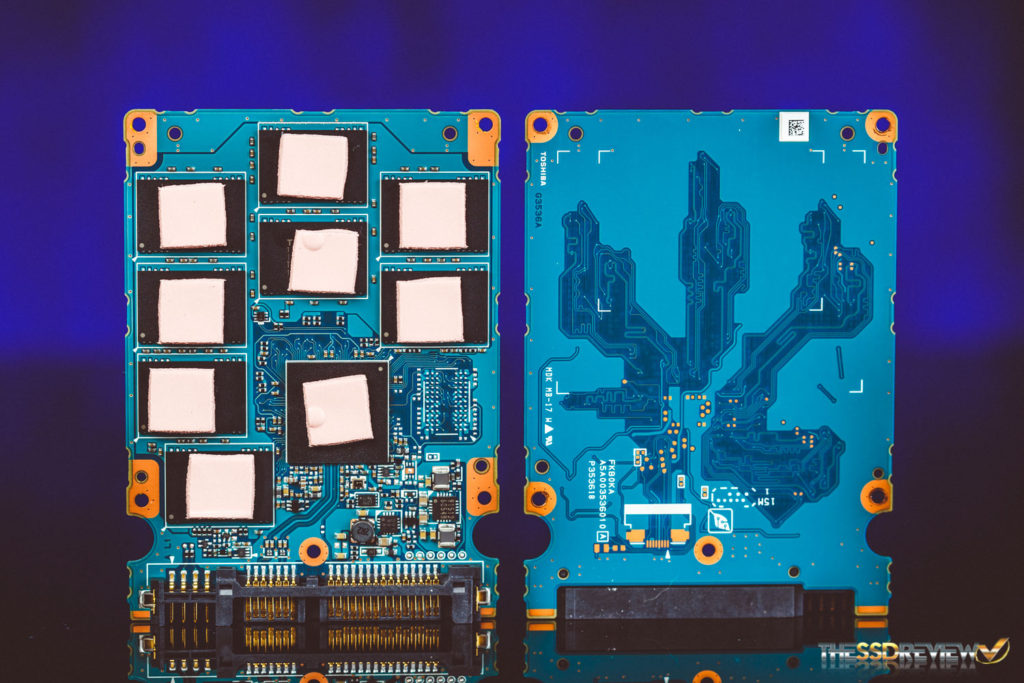 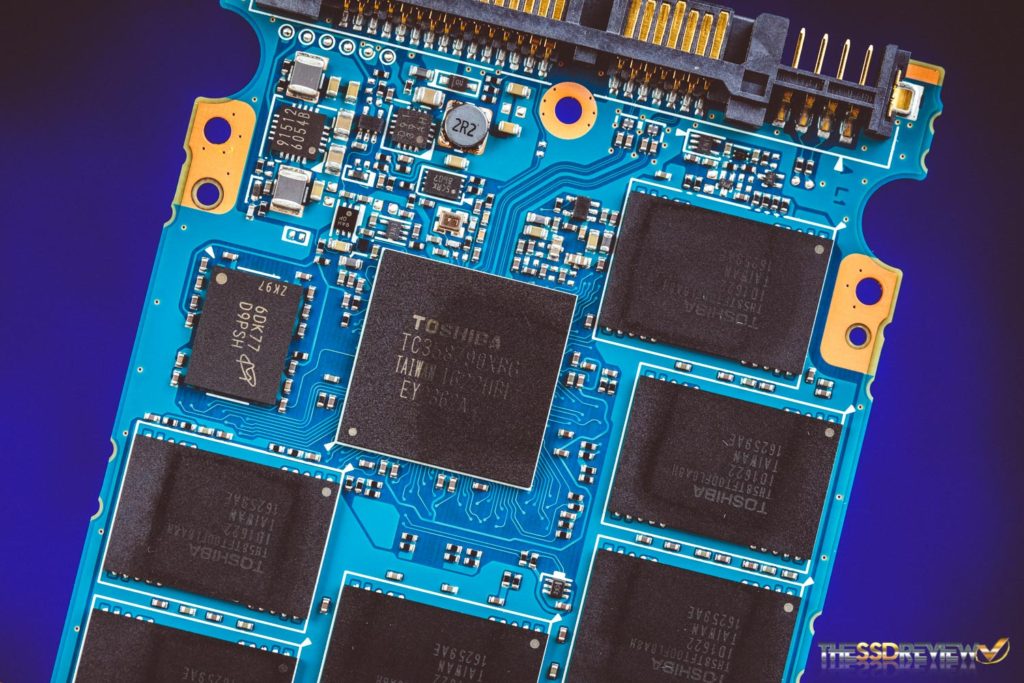 The controller itself is Toshiba’s TC358790. In Toshiba’s other drives it features encryption support and boasts Toshiba’s proprietary QSCB error correction, but neither are listed in the VX500’s marketing material. What we can say, however, is since it has been in operation with some of their other SSDs for a while now, is that it should prove to be very reliable in the VX500. It is stated to enable lower power consumption, which should result in the VX500 being a more efficient product over the VR180 for consumer use as well. Idle power consumption was very high on the VR180 with OCZ’s old Indilinx controller and the VX500’s new controller is here to fix that.

Where is the hd tune pro chart to see what happens after slc runs out?

After running HDTune on all capacities we tested there was no drop off in write performance. All maintained about 490MB/s write across the board.

That sounds like one of the highest read / write averages for a sata3 ssd from start to finish. Am I right? Thank goodness for mlc.

It is up there for sure. We have not tested write performance with many other MLC SSDs in HDTune so I can not say for sure one of the highest, but it sure is good!

Now that’s the way a HD Tune chart should look. Nice! I hope they keep making mlc drives because I cant believe companies are still trying to sell us on write speed does not matter. If we wanted slow write speeds we would stick with hard drives.

I find it highly unlikely, that 256GB model can hit sustained 490MB/s write. MLC is good, but not that good. That would require 64Gbit dies to achieve.

The heading / advertisement should read. This mlc ssd is not just good its great!

I get sick of seeing this nonsense… ‘Once formatted the 256GB model has 238GB of usable space’.

You should know better, it’s simply a difference of GB vs GiB.

The majority of our readers do not know this unfortunately and thus we provided this information as we do.

Actually, the statement is 100% correct. Typical consumers, and in fact, the industry does not advertise or speak of GiB whatsoever in discussing available volume on a SSD. The SSD is a consumer directed SSD and 99.9% of consumers don’t understand GiB whatsoever. They want and deserve to know how much logical space is available to them when the drive is formatted. The freedom to read what we wish is an amazing thing.

I found it funny you got so defensive.

You should be trying at least to educate your readership, rather than just perpetuating myths about lost space through formatting.

You have a strange sense of humour.

While your first comment might be true, you shouldn’t be surprised that Les explained why he writes what/how he does… which is also true.

I dont recall ever stating, or rather Sean writing that space was lost after formatting. He simply stated the available space after the drive was formatted. Should he then have to say that, before formatting, there is no available space for storage? Nobody ever spoke of lost space, but rather, at least I think you sought the opportunity to perpetuate the whole GB/GiB scenario.