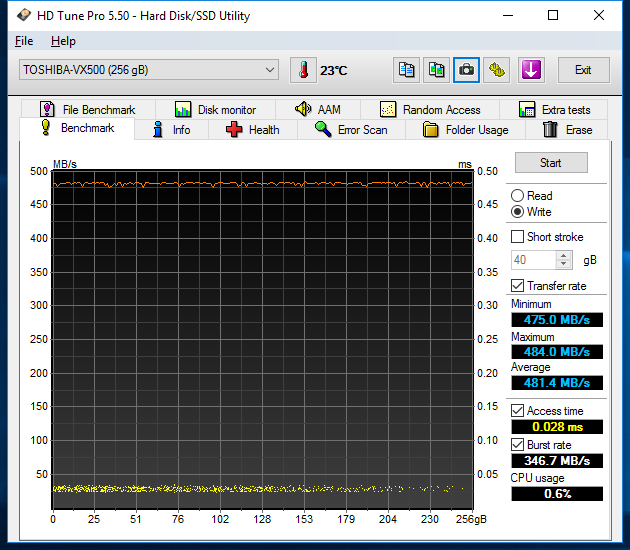 For one last benchmark we are yet again utilizing HDTune. HDTune shows us that the average write speed for the VX500 did not drop off like other SSDs with SLC write caching. The 256GB model averaged 481MB/s while the two larger capcities averaged 490MB/s.

Throughout testing the VX500 gave us some mixed results, though for the most part, they were positive. Sequential speeds easily matched their rated specifications of up to 550MB/s read and 515MB/s write. It reached its up to 90K IOPS read and 65K IOPS ratings. The one thing which was low was its 4K QD1 performance. In looking at the results of these metrics, the VX500 was slower than its predecessor with speeds of around 25MB/s read and 140MB/s write.

These results, however, did not reflect how the VX500 performed in our trace based and real world benchmarks. In these tests the VX500 did rather well. In PCMark Vantage it averaged 78K points across all capacities. In PCMark 8 Extended the VX500 placed among the best MLC based drives in the market in both the steady state and recovery phases. In transferring our 30GB of files over to the VX500 it maintained speeds above the rated write speed and ranked it among average. However, during our look at the efficiency of the SSD we saw that the VX500 turned out to be the most efficient drive we have put through that test yet. It even beat out competitors with more power efficient 3D TLC NAND. To top it off, we saw that the new architecture helped to improve the idle power consumption as well with much better results than that of the VR180.

The DRAM-less architecture did not break the VX500 in today’s review, if anything, it actually pushed it to be the most power efficient SSDs we have tested to date. This is great to hear for those who are in need of a replacement SSD for use in a laptop or other mobile device that can utilizes a 2.5″ 7mm SATA SSD. When looking the VX500’s performance, the 4K QD1 results were lower than we typically would like, but it redeemed itself in our trace based tests and real world transfer testing. Overall, it is a strong performer in the mainstream segment.

In addition to its strong performance, the VX500 comes bundled with a great 5-year warranty, migration software, an SSD toolbox, and has some great endurance figures. Considering all of this, as well as its competitive introductory MSRPs, the Toshiba OCZ VX500 proves to be a very good choice for almost any consumer looking to get a new SATA based SSD. For that very reason we have no problem in giving this SSD our Gold Seal of approval!

Check out the OCZ VX500 at Amazon Today!

The VX500 delivers great mainstream performance, comes bundled with a great 5-year warranty, Acronis True Image 2016 migration software, an awesome SSD toolbox. It also has some great endurance figures and competitive introductory MSRPs to top things off. The Toshiba OCZ VX300 should prove to be a very good buy for almost any consumer looking to get a new and highly efficient SATA based SSD.