More MB/s, more IOPS, and lower latencies are what storage enthusiasts dream of. CPUs, RAM, and GPUs are all pushing faster speeds than ever, but storage has typically been a bottleneck for enthusiasts, even after the introduction of SSDs. To enable faster speeds bus bandwidth has been increased over the years and storage has started to migrate onto the PCIe bus so that it is closer to the CPU. With the latest flash technology, protocols have even had to be rewritten to keep up as well. In the past two years Non-Volatile, Memory Express, or NVMe, has replaced AHCI protocol and is now common speak among storage enthusiasts. Thanks to the launch of the Intel 750, the first consumer NVMe product, more and more people have been demanding NVMe products for their systems. With the ability to deliver multiple GB/s read and write speeds as well as hundreds of thousands of IOPS due to great reductions of latency and overhead, we here at The SSD Review can’t help but think, who wouldn’t want this type of speed? 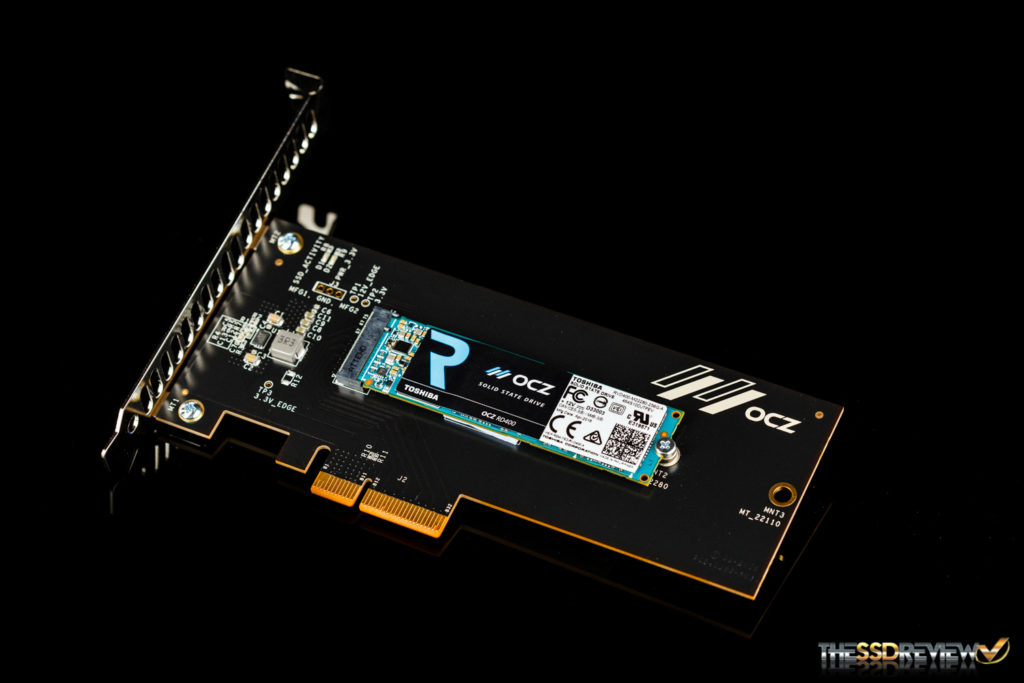 The list of readily available consumer NVMe SSDs is pretty short. First, there is the Intel 750 Series, which comes in two form factors, HHHL add-in card and 2.5″ SFF. In addition to this, Zotac now has a HHHL AIC NVMe SSD out too. These SSDs are great for desktop/workstation platforms, however, there is an opportunity left on the table for other competitors in the market. Samsung with their 950 Pro, and now OCZ with the RD400, have decided to go a different route by producing smaller M.2 form factor NVMe SSDs (though OCZ also offers a HHHL AIC adapter option). These smaller form factors are perfect for those who want to save space in their desktop system by utilizing an M.2 slot, now common on many new motherboards, or use them in the latest laptops that support them. Furthermore, form factor wasn’t the only opportunity left on the table. With a readily available 1TB capacity, the OCZ RD400 couldn’t have come soon enough for enthusiasts and prosumers! With specs that rival the Samsung 950 Pro, a capacity point that nips at the heels of the Intel 750’s largest model, and competitive MSRPs, the OCZ RD400 is out for blood. Read on to learn more about this latest enthusiast class NVMe SSD and see how it competes with the best of the best!

Sequential speeds are rated for up to 2600MB/s read and 1600MB/s write. Random read and write speeds are listed for up to 210K/140K IOPS. Endurance figures are also impressive with the 1TB model having a listed spec that is more than four times greater than that of the Intel 750! Active power consumption is rated for 6-6.4W typical while low power state consumption is rated for 6.0mW typical.

In terms of features, the RD400 supports TRIM and SMART monitoring. The NVMe interface revision is 1.1b compliant. It is compatible with the latest OCZ SSD Utility. With it you can monitor your drive, manually TRIM and secure erase, you can even update your firmware and send support requests to OCZ too! The RD400 is also backed by OCZ’s awesome 5-year Advanced Warranty Program where you get advanced RMA on serial and free return shipping!

The packaging is very appealing with a sharp black and blue theme. On the front side the SSD model and capacity are displayed and as can be seen quite clearly, both Toshiba’s and OCZ’s names are shown.  Also, on both the front and back are images of the drive. The backside states the main specs and what is included in the box. Not pictured is a HHHL PCIe bracket that is also included.

The HHHL adapter card was included in our test samples. It is fully blacked out and has the OCZ logo on it. You can easily unscrew the M.2 drive itself from the adapter at any time without voiding your warranty. Once taken off the adapter card we saw there is also a thermal bad to help dissipate heat from the controller.

Speaking of the controller, the RD400 utilizes the Toshiba’s proprietary NVMe controller, part number TC58NCP070GSB. This is the same controller found on the Toshiba XG3 M.2 NVMe SSD we just reviewed. As a matter of fact, this and the XG3 are physically identical except for the branding sticker!

There are two 128G-bit Toshiba 15nm MLC NAND chips on the 256GB and 512GB capacities, and four on the 1TB capacity. There is also a DRAM buffer on this drive and Toshiba has opted to utilize a Samsung LPDDR3 DRAM package for this task.