We also wanted to see how performance was in a real world use when transferring large files to the SSD. For this test we are going to simply stress write performance by transferring over a 30GB folder of movies off of a 512GB Samsung 950 Pro to the test SSDs and time how long it takes. Once complete we can calculate the average speed. For reference we have included both a 2.5″ and 3.5″ WD Blue HDD. 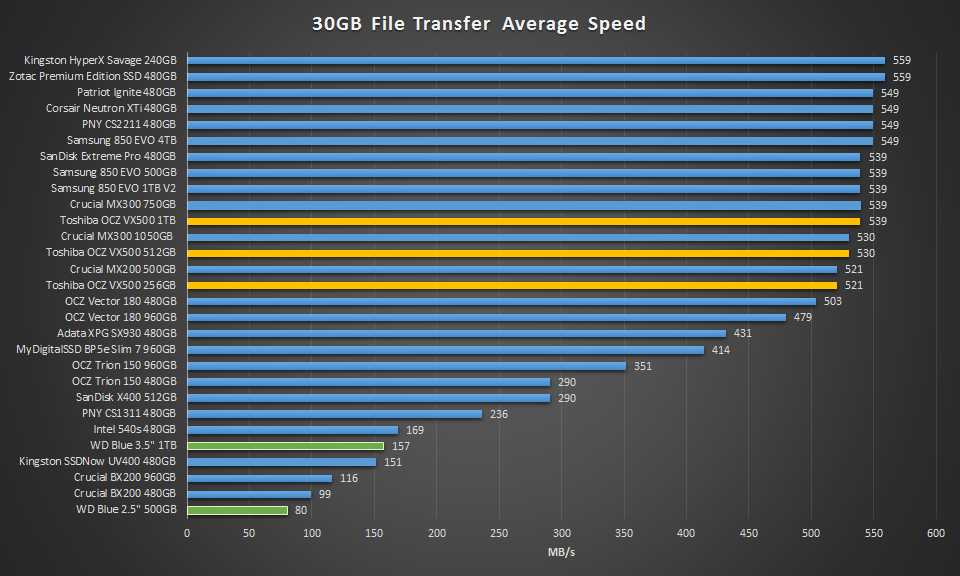 While the above results do not place the VX500 on the top of our leader boards, they are still very respectable. Considering the official specification for write speed is 515MB/s, reaching average speeds of 520-540MB/s is very good. This ranks the VX500 among some of the most popular mainstream options in the market.

For our power consumption testing, we have the drive connected to the system as a secondary drive. To record the wattage, we are now utilizing a Quarch Technology Programmable Power Module. It allows us to accurately measure power consumption over time and is flexible enough to allow us to test any SSD that comes our way.

Our power analysis may change as time goes on, but for now we are looking at just a few metrics with the main goal of measuring our results against the manufacturer’s ratings. Because most consumer systems are at idle for about 80% of the time, idle power consumption is an important measure to look at when understanding the efficiency of a drive.

In the chart above we can see that SSDs are magnitudes more efficient than standard HDDs. Here we see that the VX500 truly does make up for the VR180’s poor power consumption at idle and that OCZ has vastly improved here. the 256GB and 512GB models average lower than 100 milliwatts and the 1TB idles at around 240mW due to the extra DRAM.

Finally, we wanted to post up a graph of the power efficiency of the SSDs in comparison. We are looking at MB/s per Watt in this graph. The higher the result, the better.

Finally, this chart above shows that the VX500 has greatly improved in efficiency, not only at idle, but also during large sequential writes. Most surprisingly, the VX500 is even more power efficient than any other SSDs we have put through this test, including the 3D NAND powered Crucial MX300 and Samsung 850 EVO! So, while it wasn’t able to top the sequential write leader board before, for this test, the VX500 reigns supreme.