This time around in PCMark Vantage the Intel 750 series achieved a Total Score of 138,295 points, while impressive, it isn’t as impressive as the 330K the 1.2TB model achieved. The highest transfer speed of 1,628MB/s was during the “Windows Vista startup” test, which is quite ironic as you will see later in this review. The lowest value of 345MB/s was recorded in the “video editing using Windows Movie Maker” test. 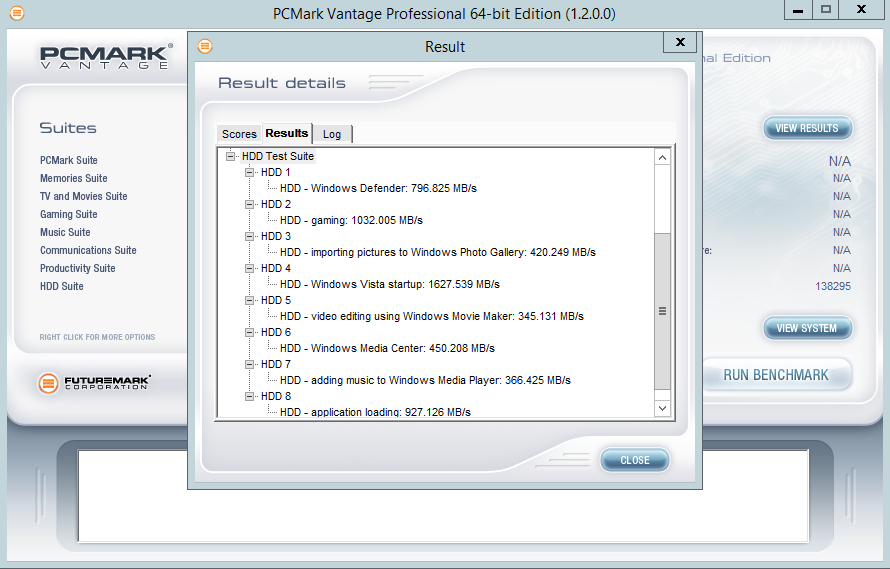 For our last benchmark, we have decided to use PCMark 8 Extended Storage Workload in order to determine steady state throughput of the SSD.  This software is the longest in our battery of tests and takes just under 18 hours per SSD.  As this is a specialized component of PCMark 8 Professional, its final result is void of any colorful graphs or charts typical of the normal online results and deciphering the resulting excel file into an easily understood result takes several more hours.

There are 18 phases of testing throughout the entire run, 8 runs of the Degradation Phase, 5 runs of the Steady State Phase and 5 runs of the Recovery Phase.  In each phase, several performance tests are run of 10 different software programs; Adobe After Effects, Illustrator, InDesign, Photoshop Heavy and Photoshop Light, Microsoft Excel, PowerPoint and Word, as well as Battlefield 3 and World of Warcraft to cover the gaming element.

As you can see, performance is recorded in terms of Bandwidth and Latency. Bandwidth (or throughput) represents the total throughput the drive is able to sustain during the tests during each phase. Latency, at least for the purposes of PCMark 8, takes on a different outlook and for this, we will term it ‘Total Storage Latency’.  Typically, latency has been addressed as the time it takes for a command to be executed, or rather, the time from when the last command completed to the time that the next command started.  This is shown below as ‘Average Latency’.

PCMark 8 provides a slightly different measurement, however, that we are terming as ‘Total Storage Latency’.  This is represented as being the period from the time the last command was completed, until the time it took to complete the next task; the difference of course being that the execution of that task is included in ‘Total Storage Latency’.  For both latency graphs, the same still exists where the lower the latency, the faster the responsiveness of the system will be.  While both latency charts look very similar, the scale puts into perspective how just a few milliseconds can increase the length of time to complete multiple workloads.

These PCMark 8 scores were quite unexpected based on the previous benchmarks, especially after seeing the PCMark Vantage results. The 400GB Intel 750 is the fastest SSD in this benchmark. It delivers very consistency performance throughout both the heavy workload and light workload phases. During the heavy workload phase the Samsung NVMe SM951 gives it a run for its money, but it pulled away near the end. During the recovery phase 3-5 it achieved a throughput of 532MB/s and average latency remained low at just 0.02ms, about half that of the 1.2TB model and other competitors.