Power and Heat are two of the major considerations for datacenters that are often misunderstood buy those not in the industry. We were lucky enough to attend a very eye-opening speech given by Dr. Dileep Bhandarkar, Chief Architect, Global Foundation Services, Microsoft, during the LSI Sponsored AIS 2011 event.

The Chief Architect of all of Microsofts worldwide datacenters, some of which the location and specifications are not even released to the public (they disclose more than 10, but less than 100 data centers worldwide), gave us some critical insight into the operation of today’s, and yesterdays, data centers. We will be using some of the slides from his presentation which can be found HERE. The sessions abstracts from all presentations at LSI AIS 2011 are contained HERE as well.

With the typical datacenter encompassing sizes of up to 11 football fields, these are massive behemoths. The products that we will be testing and evaluating will be deployed in the hundreds, if not thousands and tens of thousands in the future in these very datacenters. This makes the impact that these devices have on their surrounding environment very important. 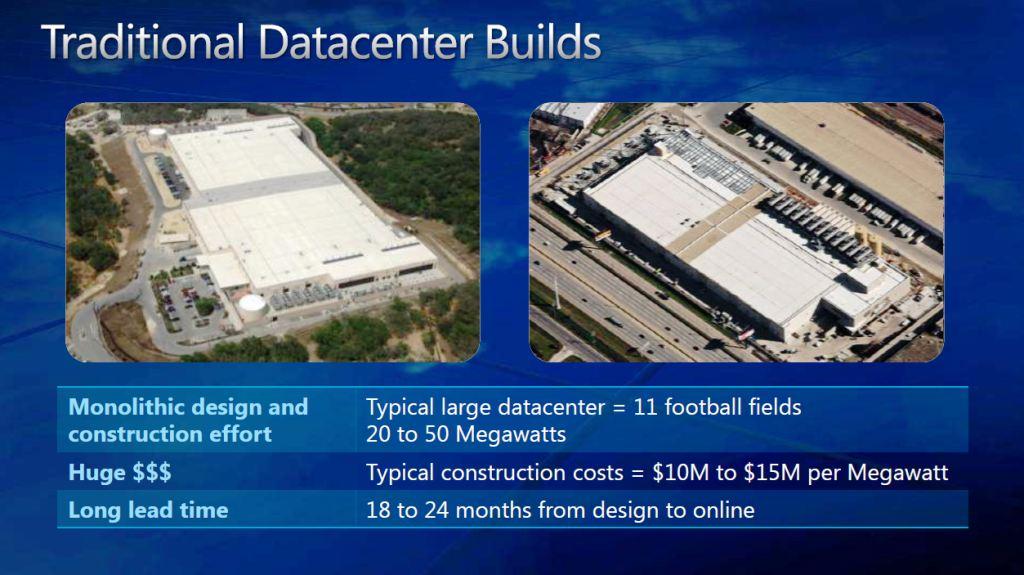 As you can see above, the cost of constructing a data center is actually measured in Megawatts, not square footage. With the price coming in at $10-15 Million per Megawatt, there is intense pressure to minimize the amount of power consumed.

SSS does bring with it massive gains in performance, and the ability to gain more in less space. The performance gains mean less deployed devices, which results in less floorspace required. But floorspace isn’t the key measurement that is relevant.

From this slide we can see that the power consumption of the datacenter is a key measurement that is not to be taken lightly, outpacing all other considerations by huge margins. To understand the reason that power is so important one has to realize the nature of the datacenter.

Datacenters are designed to be 100% available, 100% of the time. Not only does power need to be purchased from suppliers, but for every watt of power that is consumed, there must be an additional redundancy of that power.

Humongous banks of batteries are required as a monolithic version of a UPS (uninterruptable power supply). These provide backup during power loss, and massive generators are also used in tandem with these to power the data center for extended amounts of time in emergencies. When we are speaking of generator rooms, we are speaking of a scale that can power most small cities! This alone brings in a considerable amount of needed infrastructure and massive engineering efforts.

After construction, the cost of power does not go away. This is a key cost of continued usage that will never go away. Regardless of the design or efficiency, the power requirements and massive cost are going to be a never ending annual expenditure, measured in the millions.