There seems to be no doubt in anyone’s mind that 2012 is going to be the year of the ultrabook and CES 2012 Las Vegas was front and center with just about every ultrabook available, or soon to be, this past week.

Today’s report will examine three forerunners that appear to be in a position, above all others at this point anyway, to grab top marks in 2012. These amazing Ultrabooks are the Toshiba Z Series, Samsung Series 9 and the LG Z330, although the 15″ S9 just may merit discussion as well.

Those who know me may also feel this to be an unfair comparison as I have had the Toshiba Z830 as my tool of choice for a few months now. In fact, I started writing the article on the Toshiba Z830 while awaiting my flight arrival from Las Vegas to Buffalo and am now typing away on the plane (while my beautiful Associate Editor munches away on caramel corn beside me as a matter of fact).  This may not seem like much but it was only a few months back that I cursed the Samsung Series 9 while traveling from Toronto to Taipei and was unable to pick up any wireless signal whatsoever in Toronto, Hong Kong or Taipei Int’l airports.  From that point on, it felt like a kick in the teeth each and every time someone commented on what a great system the Series 9 appeared to be.

Toshiba Z830 and Z835 Ultrabooks are identical in exterior composition and the numbering and naming conventions may be different depending on configuration, country of sale and even the outlet in which it is sold in as seen with Best Buy systems. 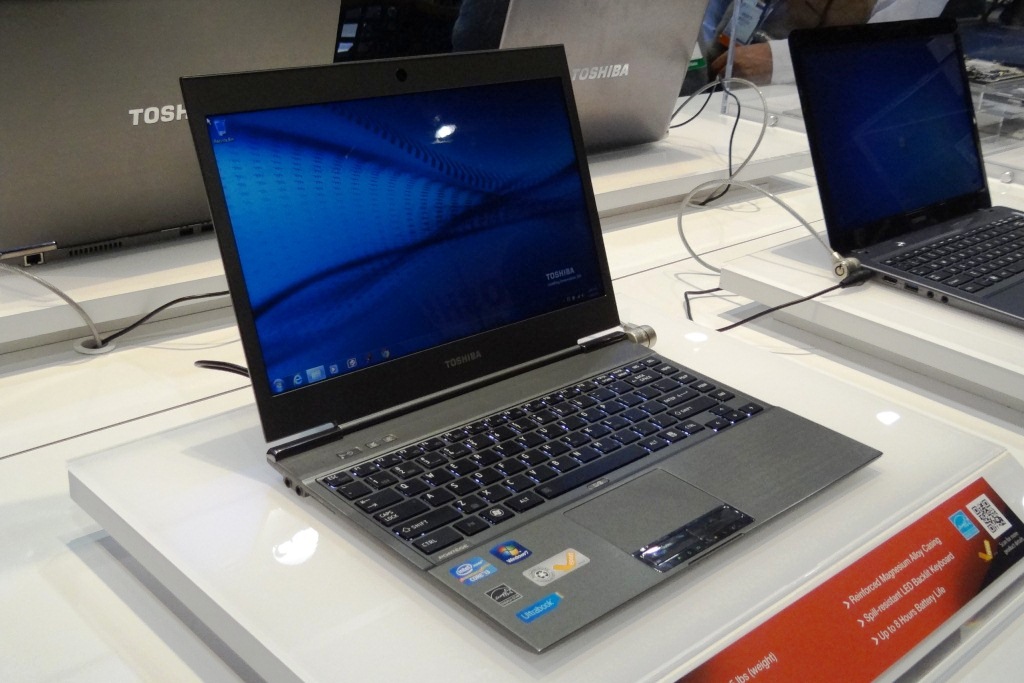 We did a thorough review a short time ago and the Z Series is available with an Intel Core i3, i5 or i7 processor and up to 6GB ram (two of which is integrated).  The Toshiba 128GB SSD is standard and sufficient for typical use, however, we elected to swap it with our Runcore T50 SATA 3 120GB SSD and performance results of lightning fast SATA 3 speeds were the result.  In considering ones purchase, its important to note that even an expert cannot visibly see a difference between the best and worst SSD in typical use. This is the result of significantly lower access times which are almost exact in solid state drives yet somewhere in the area of 90 times slower in the hard drive.

The Toshiba Z Series (up until CES) was the lightest and thinnest ultrabook available by a margin at 2.47 lbs and 0.63″ thick. Although we have been able to push it up to SATA 3 speeds, this has yet to be seen in other reviews and, in speaking with Toshiba, they are just as curious how we did this but assured us that we will, most likely, see system updates to SATA 3 in 2012.

The thing that is strikingly convenient in the Z-Series are the rear ports which, in other larger notebooks, most users have grown to dislike as they definitely affect unit versatility when trying to position or move it around.  The simple fact is, however, that other ultrabooks have had to eliminate much of what we see in these pictures simply as a result of the thin nature of the form factor.

Pricing on the Z Series has been great and this was initially seen when the unit was introduced at Best Buy for a mere $699.  The only concerns that have, as of yet, been identified are the sharp edge of the rear Ethernet port (our review refers) and some are irritated by fan noise which I, to this day, don’t experience.

Overall, the Toshiba has easily been the top ultrabook available leading up to CES (unless you are a Mac lover) because it is thin, light, has a fast SSD, well priced and untouchable with respect to its available ports.  As for myself, this is the only system I could comfortably fit inside my padfolio, thus eliminating any need for a laptop case which brings in big marks in my book.