It is almost four years to the day that the first consumer solid state drive was making its appearance which makes todays EXCLUSIVE SATA 3 mSATA SSD review truly sweet.

Runcore is timing this ‘world first’ release with the news that they are also opening shop in California to better serve North American enterprise and client needs. The Runcore T50 mSATA SSD is ‘SandForce Driven’ with the SF-2281 processor and capable of equal 500MB/s speeds and, incredibly, ways the same as a 25 cent piece.

In 1969, The Ford Motor Company blew the socks off of motor enthusiasts with their limited edition ‘Boss 429’ Ford Mustang.  The Boss 429 was introduced at stock 375 hp but one could increase that another 100hp with very little work.  It did the quarter mile in 14 seconds smoking passed any competitor with an impressive 0-60 in just under 7 seconds. 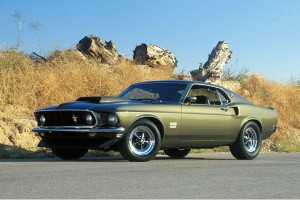 It was small,  it had a monster engine and it speeds were unparalleled for anything anywhere close to its size. The Boss 429 was truly a full on racing engine in a consumer design and Ford had to revamp the Mustangs look as the engine was just too big to fit.  In racing circuits, the Boss 429 quickly became known as the ‘shotgun engine’ the exhaust ports were so large, standing behind the car when she was running was ill advised. Can you see where we are going here?

As much as we believe that mSATA drives are going to be all the rage in laptops within the next few years, their use is presently limited to the Lenovo E, Y, X and T series, Dell Precision as well as the Samsung Series 9 laptop which we reviewed here.  In fact, we conducted a separate review of that laptops PM800 3Gb/s mSATA SSD here which was top dog at the time but soon relinquished its reign to the Renice X3 120GB SSD that we reviewed here .  The X3 is about to hand the belt over which is a given as the Runcore T50 is the worlds first SATA 3 mSATA SSD and stands up to the best SSDs on the market, let alone all other mSATA counterparts.  If you are into checking out all of our mSATA reviews, the first mSATA release was none other than the Intel 310 mSATA SSD that we reviewed here to round things off.

The T50 is shipped in a well designed and compact cardboard package that clearly identifies its size, qualities and the fact that it is a ‘SandForce Driven’ SSD.  The T50 mSATA SSD and a transposer are found inside which allows the SSD to be retrofitted in a SATA interface rather than that of mSATA; this being  the mPCIe design with a small wiring switch.

All other information is found on the disk itself which includes a free copy of Acronis True Image and instructions on proper hard drive to SSD migration, Adobe Reader along with warranty, product information and a Q&A section for those commonly asked questions.

To give you an idea just how small a mSATA SSD really is, here are two pictures comparing it to the Kingston HyperX 240GB SSD.  Looking at this, one has to wonder why we haven’t yet seen a terabyte capacity SSD released yet but for its obvious cost factor.  A quick click will enlarge all pictures.

JOIN THE DISCUSSION ON OUR SSD FORUMS!