Our report today is going to take a close look at the newly released Toshiba Portege 13.3″ Ultrabook, one of the smallest and lightest SSD contained laptop solutions to be released this year.

We had previously reviewed the Samsung Series 9 Ultrabook in our search for the ultimate website laptop, however as stunning as the Series 9 was, it had an Achilles heel by way of a very weak wifi signal and we haven’t received any notice of repair to date.

Our search for the ultimate laptop first became evident at CES Las Vegas this past January as I was met with the sneers and chuckles from the packs of Mac lovers in the CES Press Lounge.  It seemed that someone forgot to tell me that Macs were mandatory at this predominantly PC event.  In any case, I made it through and swore that I would have the best PC available for my needs next year and so enters the Toshiba Z830.

The Toshiba Z830 series laptop is a 13.3 form factor and its exterior shell is of dark silver aluminum construction with a smooth brushed finish. Our website system contains an Intel i7-2667m processor, 6GB of Toshiba RAM and a Toshiba 128GB solid state drive. I mention it as our ‘website system’ simply because this is not a manufacturer sample which must be returned.  It is our choice in purchase after a very thorough examination of ‘new gen’ ultrabook releases in order to find the ideal system for our travelling needs.  If you happen to bump into me at any of the Technology events in 2012, chances are that the Z830 will be hidden in the portfolio on my side.  It is just that compact. 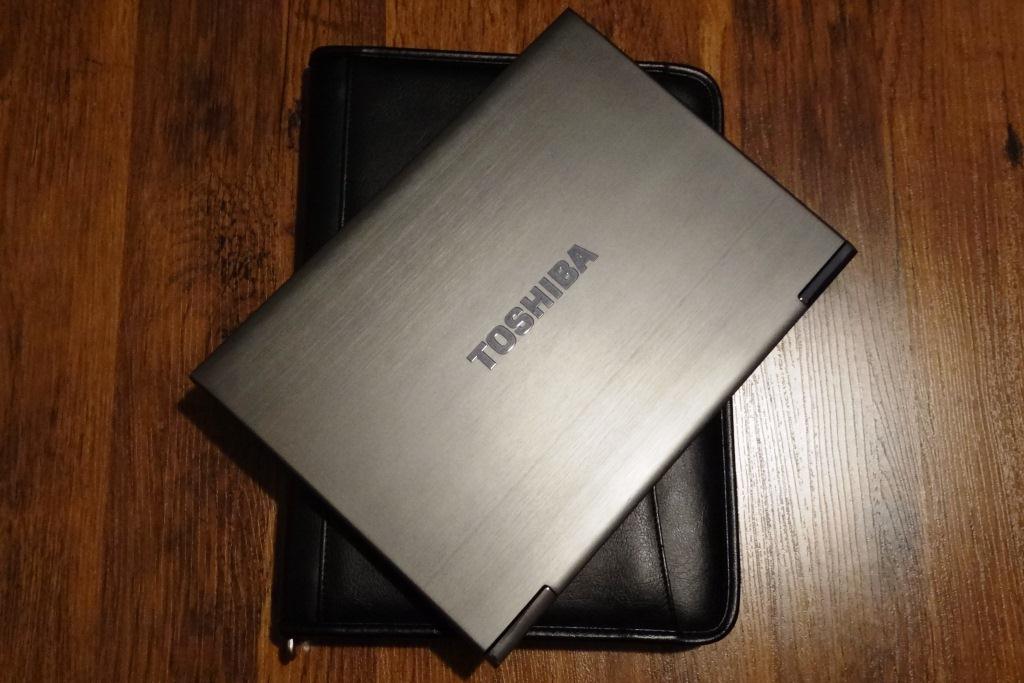 This Toshiba ultraportable is available as the Portege Z830 or Satellite Z830 in Canada with the Satellite being the Portege Z835 in the USA.  The Satellite Z830/Portege Z835 is the most value conscious version and contains an Intel i3-2367m processor, 4GB of memory, a 128GB Toshiba SSD, has a Trubrite TFT glossy display, Windows 7 Premium, and can be found for as little as $899. The Z830 has several options to include an Intel i5-2557m or Intel  i7-2667m processor, 4 or 6GB RAM, a 128GB Toshiba SSD, Windows 7 Professional and  only the Portege business line contains a matte screen display.  The Z830 configurations are considered business versions and are available at Toshiba from $1199 to $1499.

Unlike the rest of the new Ultrabook crowd, the Toshiba Z Series seems to have avoided that wedge shaped design and we feel that they are the better for it.  It weights in at 2.47 lbs and is .33″ thick without and .63″ thick with its rubber feet.  In checking other ultras, the Z830 is not only the smallest and lightest of the pack, but also, has a weight 1/2 lb lighter than the competition in a few cases.

The Z Series contains Intel mobile HD graphics and the maximum screen resolution is 1366 x 768 which we would have liked to see bumped up one more notch.  It is LED backlit, has a 16:9 aspect ratio, native support for 720p content, and is plenty bright.  Specs don’t list the technical numbers but when exploring the system and discovering that its brightness is only at 40%, get yourself some sunglasses before pushing it full tilt.

Backlit keyboards seem to be a rarity with first gen Ultrabooks and we were happy to see a keyboard that is not only backlit, but also, spill proof.  The Z Series keyboard is constructed of raised silent tiling and if I could change anything at all,  it would be a quick trade off to the standard US version from the bilingual Canadian layout.

The trackpad is large, contains two buttons at its base with a fingerprint reader in between them.  Did we mention that the Z Series has both Facial Recognition software and a fingerprint reader for security?  Notification lights such as plug, power, battery, hard disk activity, wifi and Bluetooth are found just under the buttons as the below picture depicts.