It has been a few years now, but thinking back I am sure there are those that remember the hard drive and all that went along with it.  Slow start times, heat, noise and an all around much slower PC experience, especially for those that work in media.  The largest jump we have seen in storage is without a doubt moving from HDD to SSDs.  Specific to SSDs, we have moved from SATA speeds at 540MB/s to PCIe and then to a new NVMe protocol but PCIe still plays a major role in speed. Throughout the years we have seen data transfer speeds progress as PCIe progressed.  PCIe 3.0 today is limited to transfer speeds of 3.5GB/s…tops.  Our report today will change that with the introduction of the Corsair MP600 MPCIe 4.0 (Gen 4) NVMe SSD. 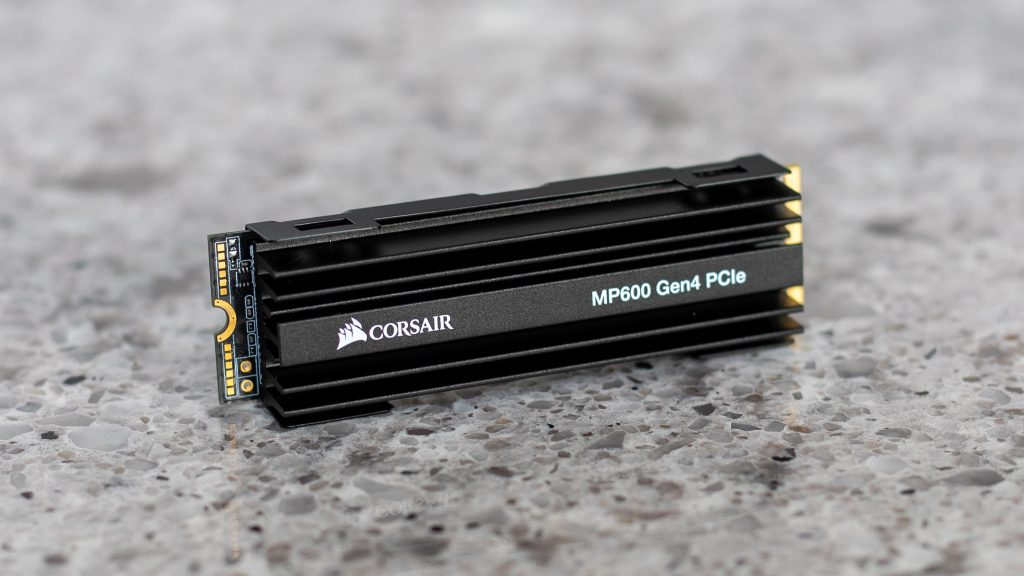 The Corsair MP600 is the first SSD in the industry to use PCIe 4.0.  A heads up though… Such speed comes with a price which starts with an upgrade of equipment.  For instance, our testing today is accomplished only through our newest AMD X570 Test Bench which uses the ASRock X570 Creator PCIe 4.0 motherboard and AMD Ryzen 3700x CPU.  You are not simply throwing this SSD into any system getting performance of 5GB/s. The system must be PCIe 4.0 compliant.

In opening the package, you will find the SSD already situated in an aluminum heatsink which can be disassembled as shown here.  Such a heatsink is necessary to dissipate the heat created through such high transfer speeds and, at least for the ASRock X570 Creator motherboard, there are two Hyper M.2 Gen 4 slots, both of which have similar cooling solutions integrated into the board and one with a fan for active cooling.

The ONLY company right now that has an available Gen 4 controller is Phison with its PSE5016-E16 controller shown here.  The M.2 is a 2280 form factor and contains four pieces of Toshiba BiCS 4 TLC NAND flash memory (two on each side of the SSD), along with a SKHynix DDR4 DRAM cache module.

Pricing of the MP600 is unexpected as one can pick up the 1TB sample we are reviewing today at Amazon for S189 and the 2TB for $372.  These are decent prices but remember, that is not including the upgrade of your PC system to accommodate this SSD.