When we think of solid state drives today, two things comes to mind: how fast can it go and how much is going to cost me. Typically these two go hand in hand, the more speed you want the more it’s going to cost you. But what happens when you don’t want to fork out the big bucks for a quick drive? Welcome to ECO drives by MyDigitalSSD, where not only are you getting decent data transfer speeds, but at a very fair price and a super small form factor. 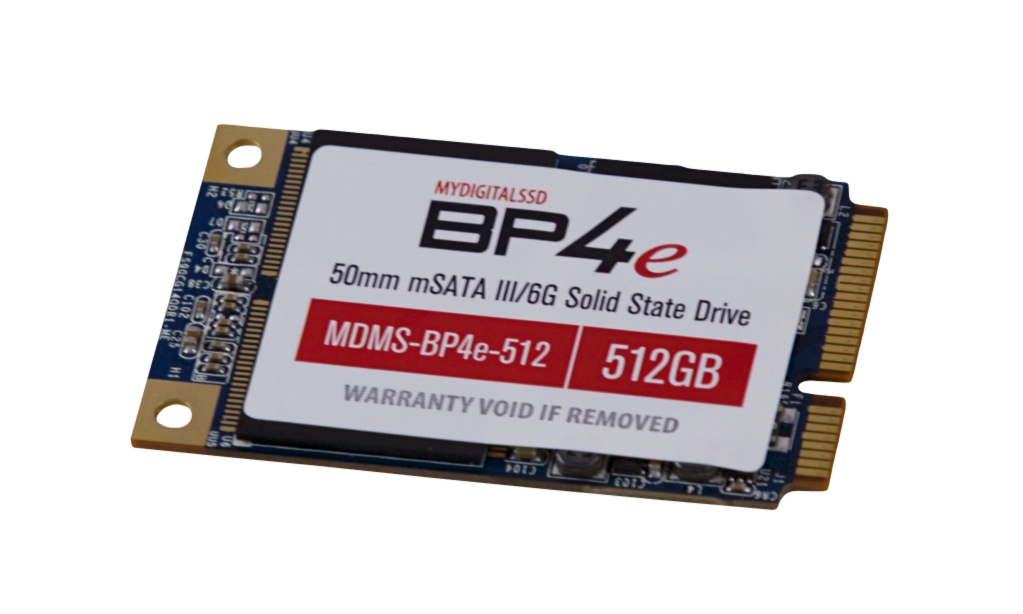 The MyDigitalSSD Bullet Proof 4 Eco is an excellent option for an upgrade to any Chromebook, Notebook, and NUC Mini PCs. Today we are taking a look at the 512GB capacity mSATA MyDigital BP4e solid state drive as a stand alone drive, but also in MyDigitalSSD’s BP4 USB 3.0 mSATA SSD enclosure. Let’s dig in!

WHAT IS A SOLID STATE DRIVE?

If you have never heard of a solid state drive before, or an SSD, then you may be in for shock as to how much time you have wasted waiting on your computer’s hard drive. To briefly explain, a solid state drive is a storage device that is found within your computer and will hold all of your data, including your operating system, pictures, videos and documents. The largest difference between your hard drive and a SSD is the fact that SSD’s increase your system’s speed immensely, never mind that they also come with a bunch of other features that make them far superior to that of a hard drive. If you are interested in learning more, then we encourage you to take a look at our ‘Learning To Run With Flash’ series.

The Bullet Proof 4 Eco is available in 128, 256 and 512GB capacities and feature MyDigitalSSD’s limited two year warranty. Our 512GB capacity has been listed to reach read speeds 550 MB/s and write speeds of 530 MB/s, however on their website they showcase testing of the drive in compressible and random environments. From here we can see that we are actually expecting to set our sights a little lower.

A quick check of Amazon

The packaging for the BP4e mSATA SSD is plain and simple, a little white box that has a lot to hide inside. This was the case for our testing sample anyway. The Bullet Proof 4 mSATA enclosure is clean, crisp and to the point. It’s evident that we are expecting to see SATA 3 speeds from the enclosed mSATA SSD. This would be a great option for when you need to build a new system and want to migrate your OS.

Just like the exterior of the packaging, there are no surprises; the BP4e mSATA SSD is one of the only SSDs  we have encountered that even includes its own screwdriver.

Inside the BP4 mSATA SSD enclosure casing you find the enclosure, another screwdriver, along with mounting screws. We joke about the screwdriver, but this is actually a great idea as it just makes life easier for the consumer who doesn’t have that small of a screwdriver, but also for us who may not have a screwdriver within reach.

The BP4e mSATA SSD features the Phison PS3108-S8 SATA 3 controller, which is reported to reach 550 MB/s throughput based on ONFI/Toggle based NAND, as well as using significantly less power then that of a hard drive. In the picture below we can also the Nanya 1407 DRAM module.

The NAND memory modules are reported to be that of Micron’s MLC synchronous NAND, however, internet searches were unable to uncover any matching FBGA or Part Numbers that would signify that these belong to Micron. It is common to see manufacturer branded memory s such. The mSATA PCB contains four memory modules, with two found on either side of the PCB. With a total capacity of 512 GB, that puts each module at 128GB.