The days when an SSD company could take a basic ASIC design and couple it with MLC are long gone. To be competitive in the current enterprise SSD market, your company must innovate. Over the past few months, we have observed innovation happening on two fronts: ASIC design and NAND technology. Each area presents highly complex problems, which in some cases, have been relatively ignored.

Certain companies are well positioned to solve these problems. Companies that produce their own NAND and ASICs have a high level of understanding of how all the pieces of an SSD integrate into a single product. They are able to push the boundaries of how the NAND and ASICs interact and squeeze every bit of performance out of the individual components.

Micron happens to be one of these companies and Micron P400m is a shining example of what can be accomplished. 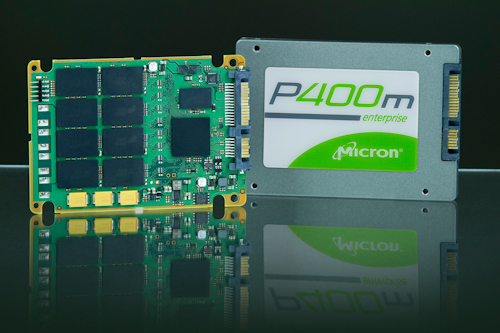 While Micron has always been a major player in the enterprise SSD market, their product lineup was begging to stagnate. The RealSSD P300 is an SLC-based drive that is trying to compete in a market that is quickly converting to enterprise MLC. The RealSSD P400e is a low cost, entry level product that doesn’t fit many enterprise use cases. Enter the Micron P400m, which is a direct replacement for the RealSSD P300. That puts it above the low-cost RealSSD P400e and below the PCIe-based RealSSD P320h in Micron’s lineup. The 2.5″, 7mm P400m ships in capacities of 100, 200 and 400GB.

As you can see from the specifications sheet, the P400m should deliver very solid, but not quite class leading performance. The Intel SSD DC S3700 is a very close match to the P400m. They actually share a lot of the same features, but in the end, the Intel offering matches or beats the P400m in most categories.

This is normally the point in the review where we crack open the case, count the number of NAND packages and take a picture or two. Typically, surprises are few and far between (typically). The P400m had a little surprise up its sleeve. Normally it is pretty easy to decode the capacity of MLC NAND, but Micron is using NAND unique to the P400m. Instead of the normal 32 or 64Gbit per die, we found NAND with a capacity of 42Gbit per die. With 4 die per package and 16 packages, our 200GB sample had 336GiB of NAND. That comes out to nearly 70% over-provisioning. If that sounds like a lot, it’s because it is. Take a look at our Intel SSD DC S3700 review, the 200GB version had roughly 32% over-provisioning, less than half of the P400m.

What does all that extra NAND buy you? Endurance. The P400m’s stated write endurance is 3.5PB for the 200GB model and scales accordingly for other capacities. To look at it another way, Micron rates all capacities at 10 full drive writes per day, for 5 years. These specifications are derived from heavy 4KB random workloads, most users should expect to see much longer endurance. This falls right in line with Intel’s HET-MLC offerings.

Micron went with the venerable Marvell 88S9187 for the controller. Multiple companies, including Plextor, have used this controller with much success. Even though this is the only non-Micron silicon in the P400m, Micron designed the firmware specifically for the P400m.

Adjacent to the controller is 256MB of DDR3 DRAM (2SD22-D9LGQ), which is also sourced by Micron.

Like many enterprise SSDs, Micron includes capacitors to keep the drive powered on long enough to commit all buffers to NAND in the event of power loss.