You may not see this for long (and its definitely not common) but you get a freebee simply for reading!  Over the last little while, we have been assisting with beta testing new benchmark software called Anvil Storage Utilities which is an absolutely amazing SSD benchmarking utility.  Not only does it have a preset SSD benchmark, but also, it has included such things as endurance testing and threaded I/O read, write and mixed tests, all of which are very simple to understand and utilize in our benchmark testing. 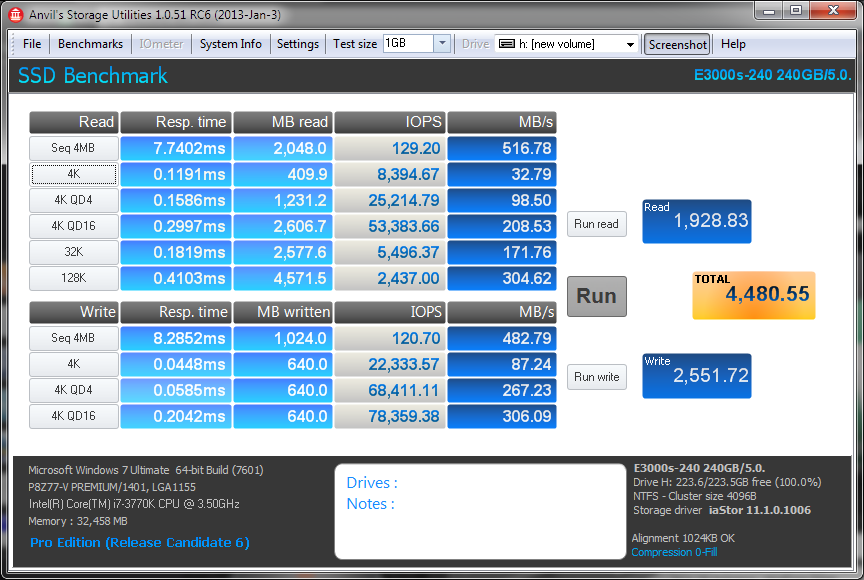 Scoring of the KingSpec E3000s SSD is excellent.  As we predicted, compressible data testing displayed typical LSI SandForce 4k write IOPS results in and around the 80,000 mark.

The KingSpec Challenger Series E3000s SATA 3 SSD provided some of the best results we have seen in a while on PCMark Vantage.  With a Total Score of 70217, a high transfer speed of 428MB/s while testing in Windows Media Center, and 7 of 8 tests technically displaying SATA 3 transfer speed results, there aren’t many SSDs out there that will better these results.

It also merits noting that this is only the second SSD that contains eMLC memory to date and, in fact, this SSD is practically the twin to the PNY Prevail Elite who also made the grade with just a bit higher score.