We will be evaluating the Intel 910 as both a 800GB and 400GB product as both capacities are available for purchase. First we will test the 800GB version with the Maximum Performance Mode. The SSD presents itself to the Operating System as 4 separate 200 GB volumes. There are a few choices for different software files systems and RAID implementations. If using Windows Server drive management, which we do for testing, there are three possible configurations that would be commonly used;

FOB (Fresh Out of Box) measurements are taken when the SSD is new and hasnt been subjected to any use. As the device is used more we will see some lower results with write activity. Read speeds largely remain unchanged, so we can use these numbers as a comparison for the overall performance of the SSD. RAID 5 results are not included in two of these graphs as the read speeds mirror the other results, clouding the graph. The RAID 5 results are included where there are appreciable differences in performance.

The 4k Random Read Access time is the main means of checking the overall latency of any SSD. The Intel 910 scores well across the range of different Queue Depths. The RAID 0 and the 4 LUN results mirror each other closely, with the individual LUNs pulling ahead at overall latency in the much higher Queue Depths. 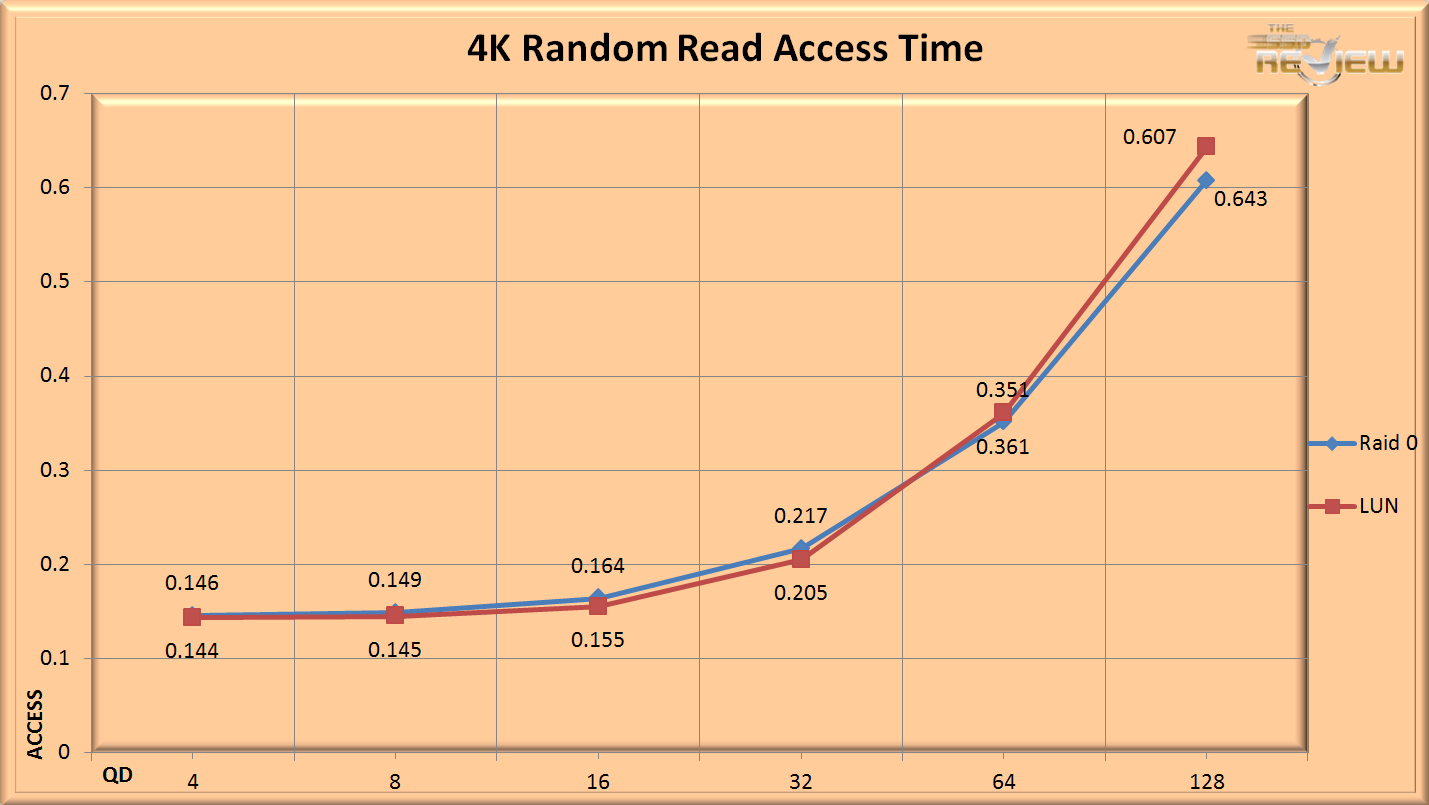 The 4K Random read measurements are one of the most-sought after measurements when making an analysis of drive performance. Indicative of the overall speed and agility of the SSD at random access, they are the litmus test for one of the key advantages that SSDs possess. We test with a five second ramp-time for all measurements that we provide for all benchmarks, for the purposes of eliminating bursty results. These results are well above the Intel advertised 180,000 rated IOPS.

Here we can see the results scale nicely across the higher Queue Depths with the RAID 0 actually pulling ahead in the higher QD performance, topping out at an outstanding 210,734 IOPS. Bear in mind that the RAID 5 results closely mirror those shown here for the 4k Random Read, almost exactly matching the RAID 0 results. 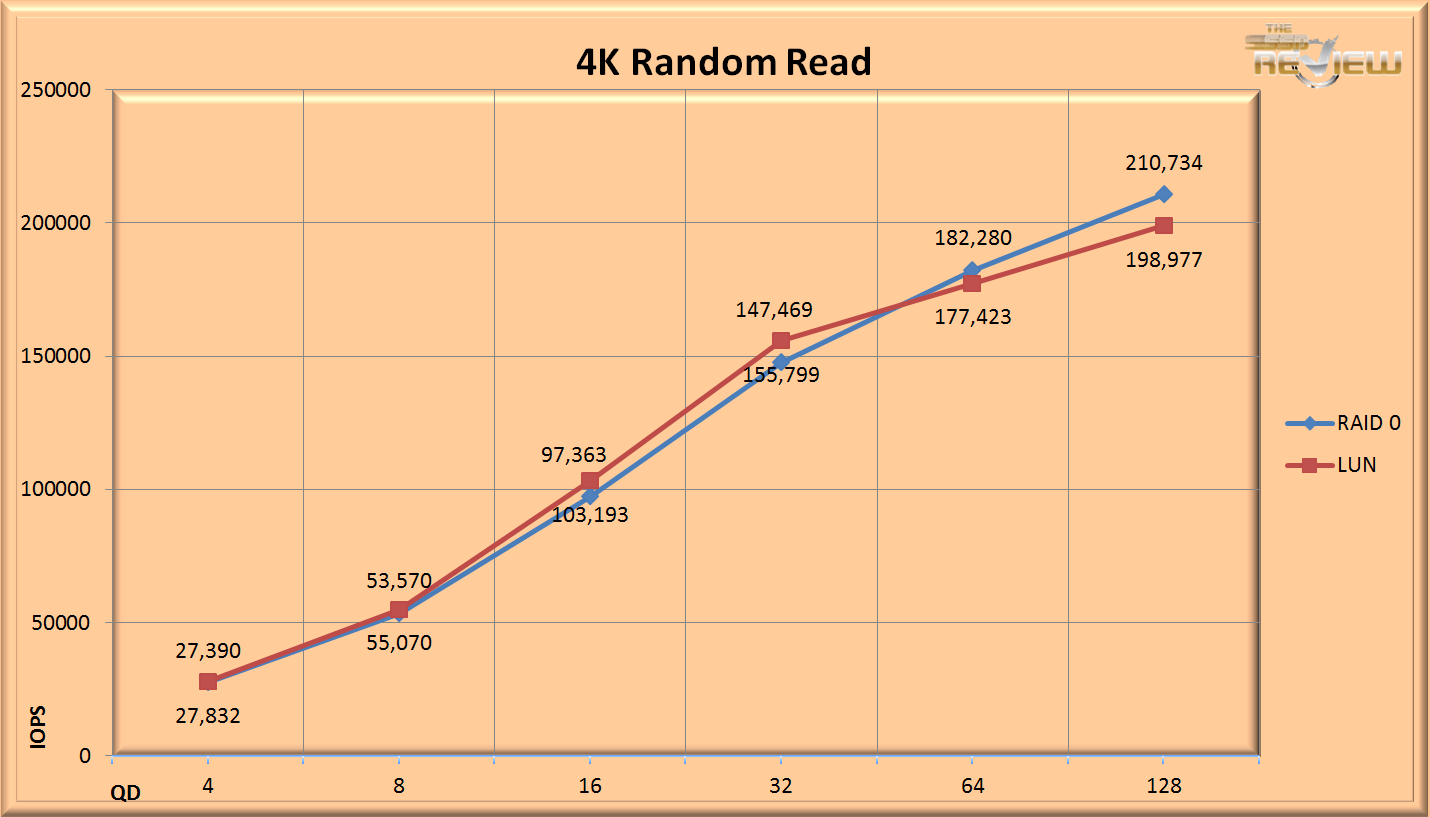 The 128K Sequential read speed will show us the maximum sequential throughput of the SSD with a realistic file size that the SSD would actually encounter in an enterprise usage scenario. The Intel 910 maxes out at 1.949 GB/s at QD128 with the four LUNs being accessed simultaneously. Raid 0 comes in with a slightly lower result at QD 128 with 1.861GB/s.

Finally, RAID 5 makes its debut into our charts, with somewhat lower read speeds, coming in at 1.6GB/s at QD128. As we move along in our testing, it will become apparent that there are some Windows limitations in the RAID 5 implementation that are effectively holding the Intel 910 performance back a bit. With other software based RAID implementations, there might be much higher results. 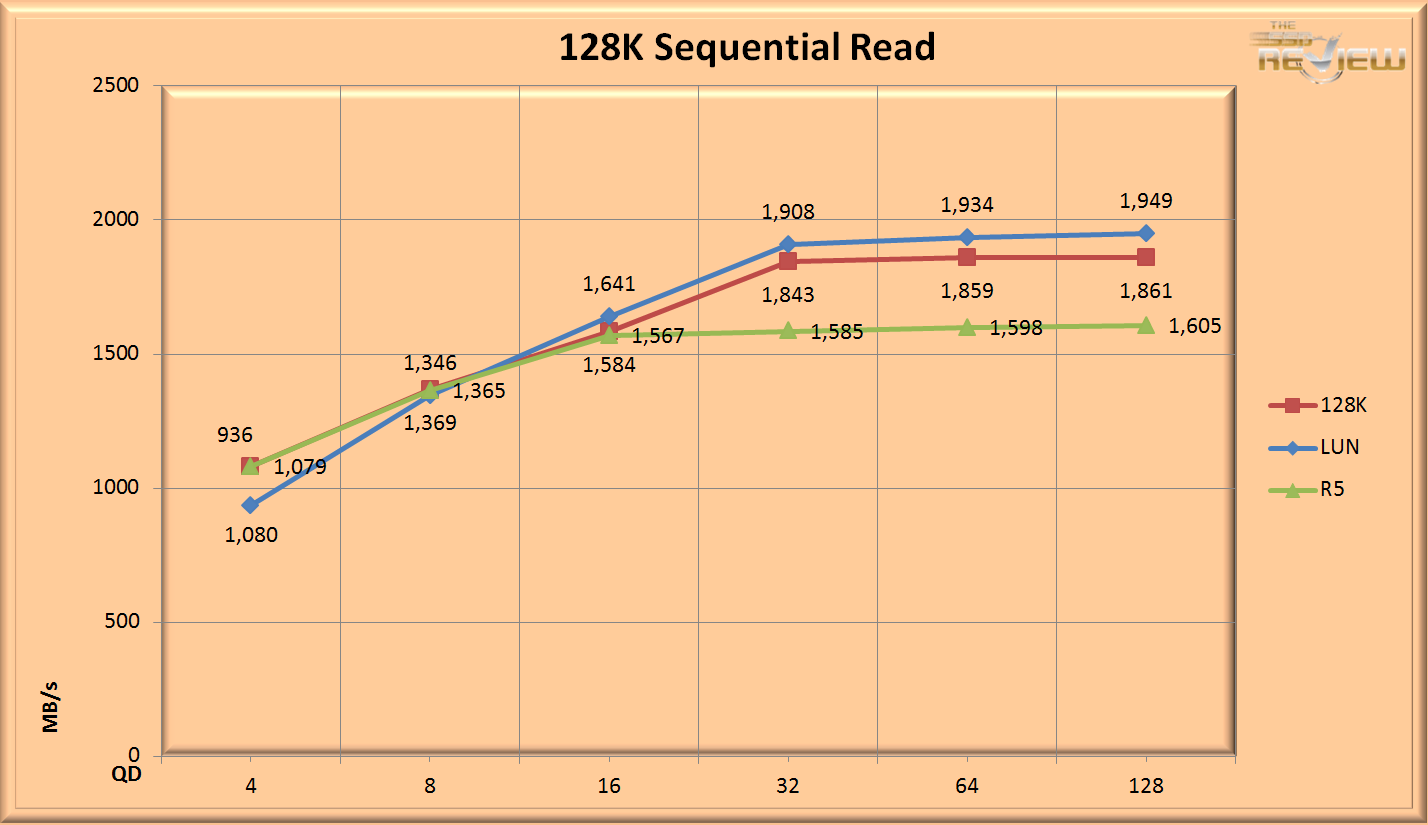 We begin delving into the difference between Steady State (SS), and 20% over provisioned (OP) execution for this battery of tests. We typically will include FOB (Fresh Out of Box) results, but for this SSD they will seldom be seen. They are also so much higher than the other results that they effectively alter the scale of the charts, blurring the granularity needed to see the differences between steady state and overprovisioned results.

The Steady State testing is conducted at 100% fill capacity, and utilizes full span writes. This is truly the torture test and gives an accurate picture of the SSD under the most demanding circumstances. Being a worst-case scenario, Steady State should be received as such. The 20% OP testing consists of 20% of the drive being left unformatted. The formatted region is filled to capacity, and written to full span. This provides results consistent with an optional performance boost for users.

For the 4k Random Write testing the Intel 910 scores well over the 75,000 rated IOPS that Intel is advertising.

The ‘Lun SS’ results (4 independent volumes accessed separately) come in at a maximum of 86,349 IOPS at a QD of 32, and the overprovisioned results for the same configuration score at a fantastic 98,845 IOPS at the same QD of 32. This is a tremendous amount of benefit from the 20% overprovisioning, and the clear winner at this measurement.

RAID 5 results are much lower, with the top speed logged at QD 128 being 24,428 IOPS. The lack of performance improvement with 20% overprovisioning signals that we may be running up against a limitation of the Windows RAID stack, and definitely not the performance of the drive. 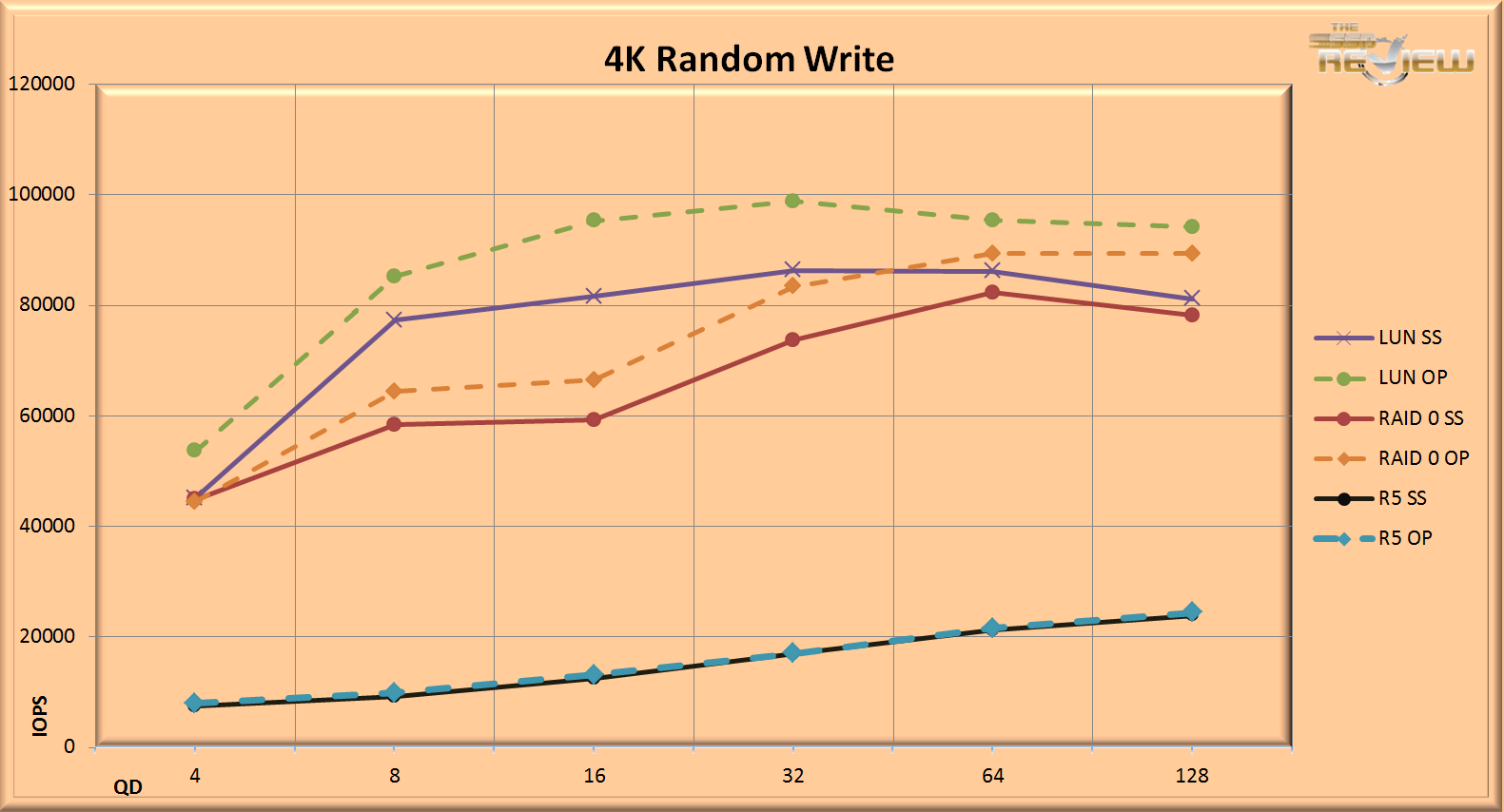 The 128K Random Write results shows that the performance is relatively steady across the range of Queue Depths hovering around 350MB/s for the Raid 0 and LUN results. The overprovisioning brings about some great results again, topping the 350 MB/s mark, and reaching 368MB/s for the LUN Overprovisioned results. RAID 0 scores 333MB/s at a Queue Depth of 32. 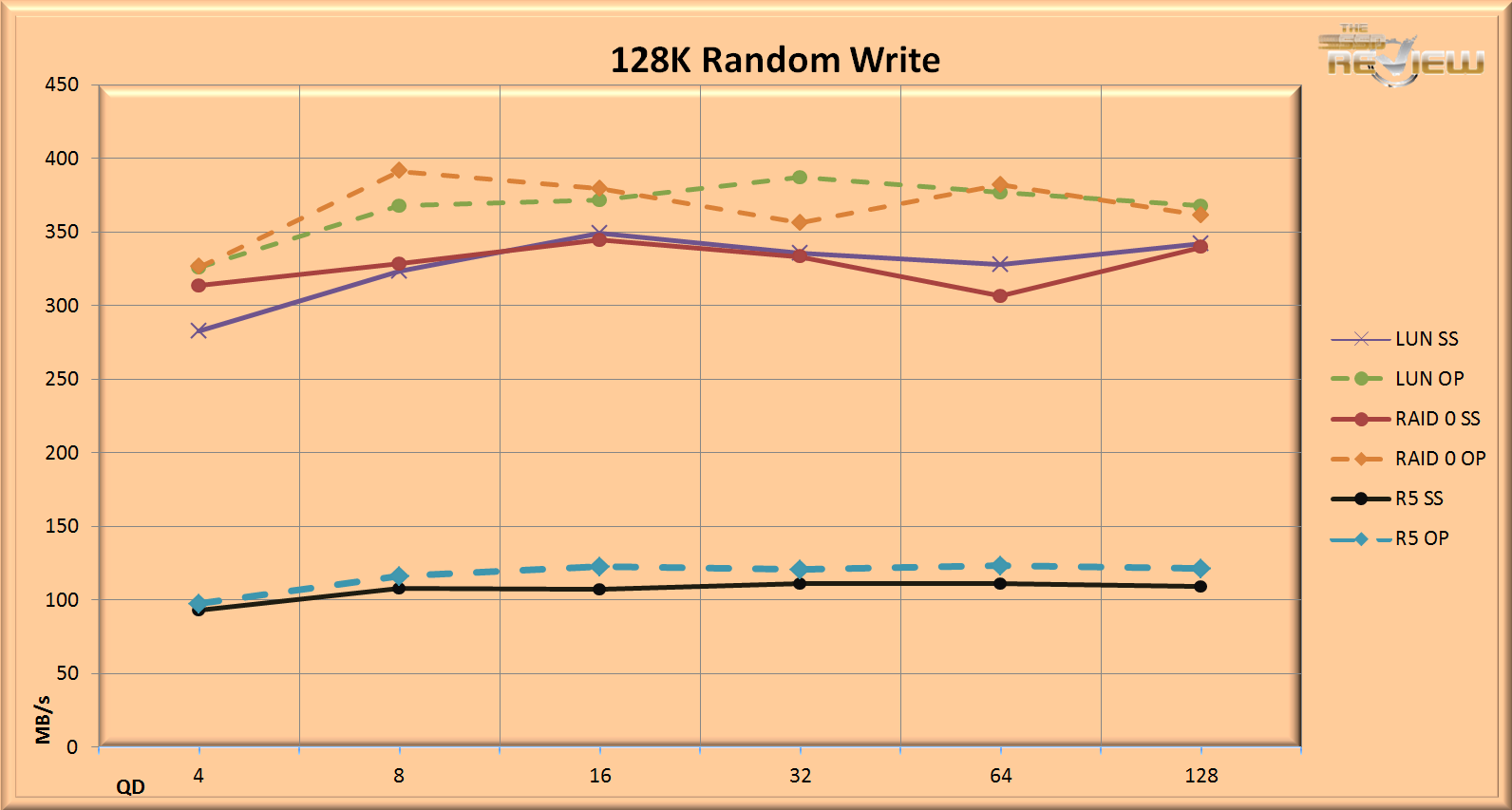