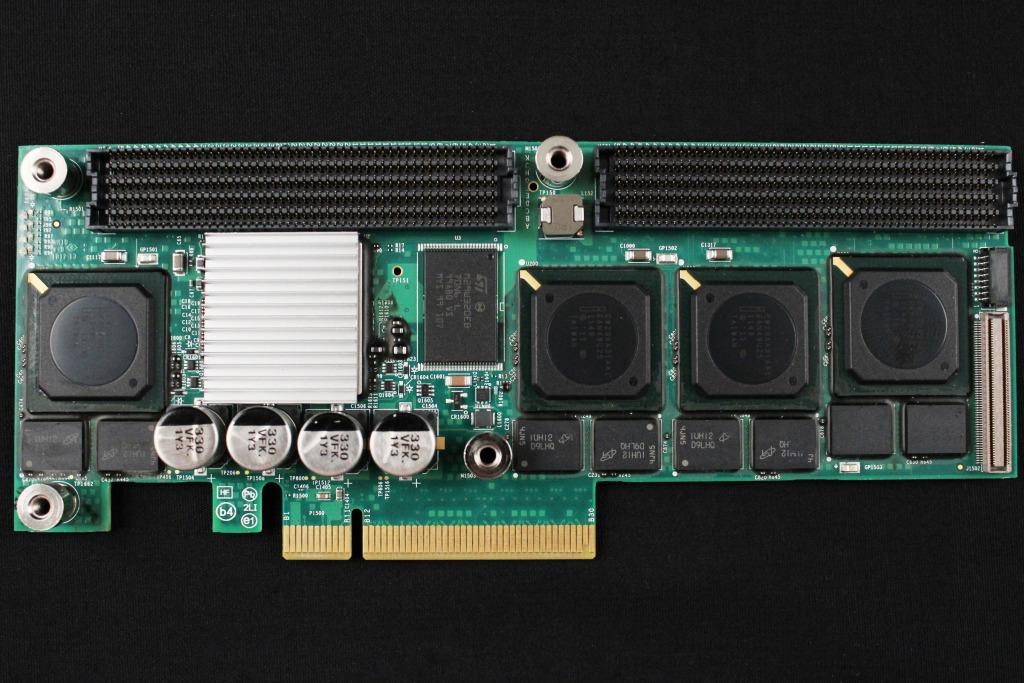 The bottom PCB is really the engine behind the whole unit. The four large black squares house the Intel/Hitachi EW29AA31AA1 processors. The large silver heatsink covers the LSISAS2008 processor. This venerable processor has been utilized in the popular 9211 series of HBAs from LSI for a few years now. This processor allows for ultra-fast latency, low driver overhead, and reliable performance. 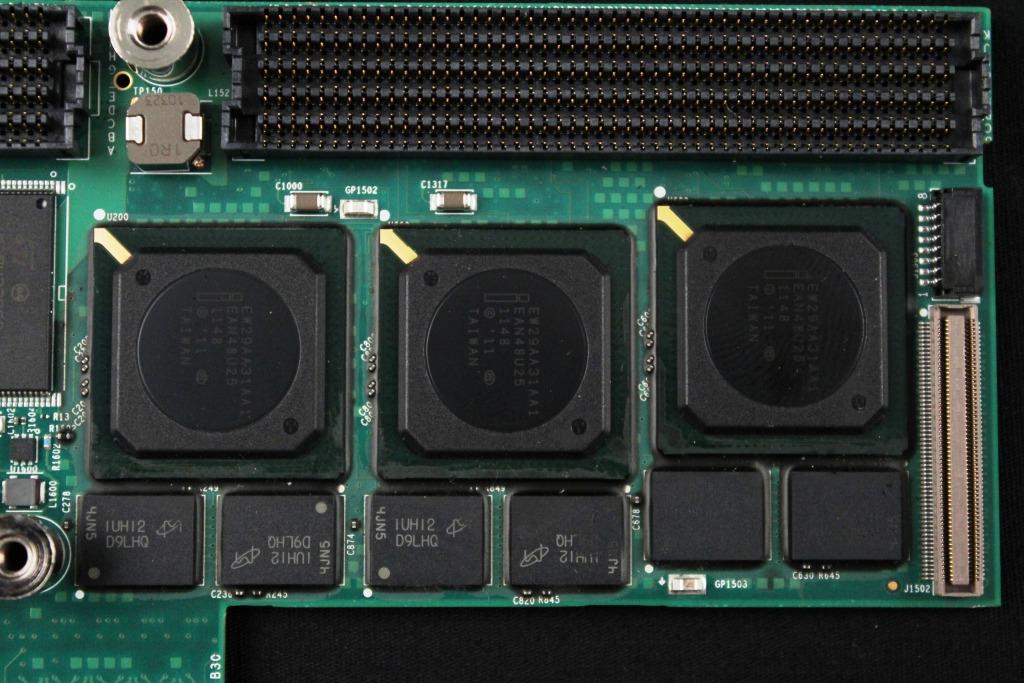 The 4 Intel-Hitachi SSD processors each control a 200GB bank of NAND flash and their housekeeping in its entirety. ECC, Wear Leveling, and Garbage Collection are all handled by these independent processors. This allows the Intel 910 to keep the management onboard and not offload it to the host system.

Some PCIe SSDs from Intel’s competitors offload all of these base-level processes to the host system, which can steal system resources. Especially as devices age, the ECC and Wear Leveling algorithms require more and more ‘grunt’ power to effectively manage the NAND. Keeping these systems onboard the SSD itself minimizes disruptions to the server environment.

As a byproduct of utilizing four processors, the SSD presents four individual 200GB drives to the host operating system. There are a number of ways that these different drives can be utilized, and we will cover several in our testing. The LSISAS2008 PCIe to SAS bridge merely passes these SSD controllers onto the system itself, and does not perform any RAID calculations. This approach keeps the driver stack very lean, and minimizes latency. As a result the Intel 910 is not a bootable device, to the dismay of computer enthusiasts everywhere.

Adding the RAID stack and the overhead of a boot ROM to this SSD would result in negative impacts to performance, and benefit very few of the members of its intended audience. The vast majority of servers utilize a small boot disk for the unit, so boot-ability is simply not a realistic requirement. 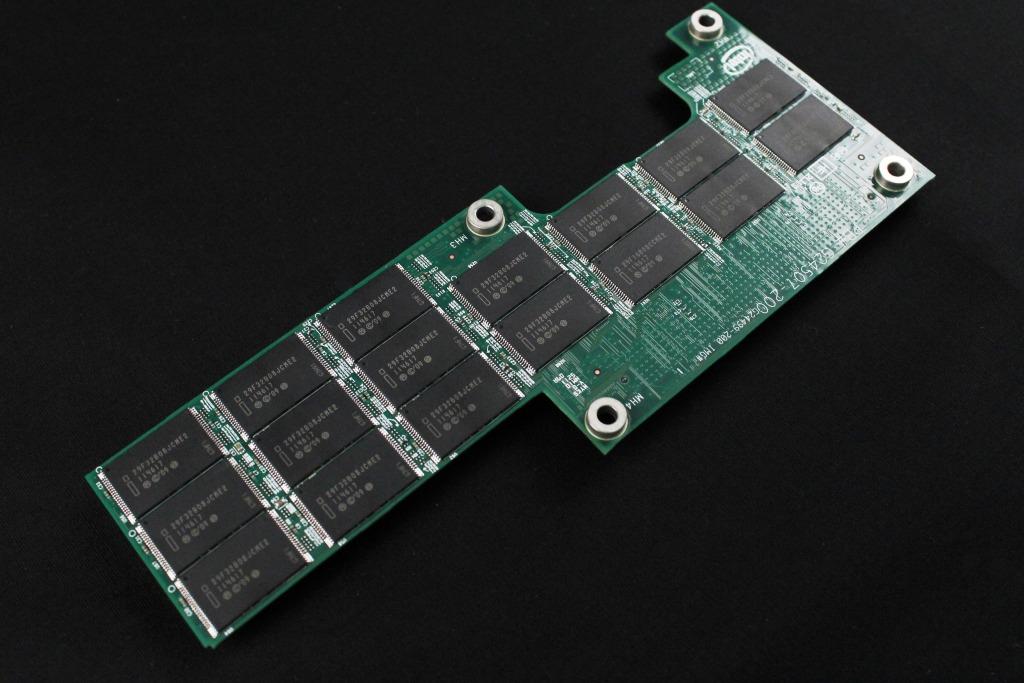 The middle tier of the Intel 910 is one of the best looking collections of NAND out there. Packed to the gills with IMFT 25nm HET (High Endurance Technology) flash, this middle tier houses nothing but NAND. The motivation to employ HET MLC is that it provides much higher endurance at a lower price point than the SLC that is used in some situations. Owning the fab also allows Intel to select the absolute best NAND for their SSDs. The Intel 910 will initially come in two capacities of 400 and 800GB. The 400GB model will only have two PCBs, with the top PCB likely being the one eliminated. 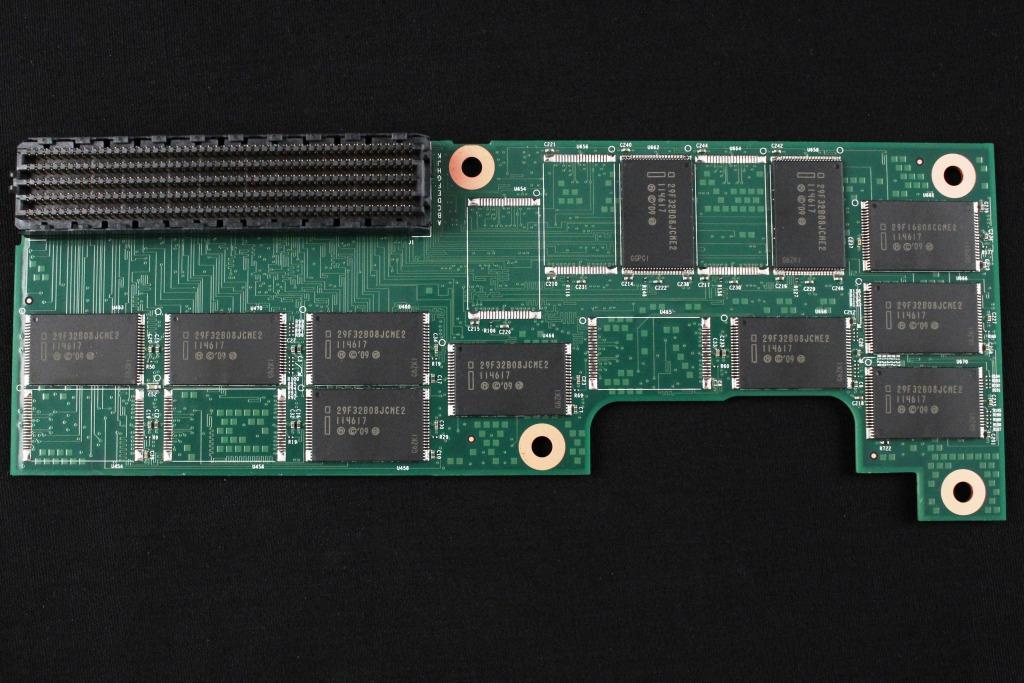 We finally come to the rear of the top panel. This PCB, much like the middle tier, also contains only NAND. Interestingly there are 6 open slots for NAND packages on this side of the PCB, and the bottom of the middle tier has an additional 6 empty slots for NAND available as well. This is definitely the sign of a promise for more to come, with higher capacity versions of these SSDs in the plans as Intel moves forward with this product family.