If the difficulty experienced reviewing this SSD is any indication of it’s caliber, the world is in for a pleasant shock as it was rather difficult to get the 910 to settle into it’s Steady State performance.  The 910 was literally like a race horse jumping the gate as it’s quick recovery made obtaining Steady State analysis a task in itself.

If you have any doubt that the Intel 910 Series PCIe SSD is anything less than a game changer, we are certain this will fade throughout reading of this report.

The rapid growth of flash technology into the enterprise sector has been very disruptive, to put it lightly. There are several approaches utilizing a multitude of different types of hardware. Many solutions call for external appliances that can be connected via a whole range of interconnects to the host server. One of the overriding problems with this approach is the latency that is incurred through the various means of connection. Every component that is added between the CPU and the storage subsystem is always going to incur some latency. With the massive latency improvements of flash storage being one of the key selling points, it easy to see that incurring any additional latency isn’t always an attractive option.

Another means of providing flash acceleration to the server space is by deploying RAID controllers and HBAs into the racks themselves. This is a common approach that is favored in large scale deployments. By placing the controllers involved into the rack, the flash is kept close to the CPU. One of the drawbacks to this approach is the other equipment associated with the controllers. Not all HBAs, RAID controllers, backplanes and expanders are created equal, so there must be careful selection of the components involved. This can be a large scale undertaking, and also involve large upfront capital expenditures for modernization of existing equipment. 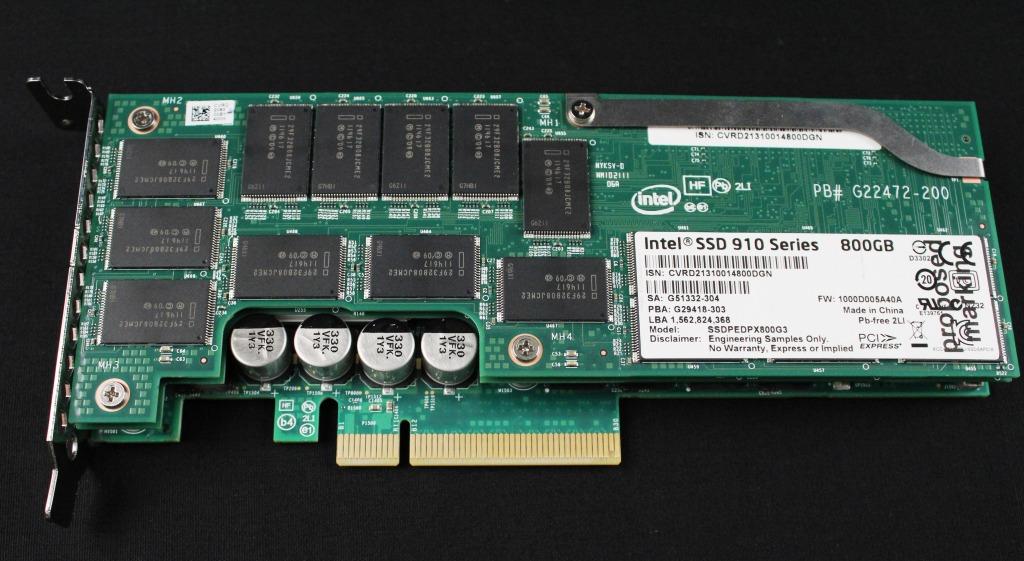 The PCIe SSD is by far physically one of the easiest ways to integrate flash storage into the server. The form factor is key, with no cabling or connections to other components involved, and the NAND is as close to the CPU as possible. By applying the benefits of the PCIe interface, virtually a ‘straight shot’ to the CPU with current generation chipsets, latencies can be kept as close to DRAM levels as possible.

We did note that this is physically the easiest solution, but not always the easiest in terms of configuration. Many PCIe solutions have intense management requirements, and drivers that incur host system overhead. While PCIe solutions can be the most attractive implementation in many scenarios, especially in existing systems, they aren’t always the best solution if it brings intensive system overhead requirements that can rob the host server of vital system resources.

Intel’s mission is to make the cutting edge PCIe SSD technology friendly and easy to use. Ease of integration is huge, and that is realized by bringing in a critical LSI component, the LSI2008 processor. Intel and LSI have been partners for a period of time, with LSI providing controller technology for Intel RAID controllers and HBAs, and also the LSI SandForce processors that are utilized in the newest Intel SSDs.

The benefits that selecting the LSISAS2008 bring to the table are important aspects for the Intel SSD. The LSISAS2008 is a stable, proven processor that can provide very low latency access. The low-overhead LSI OEM drivers are integrated into virtually every operating system. This allows users to simply slip in the Intel 910 and get right to work, with no changes to the existing server design.

Intel and Hitachi have jointly developed the EW29AA31AA1 SSD controller which is already in use in the Hitachi Ultrastar line of SSDs. With four of these high performance enterprise-grade controllers handling the NAND on the 910, there is no offloading of critical NAND management processes.

Paired with HET MLC for SLC-like endurance at MLC prices, the Intel 910 sports some simply outstanding endurance specifications. With an industry leading AFR (Annual Failure Rate) Intel is warrantying the 910 for ten full drive writes per day for 5 years, a 30x endurance improvement over standard Intel MLC offerings. Measured with full span 8k writes, this works out to an amazing 7 Petabytes for the 400GB and 14 Petabytes for the 800GB model.

The performance specifications are equally impressive, with 2GB/s sequential read and 1GB/s sequential write performance for the larger model. 180,000 read and 75,000 write IOPS are also impressive, especially considering that Intel does not market F.O.B. (Fresh Out of Box) performance specifications with their newest enterprise SSD. These specifications are assuming that the SSD will be utilized at 100% capacity and in Steady State conditions, as all Enterprise class SSDs are when used correctly. Being a premium tier of storage, these SSDs will be used to the fullest extent possible.

There is also an available ‘Performance Mode’ for this device. This allows the user to configure a higher average power draw for the SSD which results in a sequential write performance increase from 1GB/s up to 1.5GB/s. This does increase the average power draw from 25 Watts up to 28 Watts, and peak output to 38 Watts.