With the introduction of the Samsung XS1715, back in 2014, we were able to review our first ever PCIe SSD in a 2.5″ form factor. Utilizing the NVMe interface, it provided from some jaw dropping performance. At the time Intel also had (and still has) multiple 2.5″ form factor PCIe SSDs within their Intel SSD Data Center family lineup. These products, while they aren’t exactly bleeding edge any longer, answer the needs of many and are still very competitive in the PCIe segment of the market. HGST, however, has finally decided to take a step in to play.

HGST has a vast amount of SAS SSDs in the server market, but recently they have released a new set of PCIe 3.0 SSDs, the SN100 series. The SN100 series has been developed for cloud, hyperscale, enterprise and high-performance computing where space and/or power consumption is critical. The Ultrastar SN100 series follows that of the Intel DC family of products with both 2.5″ and HHHL form factors available. Utilizing the NVMe interface it is able to deliver some high-speed specs and high-density capacities up to 3.2TB, which should make it a very competitive options for those in need of such a device. Let’s get on with today’s review and see how it competes in our bombardment of benchmarks! 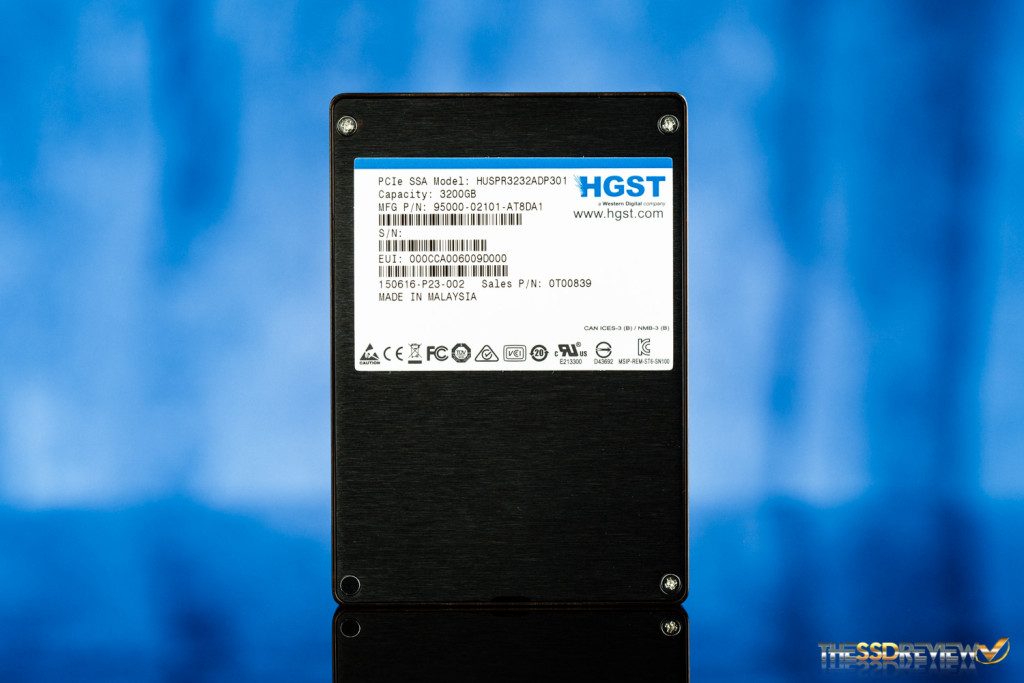 The HGST Ultrastar SN100 series comes in both HHHL AIC (SN150) and SFF 2.5″ (SN100) drive form factors. Today we are reviewing the SFF 2.5″ model or SN100. Capacities for the 2.5″ model are available in 800GB, 1.6TB, and 3.2TB while the HHHL AIC model is only available in 1.6TB and 3.2TB. Supporting PCIe 3.0 x4 these SSDs are capable of read speeds of up to 3GB/s and writes up to 1.6GB/s. In terms of random performance they are rated for up to 743K IOPS read and 160K IOPS write! The endurance rating for the SN100 is 3DWPD with a 5 year warranty, which puts it in line as a light mixed/read heavy workload product for use cases such as Online Transaction Processing (OLTP) and Online Analytical Processing (OLAP), High Frequency Trading (HFT) and virtualized computing.

The Ultrastar SN100 follows the 1.1a NVMe standards. It supports standard NVMe drivers, but HGST also have optimized drivers for it as well. It can be managed through their HGST Device Manager (HDM) software. UEFI boot is supported for those who will utilize it.

Because it is an enterprise product it comes with all the reliability features one could ask for. There is advanced power management, Secure Array of Flash Elements (S.A.F.E.) Technology, end-to-end data-path protection, advanced ECC, secure erase, PowerSAFE Technology (power fail protection), and hot-plug support. From this, these SSD boast a 2 million hours MTBF rating and an annual failure rating of 0.44%. The UBER rating for this SSD is less than 1 sector per 10^17 bits read. Furthermore, the drive supports the use of native 512-byte or 4096K-aligned sector sizes with a metadata size of 0 bytes. The 520-byte or 4104K-byte sizes can be emulated by specifying a metadata size of 8 bytes should the user want to implement T10 DIF protection.

The design, similar to many 2.5″ SAS drives allows server OEMs to easily integrate these latest NVMe PCIe SSDs into their server designs and help to expand adoption into the market. It is 15mm thick. The connector is U.2 or SFF-8639 layout. It also features three LEDs for debugging. The one on the connector side is the heartbeat LED showing it is powered on, the other two are on the opposite side. The LED above the USB connection is to show read/write activity while the final one is to show if the drive is having a fault. The USB port is for factory use only.

There are vent holes to allow airflow through the casing to help cool the components. The SN100 series requires 300 LFM of air flow in order to operate within its 0-70C temperature range. The HHHL AIC has a 0-55C range. Due to the inclusion of thermal and power throttling, if it reaches 85C it will throttle and at 90C it will shut off. In-band and out-band temperature monitoring is available using SMBus.

Once taken apart we can see that there are two PCBs stacked upon one another. One holds the majority of the NAND chips and super capacitors while the other has the controller and DRAM. Thermal pads are utilized on the outer sides to help distribute heat efficiently.

There are nine 4Gb packages of Micron DDR3-1600 DRAM. We can see that there is an entire array of supercaps in order to provide power for HGST’s PowerSAFE technology, which provides data persistence and instant backup and recovery in the event of an unplanned power failure.