HD Tune is a Hard Disk Utility with many functions from error checking, health testing (S.M.A.R.T.), and of course benchmarking. To build upon our real world write test we also looked to see where the write speeds leveled off to by using HD Tune Pro. If SLC caching is being utilized, this test will show it. 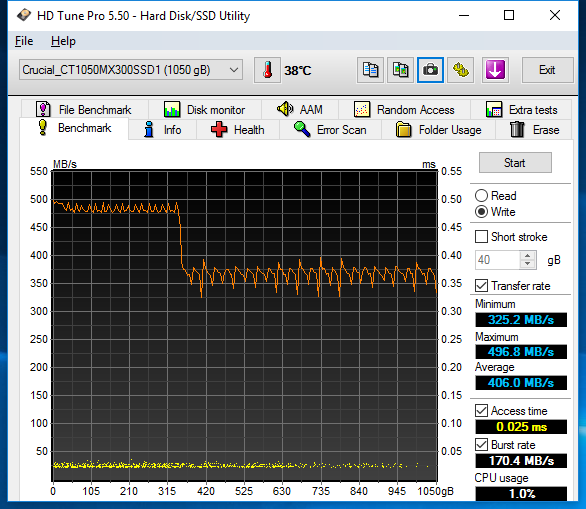 For one last benchmark we are yet again utilizing HDTune. HDTune shows us that the average native write speed for the MX300 will level out to about 360MB/s once the dynamic write acceleration buffer fills.

The 1050GB Crucial MX300 achieved better than rated speeds when tested on its own, reaching sequential speeds of 535MB/s read and 516MB/s write. In RAID 0 we were able to see double that, with reads and writes just over 1GB/s. When comparing QD1 4K read performance to other SSDs, such as the Samsung 850 EVO, its results are a bit on the low side at 30MB/s. The Samsung 850 EVO is 50% faster at QD1 on average. During 4K QD1 writes they are similar at about 150MB/s. When in RAID 0, performance for 4K QD1 write improves drastically, but read speed actually diminished slightly. Still, however, in real world tasks, performance is similar overall. This is shown in PCMark Vantage and PCMark 8.

In PCMark Vantage the MX300 1050GB achieved an average score of 86K points. In RAID 0, it only improved slightly to 92K, however, changing the array stripe size to something smaller like 8K, resulted in an overall score of 113K points. This result showed us that for most standard tasks a smaller stripe size is best. In PCMark 8 performance was similar to the 750GB model we reviewed before. The MX300 1050GB does not do well during the heavy workload phases, but improves quite a bit in the recovery phases. This improvement, however, isn’t enough to place it up there with the best performing SSDs. In RAID 0 on the other hand, it performed quite well and had the lowest latency in the recovery section compared to our pool of SSDs, it just didn’t scale well in terms of bandwidth performance here.

Next, when we threw out 30GB file transfer test at it, the 1050GB MX300 averaged almost the same as the 750GB variant and in RAID 0 we saw nearly double the performance at 1GB/s. As a single drive it also touted very good efficiency, just as we were expecting with Micron’s latest 3D TLC. Idle power consumption was also very good.

Finally, we utilized HDTune to show what the lowest write speed would be on average during sequential file transfers and the result is about 360MB/s, which is better than the 750GB model, but not quite up to par with the Samsung 850 EVO at this capacity.

In the end, our “predicament,” with getting a 2TB sample actually turned out to be a blessing as it allowed us the perfect opportunity to demonstrate just how well the newest MX300 SSDs stack up to the competition on their own and in RAID 0. With an abundance of features including power loss protection and full hardware encryption, decent performance, and competitive pricing, the Crucial MX300 SSD offers plenty of value for those of you looking for a mainstream SSD, especially at the 1TB capacity.

In RAID 0, performance is even better. Working with large media files and need another volume to transfer to and from? Got a bunch of VMs running at once? Can’t fit another PCIe SSD in your system? This is the way to go. You get 1GB/s sequential read/write and faster random speeds, high capacity capabilities, and great efficiency from Micron’s latest 3D TLC.

It is an exciting time to watch the market. 3D NAND is finally going mainstream and soon were going to have more 3D NAND powered options to choose from. Higher efficiency, more capacity is just the beginning. With the added competition from all NAND manufacturers and what we have heard during FMS this year, prices should also drop even farther and we may just see hard drive price parity sooner than expected. We especially look forward to seeing what comes of Micron’s 3D MLC when released, but until then, we will enjoy the 3D TLC products we now have on hand and so should you.

Check out the Crucial MX300 at Amazon Today!

With an abundance of features including power loss protection and full hardware encryption, decent performance, and competitive pricing, the Crucial MX300 SSD offers plenty of value for those of you looking for a mainstream SSD, especially at the 1TB capacity. In RAID 0, performance is even better.