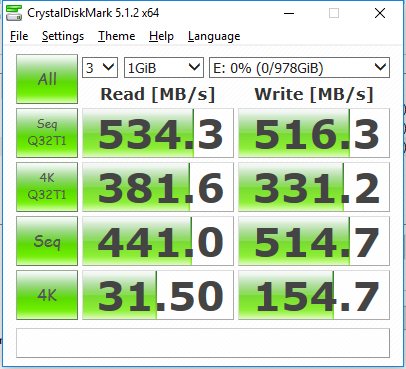 Crystal Disk Mark also shows that the 1050GB MX300 delivers very good mainstream performance. Nearly 1GB/s read and write were reached in RAID 0. 4K numbers are good in both single drive and RAID 0 configurations. On an interesting note, 4K QD 32 speeds didn’t increase much when utilizing one worker, therefore to get the most out of the RAID 0 config, the software needs to utilize multiple threads, not just one.

In AS SSD, the 1050GB Crucial MX300 attained an overall score of 1150 points and 1729 in RAID 0. Overall, the speeds are very similar to that of the 750GB model. In RAID 0 the sequential speeds reached 935MB/s read and 944MB/s write. QD1 4K read speed decreased slightly, but write speed doubled. Furthermore, we were able to reach 128K IOPS read and 111K IOPS write when in RAID 0. During the copy test the speed nearly doubled in all benchmarks. A best of 818MB/s was achieved during the ISO portion.

Finally, AS SSD mirrors over the results we have seen in our other benchmarks. Sequential speeds double in RAID 0, 4K write doubles while read does not, but overall, we see a nice improvement in performance.