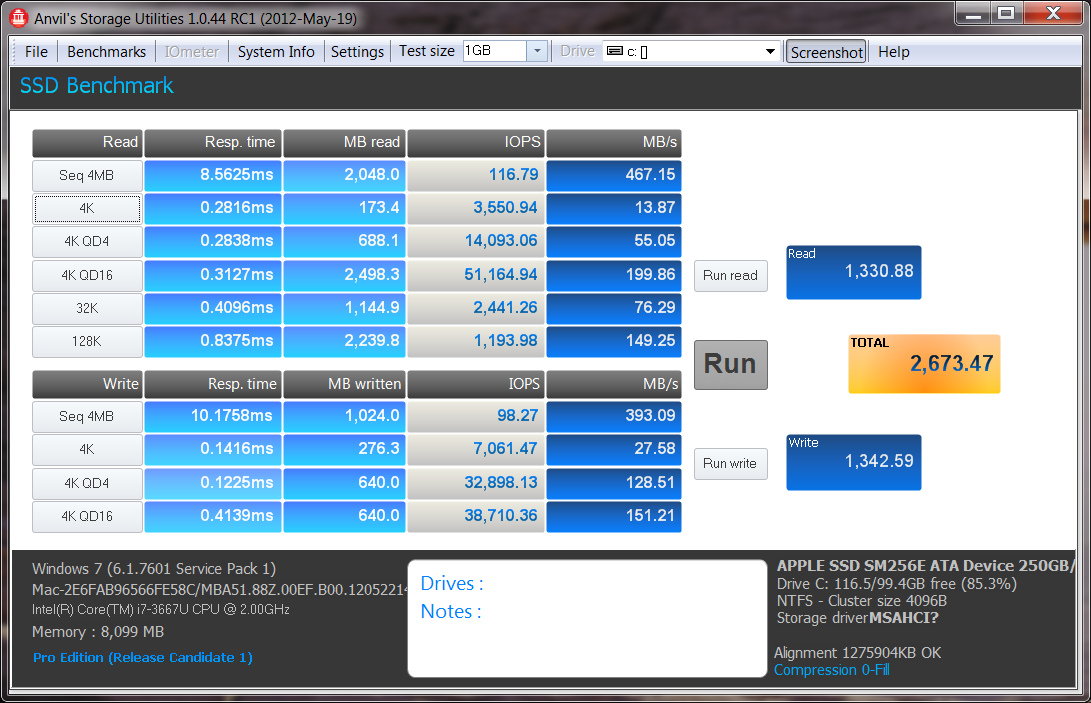 Anvil provides several different windows to the performance of the Apple SSD SM256E (AKA Samsung PM830) and it also shows us that, although we are still running in Windows 7, Mac is still in control (bottom left).  Although we could make a list of the transfer speeds we would like to see improved, IOPS results and disk access times are half decent.

The MacBook Air pulled through PCMark Vantage HDD Suite testing with a Total Point Score of 36892 points and a high transfer speed of 285MB/s while testing in Windows Media Center which, as much as we hate to say it, is typical of what we see in most pre-configured laptops and Ultras.  At the very least, we would have liked to see one of two of the Vantage results break into the SATA 3 range:

It is unfortunate that we couldn’t uninstall, migrate and do independent tests on this SSD as we are certain much of the low results that we are experiencing are the direct result of this SSD being pre-configured and also having a dual boot system in place.

As stated at the beginning of this report, I had never used an Apple computer prior and transition was relatively painless and easy to learn.  OSX itself is much more appealing than Windows and from one screen to another are what definitely sets OS X apart from the PC.  It has a very smooth look and feel and is very customizable to the users needs.

Of all the Utilities found on the MacBook Air, Face Time simply has to be the one that surprised me most.  Without any knowledge of it whatsoever, I simply input my sons iPhone number, called and there he was answering in HD with an absolutely amazing picture with no delay.  He laughed as he had to admit that he had never used Face Time, or even explored it prior, but thought this would be an excellent reason to acquire a MBA for his use as well.