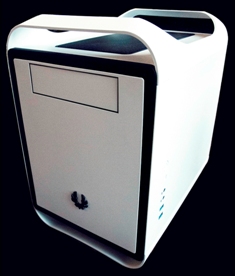 Much of modern day and future technology is focusing on making products smaller and smaller, yet still completely functional and easy to use. For personal computing, the thinking is reverse, as more people prefer to have mid-sized or XL-sized cases and builds for full functionality.

It makes sense, and until recently, mini builds were typically utilized as NAS units, home servers, and/or HTPCs. Still, the price of getting smaller meant the consumer more often than not had to pay a premium over just making a standard mid-tower build.

Fast-forward to today where mini-ITX and mini-ATX form factors are gaining steam, and pack all the bells-and-whistles that are expected. The problem of a proper chassis still remains. When it came to mini-PCs, cases were usually missed more than hit with the market. Even the best of the pack had at least a few things wrong, be it a design flaw, or shoddy build quality.

When, earlier this year pictures emerged of a beautiful new m-ITX case created by BitFenix, I did not think much of it. Jump to Computex, and I was hooked. Just like the Shinobi before it, BitFenix had seemingly created a masterpiece, this time in the name of the “Prodigy”.

Borrowing designs and ideas from previous BitFenix cases, we now look and determine whether (or not) the Prodigy holds up to its name.

As always, we will take a complete look around the exterior of the chassis. Right off the bat you will most likely make an immediate connection with the Apple Power Mac G5. Indeed, much of the design seems to be inspired by it, but unlike the G5, the Prodigy has a ton of room to work with, without the hassles of removing/sawing off parts of the case to make everything fit. The accessory package is somewhat lackluster to what we are used to seeing from BitFenix, but it does include everything you need for arming the Prodigy, including mounting screws, thumbscrews, and a quick-install guide.

The Prodigy also comes in a variety of colours, but this review focuses solely on the Artic White version. It is nice to see BitFenix offer something extra in this department, instead of limiting their chassis to only generic colours of white and black. As far as the size goes, it is only available for the mini-ITX form-factor, with dimensions of 250 x 404 x 359mm (cube shape), and weight of 7kg. Starting from the front then we have a 5.25 expansion bay slot as well as the BitFenix logo, which can be taken off or fixed in a different orientation.

As with the Shinobi before it, the Prodigy has the always-adored SofTouch finish, but unlike the Shinobi the material is also present on the two exceptionally sturdy and bendy FyberFlex handles on the top and bottom of the case which are great for carrying the Prodigy around at LAN events.

The pronounced black strip is also coated with the rubbery SofTouch, and contains many small holes meant for ventilation. The strip changes based on colour (and the Prodigy has a full palette of colour variations), so if it were the matte-black Prodigy, the contrasting colour of the strip and outlines would be white.

Moving to the back, there is a large grill housing a custom BitFenix Spectre Pro 120mm fan which can be replaced with a 140mm fan.

Around the mid then we have the cutout for the I/O panel, and below that is room for the power supply. The great thing about this PSU placement is twofold: for one, it allows the use of a standard ATX power supply.

Secondly, since the flex handles support the entire chassis, there is room for proper ventilation for the power supply to move air around.

Keep in mind that there is a bracket/shield that needs to be removed in order to install the PSU and keep it in place.