Super Talent has once again been busy behind the scenes and their newest entries into the SSD market include a new M.2 NGFF design called the DX1. Anything but ordinary, the STT DX1 is available as a SATA M.2 SSD (known as the STT NGFF DX1), or that of a PCIe X1 interface where a SATA 3 SSD is routed through a PCIe to SATA bridge and travels via a single PCIe lane (STT PCIe DX1).  A bit confusing at first, the additional benefit of the PCIe DX1 is that it is a fully bootable SSD and only the second bootable M.2 PCIe SSD we have seen to date. Perhaps this is the start of a trend. 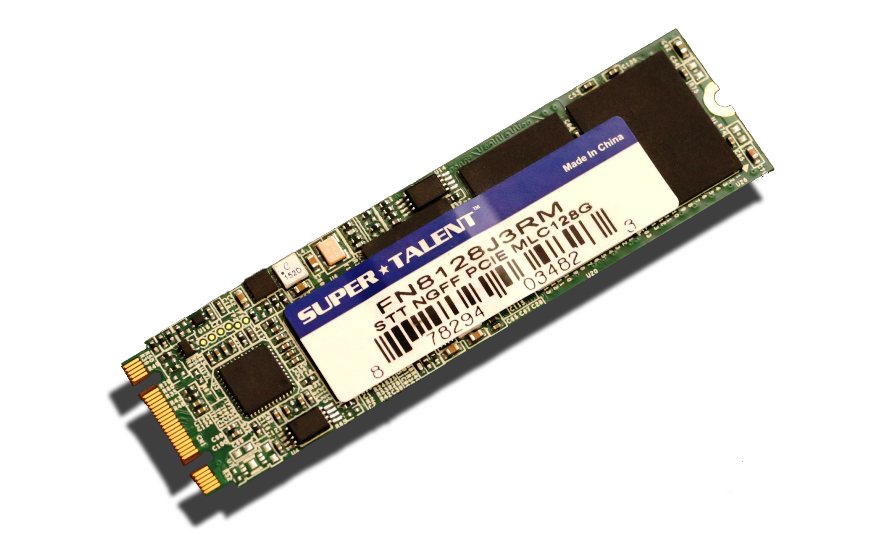 The value of bootable M.2 SSDs will be evident soon enough as PCIe M.2 SSDs become available and many realize first hand that there needs to be a ‘bridge’ that enables these new ultra fast SSDs to function as a boot drive on yesterday’s PC and Mac systems.  We saw this first hand with our review of the Samsung XP941 M.2 SSD that had us that much closer to seeing it’s 1.2GB/s performance in our main system on a daily basis.  From there, we reviewed the ioSwitch Raijin which  contained the new Plextor M6S M.2 NGFF 256GB SSD on a PCIe X2/4 adapter, the Plextor being the first single form factor SSD that we have ever seen with its own boot files.

The Super Talent PCIe DX1 will be available in capacities of  32, 64, 128 and 256GB and is fully customizable to manufacturers in either MLC or SLC NAND flash memory.  It is a SATA 3 SSD with a PCIe Gen 2 interface and will only function through PCIe lane travel, unlike SATA M.2 SSDs that presently connect directly via system SATA ports as we saw with our review of the Toshiba HG5D SATA M.2 SSD.  Performance of the STT PCIe DX1 is listed at 380MB/s read and write speeds and this SSD is a 80MM M.2 form factor size.

As mentioned above, the STT PCIe DX1 M.2 SSD is a SATA 3 SSD that is routed through a single PCIe X1 lane and not the systems SATA ports.  It contains a JMicron JMF667H 4 channel SATA 3 controller which is a 3rd gen ARM based device.

We recently looked at this controller in our review of the Kingspec Multicore PCIe SSD which contained 4 mSATA SSDs, each equipped with JMF667H controllers.

Data travel to or from the PCIe DX1 is by way of the PCIe Gen 2 interface through to the ASMedia ASM1061 PCIe to SATA bridge, the JMicron SATA 3 controller and finally to or from the memory.  The ASM1061 is capable of 2.5 or 5Ghz signalling and provides for 2 port SATA travel via a single PCIe lane.

There are also four chips of Micron 20nm ONFI 3.0 MLC memory that contain a Micron FBGA Code of NW509 which can be decoded to the product number of MT29F256G08CECABH.  We have seen this memory previously in Crucial M500 SSDs.

A new characteristic found within  at least two M.2 SSDs is the fact that we are now seeing self-contained boot files within the SSD itself.  This will eventually be a huge factor as availability increases and companies look for a way to incorporate the PCIe M.2 into present day systems where the system BIOS relies on SATA devices to boot the system.  This screen shot is seen, prior to system BIOS when the Super Talent PCIe DX1 SSD is installed and each and every time the system is started.

Presently, all boot instructions for SATA SSDs reside within the chipset and the motherboard BIOS controls what SSD is used as the bootable system SSD.  M.2 SSDs are not recognized, just as PCIe SSDs weren’t; they required their own BIOS that had to boot before the system BIOS in order for the PCIe card to be bootable.  This is the same with PCIe M.2 SSDs.

For those new to M.2 SSDs, we have two very pertinent articles that help you to understand the difference between PCIe and SATA M.2 SSDs and another that covers our toolkit of M.2 SSD adapters in our arsenal.  For the Super Talent PCIe DX1 SSD, we were able to confirm through separate PCIe adapters that the boot files were within the SSD and not the adapter or any external medium.  We were also able to confirm that this SSD would not work in our SATA M.2 SSD adapters and, in fact, wasn’t even recognized as a SATA SSD in the system BIOS. Through this, we came to the conclusion that the PCIe DX1 is a SATA 3 SSD where information travels through the PCIe to SATA bridge and directly to and from the PC via the PCIe lanes and not the SATA ports.