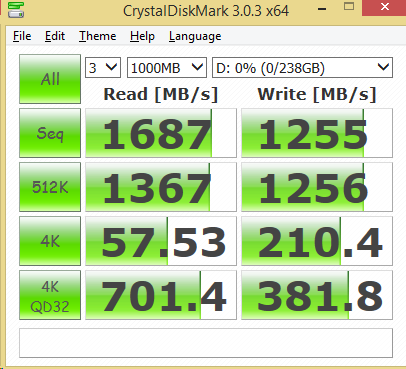 In Crystal Disk Mark we can see that while read and write maxed out at 1,687MB/s/1,255MB/s respectively, random read speeds are much higher than the AHCI variant. 512K read has improved 100MB, 4K read has increased 8MB/s, and 4K QD32 performance went up over 150MB/s. 4K write speeds are also almost 50MB/s faster! This performance is great to see!

Following the trend, the Samsung SM951 NVMe reached a higher overall score of 2623 points. Read and write max out at 1.9Gb/s and 1.2GB/s respectively. 4K read is also 52MB/s while 4K write is 168MB/s. In terms of IOPS we can see it is able to hit nearly the rated spec, coming in at 283K IOPS read and 81k IOPS write.

In the AS SSD Copy Benchmark the best speed of 1,557MB/s was achieved via the ISO test which is 50MB/s higher than that of the AHCI variant we tested previously. Program copy performance increased nearly 100MB/s as well, however, Game performance dropped down to 723MB/s, which could be due to the difference in tested capacities. Overall, great results.

The SM951 NVMe SSD achieved a Total score of 9,372 points in Anvil Storage Utilities, which is actually lower than the AHCI variant, but this could mainly be due to the lower sequential write speed. Reads max out at 1.9GB/s while writes max out at 1.15GB/s. Again we see some strong 4K read and write performance, reaching 54MB/s and 189MB/s respectively.

Iometer is an I/O subsystem measurement and characterization tool for single and clustered systems. It was originally developed by the Intel Corporation, however, they discontinued work on the program. In 2003 it was re-launched by an international group of individuals who are now continuously improving, porting and extend the product that is now widely used within the industry. This is a very powerful benchmarking tool and we are just now starting to integrate it into our consumer reviews.

First up in Iometer we ran two workloads at a QD of 64 in order to max out performance, one was 100% random read and the other 100% random write. As you can see, thanks to NVMe, the SM951 is able to achieve nearly 300K IOPS! This is about 120K more than the AHCI variant. Write IOPs start off around 90K and drop down to an average of 10.5K, which is similar to the AHCI variant.

Now, let’s be real here, while it is great to see such high performance due to NVMe, consumers will never reach such high queue depths and utilize such high IOPS. Most of the time we will reach only a QD of 1-8. For this reason we are now going to look at the other advantage that NVMe brings to the table, lower latency. Let’s see how the AHCI and NVMe variants compare.

In order to compare we ran our standard 4KB random read-write workloads at QD32 on both SSDs. As you can see in the graph above the SM951 NVMe SSD’s read latency is 0.119ms, about 34% less than that of the AHCI variant. Again, when looking at the write latency, the NVMe SSD’s latency is 58% less than the AHCI model at 0.343ms. NVMe definitely helps to reduce latency as promised.