The Samsung SM951 is one of the fastest SSD solutions out for those with a need for speed. It offers speeds that put most SSDs to shame and does it in a small M.2 2280 form factor. Last week we took a look at the 512GB variant that utilizes the AHCI host controller interface. To say the least, the performance was very impressive. In that review, we mentioned that the NVMe variant is starting to show up and that we would publish a review on one as soon as we could and well, today is the day. If you are a storage nut as I just happen to be, please get comfy and continue reading as we take a closer look at the NVMe variant of the Samsung SM951 M.2 PCIe SSD! 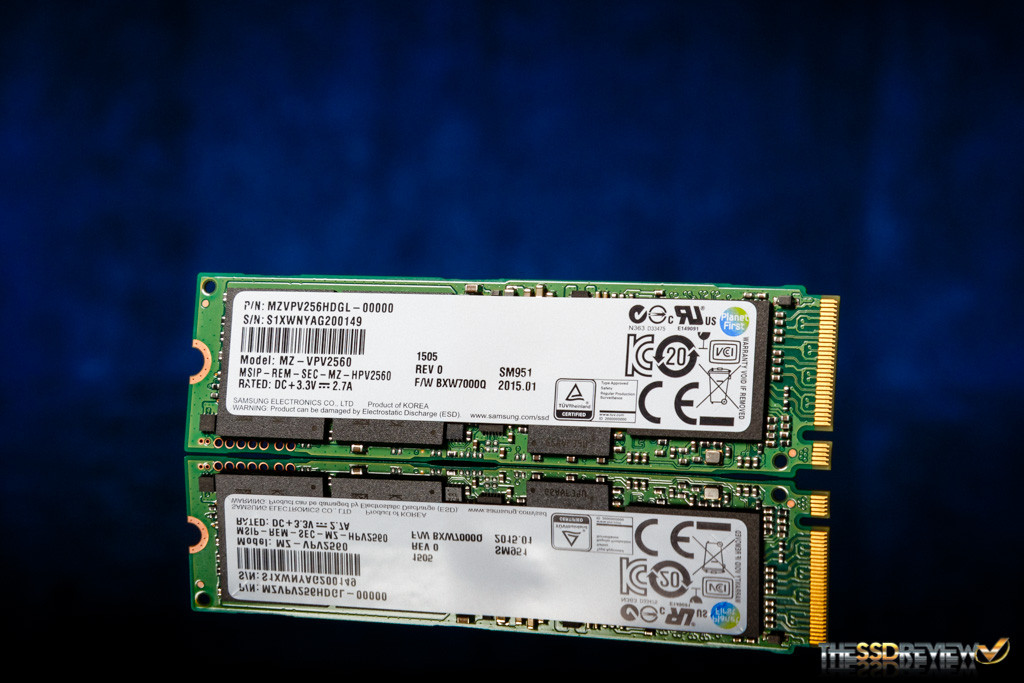 It has the same features as the AHCI variant, TRIM support, APST support, L1.2 power mode for 2mW consumption, end-to-end data protection and RoHS compliance. It also has an MTBF of 1.5 million hours. Other ratings such as endurance and warranty, should be similar to that of the AHCI variant, where the seller offers it.

As for pricing and availability, we haven’t seen any in stock yet, however, we will update you as soon as we do! Also, for those who do not yet know, the NVMe variant’s product number starts with MZVPV while the ACHI variant starts with MZHPV.

We have covered NVMe in the past.To recap it allows for lower latency, which results in higher throughput, however, there is a draw back. In order to take advantage of this newer protocol and boot from it you need a newer system that supports it, such as an Intel Z97 or X99 motherboard. Even then you need to verify with your motherboard’s manufacturer that this SSD is compatible. We ran into issues with it in our other test system with an ASRock X99 WS-E motherboard and UEFI version P1.4. While it would boot off the NVMe SM951, speeds maxed out at PCIe 2.0 x2 bandwidth when used in a PCIe x4 to M.2 adapter. When in the same adapter in our Z97 test bench, it performed flawlessly.

Also, just because we could, we were able to use it as a secondary drive in an older Supermicro dual 1366 socket motherboard, however, read speeds were much lower at 900MB/s and writes were at 1,200MB/s. In the BIOS the SSD did not show up, thus this confirms that you need a UEFI in order to boot off of it, which leads to our next note on compatibility.

In our Z97 test bench with an ASRock Z97 Extreme6 we normally use Acronis True Image 2014 HD off a bootable USB to clone over the OS of our test bench to the SSD to test boot speed. This task usually goes without a hitch, however, when trying to clone over Acronis did not detect the SM951 NVMe drive, the AHCI variant was detected fine though. So not only can hardware be a compatibility an issue, but software support may be one as well. These experiences exemplify why the AHCI variant is available, compatibility.

Now, moving on to actual testing, we couldn’t clone, but we were able to install of Windows 8.1 in our Z97 system and boot times were very quick. With Ultra Fast Boot enabled in the UEFI and Windows Fast Startup enabled the average boot time recorded was under six seconds from powered off to desktop. It may have been faster, but once the display was on the system was at the desktop each time.  Bear in mind, this was right off a fresh install with no drivers, programs, updates, or data put onto the drive other than just Windows 8.1. So, as long as you have a compatible system, you will have a great experience with this SSD when it comes to booting.

Just as its AHCI bother there is no retail packaging. On the front you have the product sticker and the back is bare. The firmware revision we are testing with today is BXW7000Q. Overall, the thickness is under 4mm and it weighs in under 7g.

We can see that it has just two NAND packages at the 256GB capacity as well as a single DRAM chip and Samsung PCIe controller. We can also see that it has an M key connector, denoting PCIe x4 compatibility.

More specifically it utilizes Samsung’s UBX 3-core controller as well as their own 16nm planar NAND.  Each NAND package is 128GB in capacity for a total raw capacity of 256GB, once formatted the end user has 238GB available to them. It also utilizes a 512MB Samsung LPDDR2 DRAM chip as buffer.

It has been stated by Samsung that they plan to integrate their 3D V-NAND into their NVMe SSDs at a later date, so we may end up seeing a 1TB model with it or another version completely.