Today we are going to be reporting on the Plextor M3P 256GB SATA 3 SSD. Pairing Marvell’s venerable 88SS9174 controller with the latest Toshiba 24nm Toggle Mode NAND, the Pro is not much different from the Plextor M3 SSD that we reviewed a short time ago.

Aside from the new thinner 7mm chassis, the only difference you’ll find between the regular M3 Standard and the M3 Pro is the custom Plextor firmware being employed. That might just be enough to put it over the top.

Plextor’s M3 “Standard” isn’t being replaced by the M3 Pro, but rather, The M3 Pro is being offered as a higher performing option alongside the regular M3. In examining the M3 SSD last month, we found it to be one of the faster drives on the market, eclipsed only by the fastest SandForce-powered offerings.

The M3 Pro doesn’t fix what isn’t broken, and instead takes the same Marvell controller and same fast Toshiba Toggle flash and lays it in a 7mm metal chassis. The cherry on top is the new firmware which promises higher sequential and random numbers than the M3. 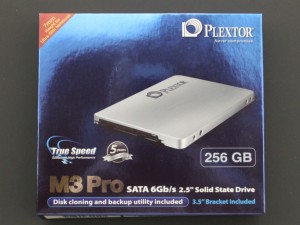 If you could find the M3P on store shelves, it would be hard to miss with it’s high gloss metallic blue box. Inside the box, you’ll find the M3P SSD, a 3.5″ adapter sled, a quick start and warranty leaflet, and a software disk.

Depending on what region of the world you’re buying the M3P in, you could get drive cloning software different from the included NTI Echo. Echo has one helpful feature which allows the user to exclude folders from the source drive when cloning. This is useful if you happen to have 600GB of video on a hard drive that  you don’t want to include when cloning to a smaller SSD. Also included on the disk is additional backup software and a SSD Performance Analyzer.

Cracking the M3 Pro open reveals a familiar sight. Eight Toshiba TH58TEG8D2HBA8C NAND packages are present on the front of the PCB. Each package is composed of 8x32gbit (4GB) dice for a total capacity of 32GB per chip. Also strapped to the front are the two Nanya DDR3 1333MHz modules, each with a capacity of 256MB. The 128GB M3P also possesses two modules, but is only using 256MB. User capacity after formatting is 238GB.

On the back of the PCB, we see the Marvell 88SS9174-BLD2 controller which is also used in the Crucial M4. The old Plextor M2P/Corsair Performance Pro and Intel 510 use the ‘9174-BKK2 variant.

Like many of today’s SSDs, the M3 Pro is using thermal pads to conduct heat away from PCB components and into the chassis.

This is probably not a bad idea, but the residue left behind makes the NAND chips and other surface components look terrible in pictures.