Todays SSD landscape consists of two major players, LSI SandForce and Marvell, both of whom seem to be in a cat fight for top spot with several companies using their controller architecture in their respective SSD products.

Plextor has wisely chosen the server-grade Marvell 88SS9174 Marvell processor for their M3 and our report will give you an in depth view of one of the top SSDs on the market, the Plextor M3 SATA 3 256GB SSD.

In considering both the LSI SandForce and Marvell controller architecture, the LSI has gained a great deal of success with SSD manufacturers because of its easily adopted firmware model that, by many accounts, makes integration much easier for OEMs. Marvell firmware, on the other hand, isn’t nearly as robust as they ship a ‘vanilla’ firmware that has core functionality only which requires more tweaking and adjustment for the manufacturer, and a dedicated firmware team to handle the work.

While this may be a bit of a disadvantage when it comes to ease-of-deployment for manufacturers, it does afford much more control of the performance characteristics of the end product.  Hence, we see a definite advantage of the Marvell controller, especially with manufacturers that have the in-house engineering team to fine tune this product.

The Marvell series of controllers are tried and true, even being utilized extensively in the enterprise SSD realm. This level of reliability and performance provides its customers a very solid and reliable platform to build their firmware on. This is the advantage that Plextor gains with more in-depth tuning for their M3 SSD family.

One of the key differentiators for the Plextor is that it features ‘True Speed’ sustained high performance. This is a very important consideration as all SSDs will degrade in performance over time and Plextor M3 SSDs are geared for high speeds and reliable steady performance over sustained periods.

Armed with an extended 5 year warranty and True Speed technology, the M3 (Sometimes referred to as the M3S, for ‘Standard’) is a SSD that is tuned for long term reliability and speed. The SATA 6Gb/s interface pumps out sustained read/write speeds of 510MB/s and 360MB/s respectively, for the 256GB model. The 512GB model can provide 525MB/s read and 445MB/s write speeds, placing it amongst the very fastest commercially available SSDs on the market. This SSD also has a very nimble 70,000 IOPS read speed, mirrored closely by a 65,000 IOPS write speed with 4k random access. 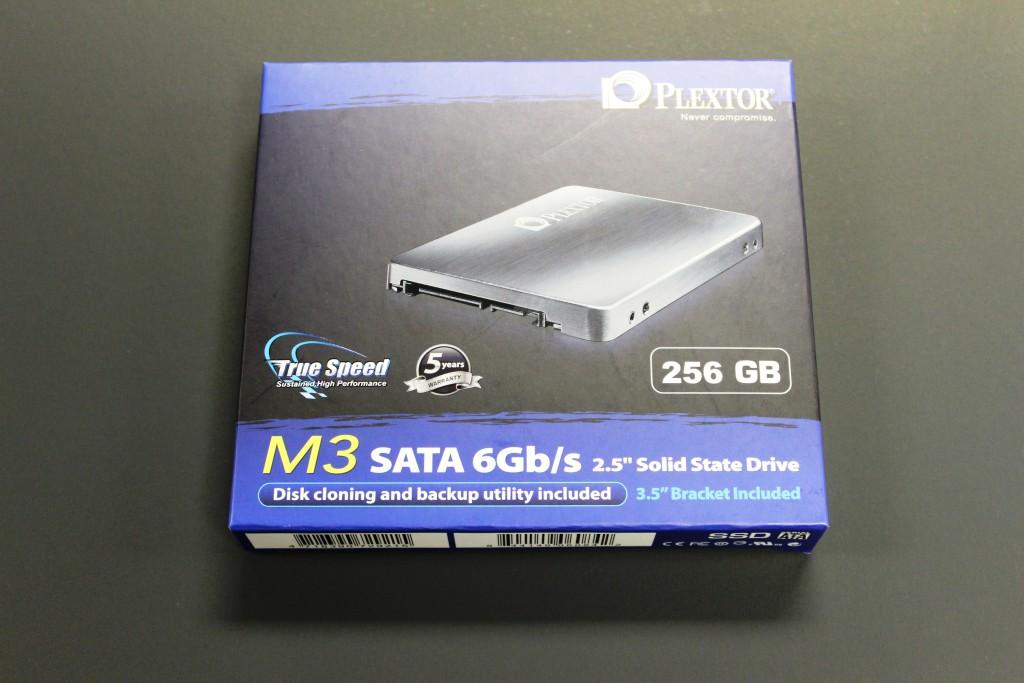 The Plextor M3 exterior case is constructed of an attractive brushed aluminum with the company logo on the front of the SSD.

The top of the printed circuit board (PCB) contains eight pieces of Toshiba 24nm Toggle NAND packages, along with 512MB of DRAM cache memory for increased SSD endurance and performance, and the bottom of the PCB holds the Marvell 88SS9174-BKK2 processor. Each module is 32GB in size for a total capacity of 256GB, however, the total available storage after formatting is slightly less at 238GB.

One thing that was very surprising when we opened the drive was the thick thermal pads used to dissipate heat that we normally see in enterprise SSDs.

This is evident as the thermal paste still remains on the NAND packages and Marvell processor in the above shots.

SSDs produce a very small amount of heat and thermal pads assist in the dissipation of such heat, however, heat can account for an increase in the aging and eventual failure of the drive without this dissipation.

Most consumer SSDs are constructed of metal shells that allow the heat to build up inside. Plextor went the extra mile with thermal pads to transfer the heat to the outside of the case, dissipating the heat easily.