Corsairs newest Performance Pro SATA 3 SSD is on our bench today and get ready for some great benchmarks!  After Crucial’s M4 punch which came as a result of their updated Marvell firmware, it was only a matter of time before another manufacturer came back swinging with the same Marvell controller in tow.

To be quite frank, SSD enthusiasts have made it clear that they want an SSD with superior incompressible data performance results and now they have it. 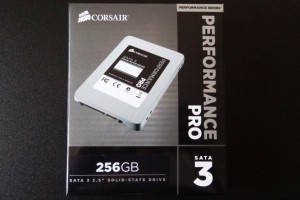 The Performance Pro comes with the standard three year warranty, is fully TRIM capable and has a desktop adapter included with each package.  Very surprising is the fact that we checked e-tailers at the time of this report to find, not only that the drive is available, but also that it is very competitively priced well below MSRP at $219 for the 128GB version and $419 for the 256GB version. This was unexpected.

The Corsair Performance Pro is protected by an exterior aluminum shell which is secured by four screws, two of which are covered with security tape to prevent tampering.  Once opened, we get a great view of eight Toshiba toggle mode 34nm NAND flash memory modules which are 32GB each for a total of 256GB, this being reduced to a final user capacity of 238GB after formatting. Also visible are two 256MB modules of Nanya DDR3-1333 DRAM cache which facilitates garbage collection as well as SSD caching for speed.

On the bottom, we see only the Marvell 88S-9174 6Gbps controller.  This controller is not new to the SSD world as we have seen it in other solid state drives to include those available from Intel, Crucial, Corsair and several other manufacturers but something looked remarkably familiar with this SSD.

The truth is, if you happen to checkout a Plextor PX-M2P 256GB SSD review, these two drives are exact twins when considering the controller, NAND memory and even the cache.  Minor differences will be seen in case color and, of course, branding while we would bet that the firmware between the two equates to a more obvious difference in end user performance.