It is said that 2015 will be the year of the M.2 SSD form factor and, by all indications, this assumption seems to be correct.  This is a very big plus for the SSD industry, as well as a very clear demonstration of the progress we have made in flash technology within the last few years.  For instance, our Patriot M.2 sample that we are reviewing today weighs less than 10 grams, takes up virtually no space in new motherboards, yet has a capacity of 480GB and can transfer data at over 500MB/s with very little heat…and absolutely no noise.  In other words, a storage device smaller than a stick of gum can hold roughly 8500 hours of music, 500 hrs of video, or 155,000 photographs. 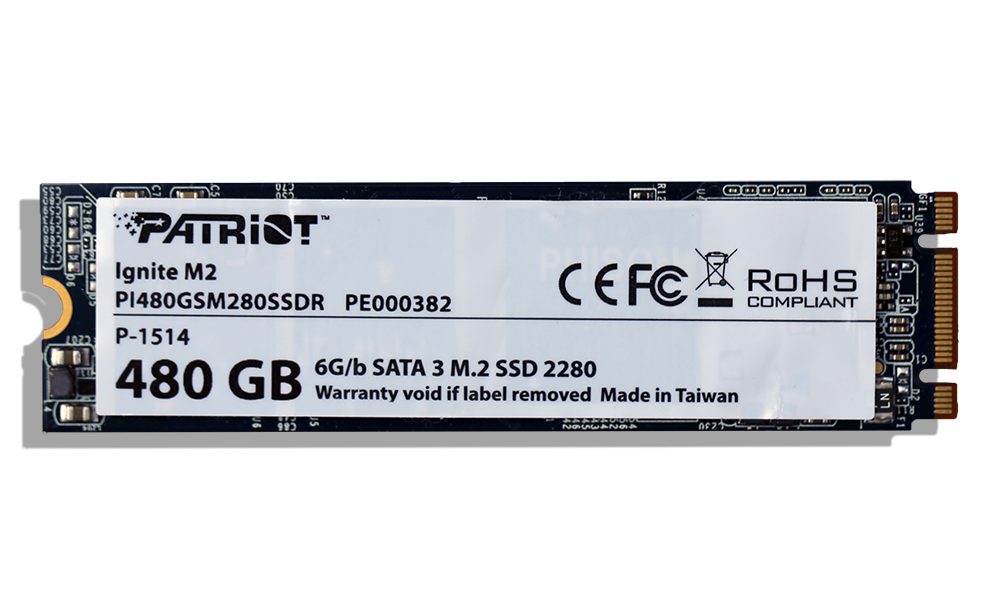 The Patriot Ignite M.2 SSD is a SATA 3 (6GBps) M.2 SSD, available in capacities of 240 and 480GB, has end-to-end data protection, is TRIM compliant and has a three-year warranty.  The Ignite is of a 2280 (80mm) M.2 form factor which means it is 80mm in length; other M.2 form factors including 30, 42, and 110mm.  Performance for the Ignite M.2 SSD is listed as 560MB/s read and 320MB/s write with up to 90K IOPS at low 4k random write disk access. One might notice that the write performance is a bit low, a factor attributed to the memory which just so happens to be asynchronous.

The Patriot Ignite M.2 480GB SSD is situated on a green M.2 PCP with a Phison Quad-core PS3110-S10  SATA3 controller under its branding sticker.  This controller is by no means new in nature and we have seen it in  Kingston Hyperx Savage and Corsair Neutron XT SSDs reviewed here at TSSDR within the last year.

Located on both sides of the SSD are four pieces of branded memory that Patriot identifies as Micron 16nm asycnchronous MLC NAND flash memory, each package being 128GB in RAW capacity.

Last but not least, there is a NANYA 512MB DRAM cache chip on the rear of the PCB, this chip being 240MB in the case of the 240GB SSD.

The capacity of the SSD is listed as 480GB, identifying that 7% overprovisioning has been set in this SSD, reducing it from the original RAW capacity of 512GB.  Once formatted, the available user capacity for storage is 447GB.