Novachips NVS3800 controller (Codename Bugatti 2) is Novachips second generation proprietary design and is based on 28nm low-power technology. It is a quad-combo single chip ARM-based eight channel controller and capable of supporting four different hardware combinations, SATA, PCIe, ONfi or Toggle NAND, or HLNAND. It’s maximum SSD capacity is 32TB and the maximum supporting NAND channel speed is up to 400MB/s (ONfi/Toggle) or up to 800MB/s (HLNAND).

Our SSD Quick Search on the left tab of this page enables a search of similar SSDs with the same components and reviews, along with links to Amazon for a price check. 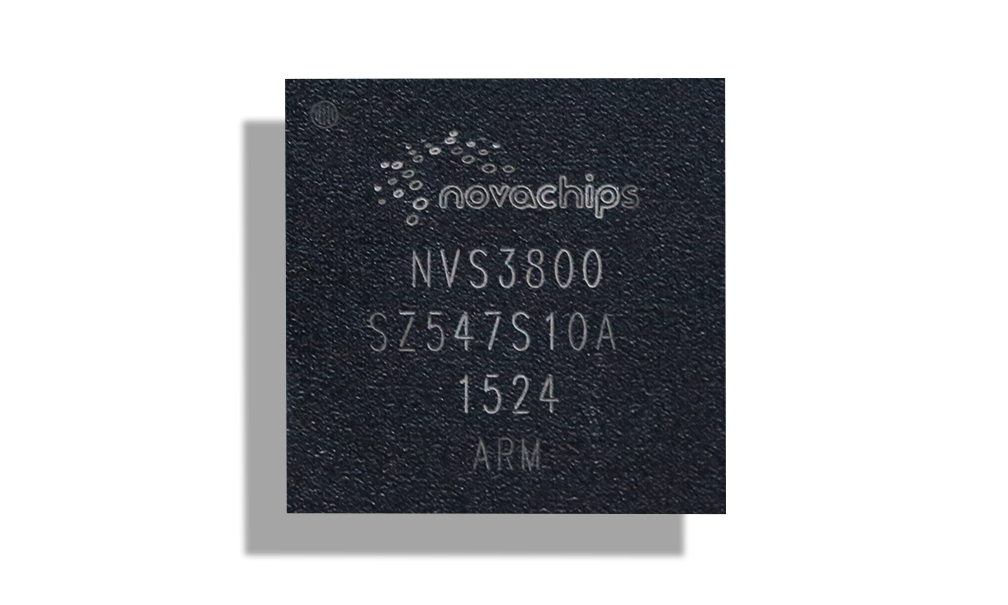 The Novachips NVS3800 supports all modern memory sizes (1y/1x/2x/3xnm) and types (SLC/MLC/TLC/ONFI/TOGGLE) as well as Novachips own HLNAND.  It supports AES 256-Bit encryption, TCG OPAL 2.0 and even DEVSLP in SATA mode.  The only hiccup (and it really isn’t considering their target sales) is that the maximum storage capacity available for all except HLNAND is 1TB, whereas, it is 16TB with HLNAND.

HLNAND is not a new type of memory bore from silicon wafers that are in the control of Novachips, but rather a total package comprised of NAND components and a HL (Hyper-link) bridge.

In the case of both of these SSDs, each NAND module contains 16 NAND dies stacked, each of these being SK Hynix 16nm 128Gbt MLC NAND flash memory.  The total RAW capacity of each memory module is 256GB. To make things a bit simpler, this is an actual photo of the inside of a single module as you see above.  It is a (16+1) die stacked HLNAND memory chip as seen in a top view.

And for the more technically minded, HLNAND adopted Intelligent Packet-based Chip-Select (IPCS) technology over the old-style CE# (Chip-Enable #) based Chip-select, which is selecting NAND dies in ONFi or Toggle system. IPCS technology does not require physical CE# signals which are responsible for much signal-integrity headaches and takes too much PCB area for large capacity SSD design. IPCS technology is, however, based on the existing data packet concept which is sharing 8-bits of DQ signals for Command/Addressing/Data transaction for NAND flash access, by simply adding “Device ID/Bank Address/LUN Address” in front of every Command Packet.

We have both the 4TB and 8TB versions of the NS370 in hand.  Both are 2.5″ notebook SATA 3 SSDs with the 4TB version being 7mm thick while the 8TB version is 15mm thick.  The increased thickness of the 8TB version is due to the dual PCB design.  Both are encased in a two piece aluminum exterior and secured with 4 screws. This is the 4TB PCB and it contains the NVS3800 flash processor, 16 pieces of HLNAND, and two Samsung DRAM cache memory chips:

The 8TB Novachips Scalar NS370 contains a dual PCB combination of which the first PCB contains the NVS3800 flash storage processor, two Micron DRAM cache memory chips, and 16 pieces of HLNAND memory (HL7G2T44BHBB) with each piece containing 256GB of RAW memory, for a total of 4TB.