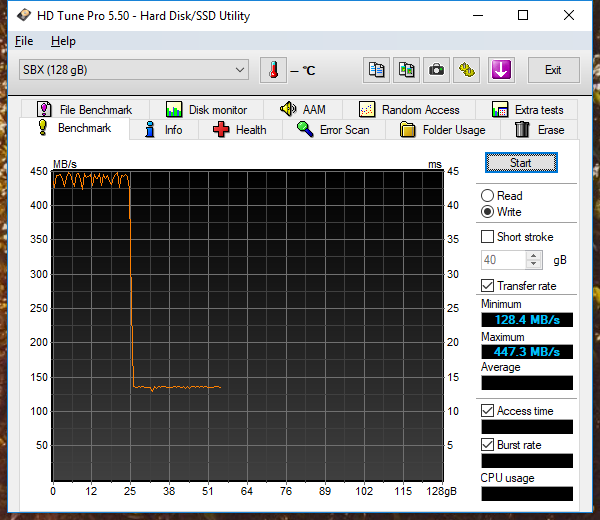 The MyDigitalSSD SBX is a SATA killer. It makes us question the need for SATA anymore. For only a few bucks more than most SATA SSDs, though a lot cheaper than some, *cough, Samsung Pro models, cough,* it delivers speeds that are 3 times faster, if not more than what any SATA SSD is capable of. During our bombardment of testing the SBX series stood its ground. It reached read speeds of over 1.6GB/s and write speeds of just over 1GB/s. While the write speed is rated for up to 1.3GB/s, this rating covers the series as a whole, the 1TB model is the only one that will achieve 1.3GB/s write speeds. The smaller capacities will achieve the write speeds we achieved during testing. Similarly, it is rated for up to 240K/180K IOPS read/write, but during testing our smaller capacities weren’t quite able to achieve this but were close with the 512GB model reaching over 223K/194K IOPS read/write.

Once we moved onto our PCMark 8 Standard testing, we saw that the 256GB and 512GB models performed better than most other TLC based NVMe SSDs, even though they have a PCIe lane allocation deficit (PCIe 3.0 x2 vs x4). Both these models achieved respectable average bandwidth scores of 370MB/s and 404MB/s, respectively. The 128GB model didn’t deliver performance that was as good as its larger brothers, but still, with an average bandwidth of 307MB/s, it still outperformed many larger capacity SATA based SSDs. On the other hand, during our PCMark 8 extended run, we saw that consistency wasn’t the SBX’s strong suit and working it too hard can result in it being unable to recover as quickly as other NVMe SSDs.

Next up, we threw our 30GB folder onto the drives to see if they could keep up with some moderate media transfers. All capacities delivered respectable results with write speeds being near their rated values, although, slightly slower. This was when we first got a hint of the SLC cache being present. Testing later with HDTune revealed that all the models we tested have about a 25GB SLC cache to fill before their base write speeds are revealed. For most daily tasks, this should be more than enough, but for those thinking of getting this SSD for heavy media workloads, be aware of your workflow demands before you consider this drive.

Finally, we took a look at just how efficient the SBX family is. At first, we were wary of the marketing claims stating that it boasts “exceptional workload efficiency,” but after checking the data twice, it turns out its the truth. The 512GB MyDigitalSSD is actually the most efficient NVMe SSD we have tested yet. Even at idle with power savings disabled, the SBX consumes less power than any other PCIe SSD we have tested.

The MyDigitalSSD SBX does not support hardware encryption, does not come with an SSD toolbox or migration software, but as an entry-level SSD it’s hard to hold these things against it. At the end of the day, it is a very competitive product that delivers respectable performance, high endurance, and a 5-year warranty at a friendly price. With 1.6GB/s read on tap, say hello to GB/s indeed. Move over SATA SSDs, Phison’s latest E8 PCIe NVMe controller is here to take your market share with no strings (SATA cables) attached. The MyDigitalSSD SBX series is a welcomed sight and we look forward to seeing how the market will change over the next year as more companies develop similar products. For now, we have no hesitations in recommending the SBX series to our readers. The MyDigitalSSD SBX earns our top value award.

Check Out the MyDigitalSSD SBX at Amazon Now!

MyDigitalSSD has developed a very competitive entry-level NVMe SSD. Thanks to the combination of Phison's latest PCIe 3.0 x2 controller and Toshiba's BiCS 3D TLC, the MyDigitalSBX is one of the most efficient and highest performing TLC based NVMe SSDs we have tested to date. With prices that beat out high-end SATA devices, performance to match, high endurance ratings and a 5-year warranty, we expect the SBX to become one of the go-to SSDs for those looking to break free from the SATA barrier.