The Micron P320h HHHL (Half-Height Half-Length) is a Gen 2.1 PCIe SSD capable of churning out 785K 4K random read IOPS and a little over 200K 4K random write IOPS at steady state. With Microns stash of SLC NAND flash memory, their custom controller, and some great command line and GUI tools, This PCIe SSD is ready to compete. Having had the P320h in our hands for several months now, it’s been a long process getting the P320h to this point, so its a pleasure to finally have the opportunity to see if the wait was worth it. 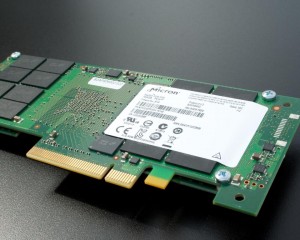 Most SATA SSDs, such as the Crucial M4s and SandForce-based drives for example, adhere to an 8 channel controller design. The more channels there are, the more parallelism that can be exploited, and parallelism is the key to getting the most out of SSD performance.

As it currently stands, sequential read and write bandwidth of your average SSD is already being limited by the 6gbps SATA III interface, especially with read transfer speeds. So what if you want to build something truly, proper fast?

Youd start by ditching the SATA interface, and move to PCIe. A Gen 2.1 PCIe x8 SSD or RAID card can push around 3.2GB/s performance, with Gen 3 adding another 1GB/s or so to that figure.

To get that maximum performance however, you would need a pretty hefty controller as well. The first generation PCIe SSDs were merely a SATA SSDs attached to a PCIe adapter. You still have the SATA speed limit in place, but with a couple drives working together, you can achieve substantial performance. Even Intel used this approach with their 910 Series PCIe SSD, which took an off-the-shelf LSI SAS2008 HBA and mated it with up to four SAS controllers.

In the process, a monster was created; something which was designed to perform best with a staggering 256 commands outstanding and something that, even in its first iteration, can max out 8 Gen 2 PCIe lanes. It needs parallelism, and if you can supply it, well¦ performance is immense. Its like a Formula 1 car; high strung, super-fast, and designed to operate at the limits of engineering technology. Just dont try and get groceries with it, or pick the kids up from school; it just isn’t built for that. But put it in the right environment, and it is capable of some truly remarkable performance.

Microns custom ASIC controller supports 32 channels with 4-way interleaving. That means support for up to 128 NAND dice, which in the case of the 700GB P320h amounts to 1024GB of flash onboard. Each of the 16GB SLC packages is comprised of 25nm ONFi 2.1 flash running at 166MT/s. SLC’s many benefits over MLC include lower read and write latency, incredible endurance, and better performance, but at much greater per-GB cost.

Microns RAIN technology, their take on NAND level redundancy through parity, consumes a a small amount of that t 1024GB. 1/8th or 12.5% is used for parity, leaving 896GB to work with. It might sound like a steep sacrifice, but the ability to recover from die failures on the fly is an important one. Without it, only one of those 128 NAND failing means the whole drive is rendered inoperable.

Take off another 22% for over-provisioning, 7% more for spare area, and were left with about 650GB of usable capacity. That over-provisioning helps keep write amplification low, performance high, and extends the 700GB P320hs endurance to an absolutely absurd 50 petabytes; an astronomical number to be sure.

That endurance and performance comes at a price, but Micron didn’t disclose what it was before publication. With ownership and production of all the components involved, Micron should have a significant ability to price the P320h in a competitive way, but it’s still not going to be considered cheap by anyone.