In July of last year, Samsung announced their manufacturing of the XS1715, worlds first NVMe SSD capable of performance of 3GB/s throughput and up to 750,000 IOPS.  Unfortunately, the closest anyone has come to that SSD, at least from the review perspective, is through public displays of its progress at both Samsung SSD Summits last fall, and this summer.  Having said that, the XS1715 is available through the Dell PowerEdge Express sales channel. 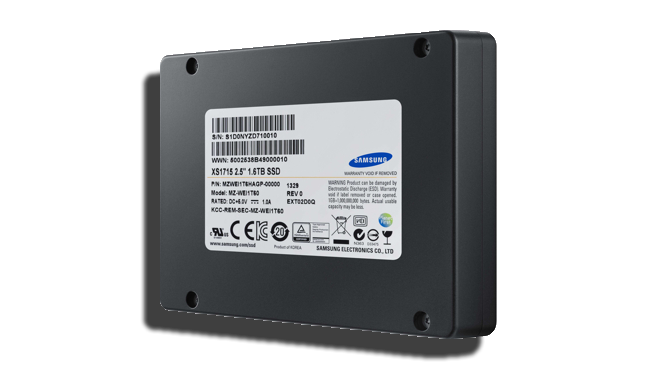 In the enterprise space, this is typical of Samsung where one might never see a product unless a need for tens of thousands becomes prevalent and other SSDs have had very similar fates. Our experience with this comes from a lesser known part of what we do where we assist companies in determining their flash needs, make an introduction to what we believe is the right SSD manufacturer, and help them along with a purchase.  In short, our mark is on a rather healthy number of SSD sales to date, yet not one is the Samsung XS1715 NVMe SSD.

In all fairness, our recent review of the Intel P3700 800GB NVMe SSD, both from an enterprise and enthusiast perspective, is the first look the storage world has really had at NVMe, and definitely the first taste of how it may appear for business use, enthusiast and even the consumer.  In short, it is a powerhouse that revolutionizes the storage industry and will affect all segments within the next year.  And then came the e-mail, PM’s and comments once again… Will it boot?  Is it hot?  What about start times?  Can we migrate the system as a backup to a SATA 3 SSD?  Is it difficult to install?  Questions like this played right into our hands as we fully intended on creating just that enthusiast build this weekend.

The Intel P3700 NVMe SSD is capable of booting from and running on PC systems of at least the Windows 8.1 level and above.  It will work in a Windows 7 system, but it won’t boot.  For it to boot, one needs Windows 8.1 (as the NVMe driver is native to this OS) and a motherboard that supports boot through UEFI, not an ‘either/or’ selection where all SATA and NVME might hope to be recognized.  In our experience, the Intel P3700 SSD will not be recognized unless the motherboard is told to seek out NVMe devices first.  For our purposes, we are using the ASRock Z97 Extreme 6 motherboard which has a Compatibility Support Mode (CSM) that can be found in its boot menu.

When installing Windows 8.1, you will be given the option to install via UEFI or normal, select UEFI as it is the only way the NVMe will be recognized.  In our experience, we always delete any existing partitions and then create new ones where we found something a bit interesting.

Initially, the system identified the need for two partitions (boot/Master) as we see in any typical Windows 7 installation.  In deleting these and letting the system create its own new partitions, however, we were provided with the above. Installation of Windows 8.1 took a mind boggling 3 minutes, two reboots and we were up and running!