A few days ago, we released our review of the Intel SSD DC P3700 NVMe SSD.  This new entry to the enterprise market brought in just under 500K IOPS in a single PCB and single controller design package, a design not needing the traditional RAID solution to achieve performance above 2.5GB/s.  As much attention as it gained from the enterprise community, we were literally swamped with e-mails requesting common enthusiast benchmarks, along with the question of the day, “Will it boot?” As much as the DC P3700 is built as an enterprise storage solution, interest definitely carries much further as we anticipate release of the entire P3000 NVMe SSD family in the near future. 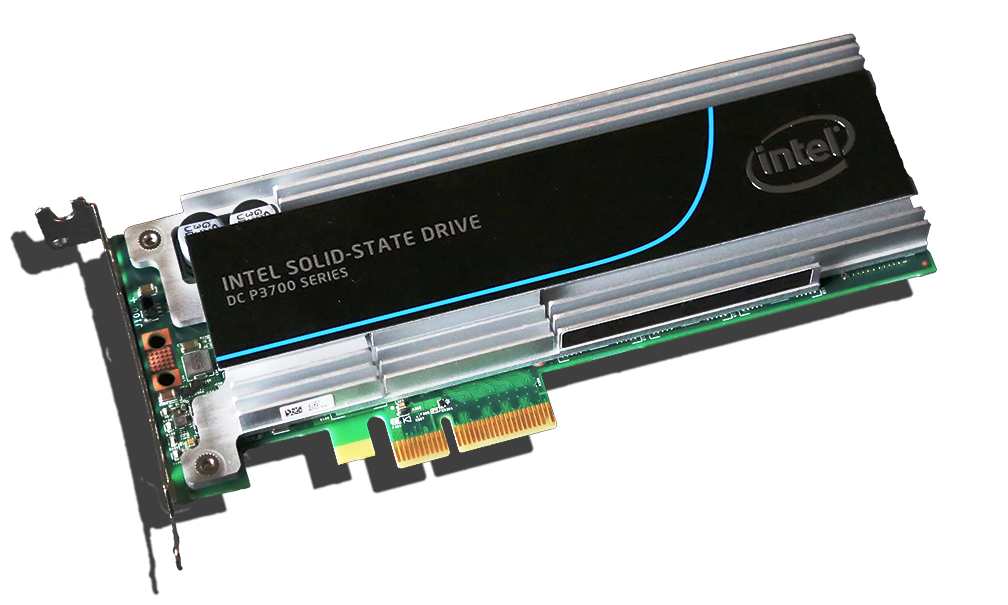 Let’s start with a brief understanding of  NVMe (Non-Volatile Memory Express) that enables us to understand why this protocol is much faster with a much lower latency than SATA or SAS. First, NVMe has a minimal command set in comparison and consists of only 10 administrative and 3 I/O commands.  Avoiding a very confusing explanation, consider it this way.  We have two ladders that are the same distance to the top, except the ladder on the right has twice as many rungs.  Each person is required to come in contact with each rung on their way to the top.  Who do we think would get their first?  Of course, the person scaling the ladder with fewer rungs would arrive first, but another inevitable result that we might not consider, is the increased probability for error from the person on the right.  The other given of NVMe is that, by connecting directly to the PCIe lanes, it is closer to the CPU and results in a much lower latency. SATA was built for mechanical hard drives; NVMe is built for flash.

BUT WILL IT BOOT?

The P3000 NVMe family will boot, but only with Windows 8.1, or enterprise versions of Windows and Linux.  This is not good news for those of us who swore that Win8 would never be seen in our systems. The NVMe driver is native to Windows 8.1 which is key to its installation. Installation can be accomplished with Windows 7 and use of the included NVMe driver, but there is no possibility of using it as a boot drive. Even in Windows 8.1, there is a trick to the installation and the key term to remember is ‘UEFI‘. In our trial and error learning of the ONLY way to install the P3700 on a typical board, we discovered that one first had to install Windows 8.1 onto the P3700 within the optional Windows UEFI shell.

This is the only way the P3700 will be recognized as a bootable device. After Windows 8.1 is installed onto the P3700 and the system reboots, it is necessary to go into the BIOS immediately and enable the ‘Boot From UEFI Only’ option, save and reboot into the BIOS once again.  From there, the drive was selected as a boot device known as ‘Boot Manager’ and all went smoothly. As a final step, install the latest Intel NVMe driver as it is much higher performing than that native in Windows 8.1.

This Intel chart describes the complete specifications for all three P3000 drives very well, and the key takeaways are performance, endurance and warranty.  Pricing is also unexpected as we believe that many would have, and may still, grab the P3700 AT $1200, but the P3500 is destined to be in great demand on release.

Not mentioned in the chart but worth noting is the fact that the Intel P3000 family is fully TRIM compliant and capable of garbage collection.

The Intel P3700 consists of a single PCB design that is covered by a very cleverly shaped aluminum heat sink, held in place by five screws, two of which also secure the end bracket.  The NVMe controller has a thermal paste that seats it to the heat sink, while 22 chips contain thermal pads to further dissipate heat.

Perhaps one of the most valuable contributions to this SSD comes from the PCIe Gen 3 X4 interface at the base of the PCB.  Prior, we had seen PCIe SSDs using the Gen 2 interface, which meant that they were capable of a theoretical maximum of 500MB/s (5GT/s) per lane, or 2GB/s for a x4 device.  Gen 3 is capable of 985MB/s (8GT/s) per lane, for a total of just under 4GB/s.  Considering that specs list a high throughput of 2.8GB/s, this could not have been achieved without PCIe Gen 3, at least in a 4 lane design.

On the PCB, we have 36 modules of Intel’s 20nm HET (high endurance)MLC NAND flash memory, five chips of Micron DDR3-1600 DRAM cache memory for a total of 1.25GB, Intel’s 18 channel NVMe controller, numbered CH29AE41AB0, along with two power capacitors that prevent data loss should there be a power failure.  Much credit to Intel for this memory that allows the P3700 a maximum of ten drive writes per day and a massive 36.5 PBW (petabytes written) life span.