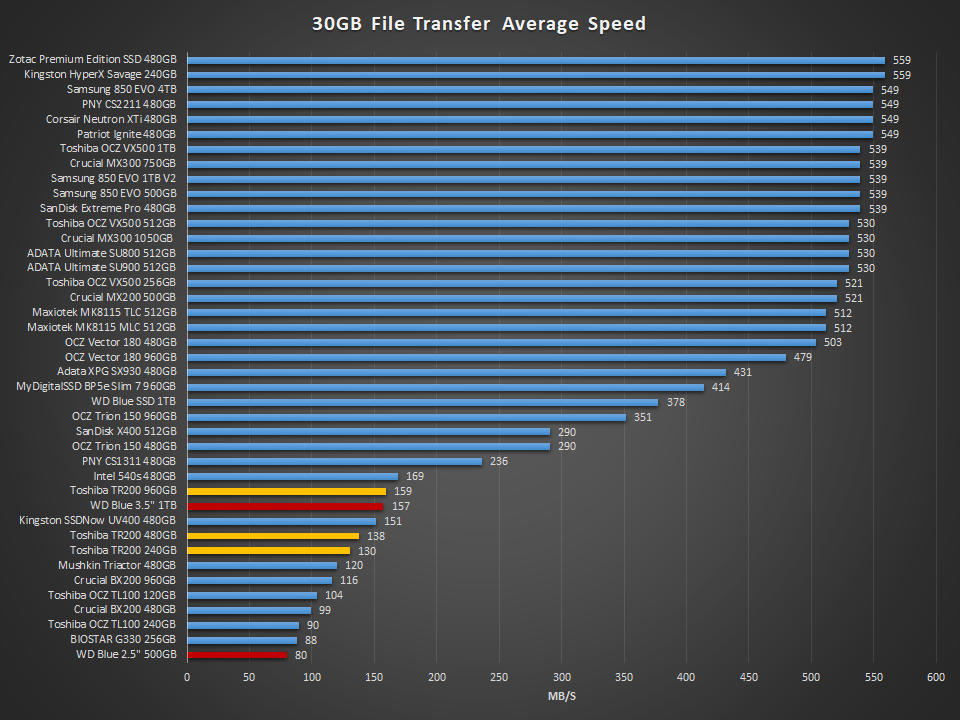 Transferring 30GB of data to the TR200 showed us its weakness, writing a large amount of data at one time. Looking at the performance, we can see that the 960GB came out on top. It averaged 159MB/s while the 480GB model averaged 138MB/s and the 240GB model came in last at 130MB/s.

It seems that just as we had seen in our OCZ TL100 review last year, the controller/firmware recognized a pattern with this test and fed it false results. The average speeds of 400-500MB/s here do not reflect the TR200’s true write speed. As we just saw in our real-world file transfer above, averages ranged from 130-160MB/s.

The Toshiba TR200 delivered performance that was in line with its specifications. 550MB/s read and 525MB/s write speeds were delivered without an issue, 4K IOPS were a little low for some capacities, but then again, those numbers never truly relate to consumer workloads. PCMark 8 the TR200 struggled a bit, but performance results were similar to the TR150 enough for it not to be much of an issue. During PCMark 8, however, we did see that performance was more inconsistent than we would hope for, but because this is an entry-level HDD upgrade product, it is hard to shame it for that. PCMark 8’s extended test is typically far outside of what most would ever put their storage media through. PCMark 8’s results carry more weight in judging this type of product.

The TR200 does have some downsides besides its PCMark 8 extended results. Even though NAND endurance is better with the latest 3D stuff, the TBW ratings are similar to the “old” TL100 and TR150 products. And again, although the NAND is supposed to be improved from previous versions, we are seeing that the previous TR150 outperforms the TR200 in writes even though it is utilizing planar TLC NAND. What really seems to be the killer here, however, is the DRAMless controller. This was also apparent in their TL100 line, and while it may improve power efficiency, the use of this DRAMless controller just doesn’t offer the strong, lasting write performance enthusiasts want. But just how important is this aspect of performance when choosing an SSD for the average consumer? We know avid storage enthusiasts will be fast to reply that it means the world to them and they won’t settle for anything less than double the performance of a hard drive in this metric, but does slow write performance after the SLC cache is full really mean an SSD is no good? We don’t believe so. Take note of the following example.

Just using the 480GB model as a temporary directory we wrote, read and modified a few “small” 20kb to 20MB files as well as a few “large” 500MB to 2.5GB files on it here and there over the course of a few hours working. This type of use we would categorize as above average office use or just a normal work session for us. While doing so, we have yet to see any indication of the TR200 being slow. On the contrary, it was more than fast for our workload. Write speeds were on par with the specs. Everything was snappy and nearly instant as it should be. The Toshiba TR200 simply performed just like any other SSD should.

We’d wager to say that 90% of computer users out there have similar, or even lighter workloads that they are dealing with. If you are just using office productivity software or browsing the web, for the most part, an entry-level SSD such as the TR200 will be more than enough. You already know its weakness, but you should also know its strengths. Blazing fast access times, superior small file read and write performance, as well as faster sequential burst performance. And that’s not even mentioning some of the other benefits of SSDs such as higher reliability and being lighter in weight! There is a lot more to real-world performance than just seeing that A SSD product scored higher than B SSD product in a benchmark and that sometimes you have to step back and look at the whole picture. Almost any SSD destroys a hard drive in day to day use.

The Toshiba TR200 will enable you to open programs nearly instantly, load your operating system 2-4 times faster than an HDD, and your overall computing experience will be improved with the transition to an SSD. The difference from one SSD to another, even from a SATA SSD to a PCIe NVMe SSD, is minuscule compared to the difference in performance you will see transitioning to an SSD from an HDD. This is obvious when looking at our PCMark 8 results. It is a no-brainer, flash is a must for OS use. We have been spoiled by SSDs for years now, but for those who have not yet indulged in the forbidden fruit, we couldn’t feel more sorrow for you. With so many options out there, it’s crazy to think there are still those of you who don’t have one!

Based upon the results of today’s review and looking to the competition, we must say that it is going to be hard recommending the TR200 at MSRP, but luckily with the holiday season about to be upon us, we should see some decent sales happening and much more competitive street pricing. So, if you find Toshiba TR200 for a good deal, it just could be the perfect upgrade for those of you who still have an archaic HDD.

The Toshiba TR200 is not the fastest SSD out, not by a long shot, but that doesn't necessarily equate to it being slow. Compared to an HDD the TR200 will run circles around its tracks (pun intended). With capacities from 240GB to nearly 1TB, the latest BiCS 3D FLASH TLC, and competitive day one MSRPs, the TR200 just might be the SSD to buy once the holiday season hits and sales start to happen, especially for those of you who have yet to taste the sweet performance of flash media.