SSDs are state of the art memory components. Over the recent years we have seen the market grow and diversify. With the explosion of TLC SSDs in the marketplace these days it is a race to the bottom more than ever. Companies are trying to find ways to reach those penny hoarders by developing cheaper and cheaper SSD models to replace archaic HDDs. Toshiba/OCZ’s latest offering is such a product. The OCZ TL100 represents their attempt to win the race to the bottom and is for those who don’t need that much capacity and are looking to upgrade their laptops and desktops to flash storage. By utilizing Toshiba’s 15nm NAND and a TC58 DRAM-less controller, the TL100 has some of the basic ingredients for a low cost SSD. No DRAM typically means a few dollars saved on manufacturing costs per drive and could result in better power consumption performance. Although, with that said, there is a trade off in performance, which we will be analyzing more closely in today’s review. Once our testing is all said and done we should have a good understanding of just how good, or bad, of an option the TL100 is. So, read on to find out! 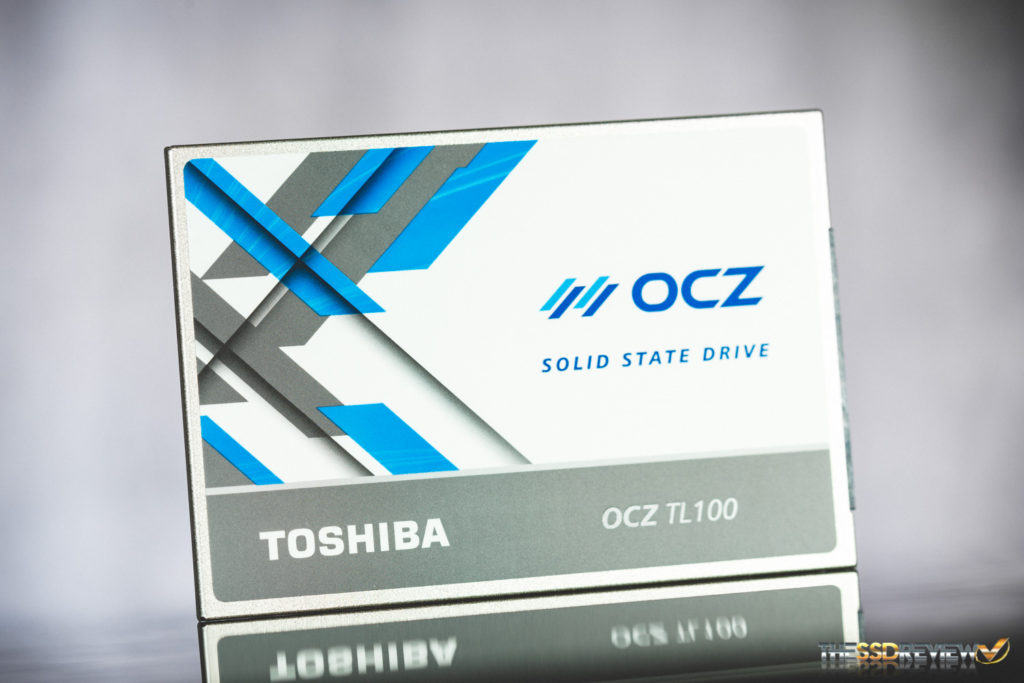 The OCZ TL100 is a SATA 6Gb/s SSD that comes in a 2.5″ 7mm form factor. It is available in capacities of just 120GB ($50) and 240GB ($70). It is rated for up to 550MB/s read and 530MB/s write, however, that write figure is for when data is written to the SLC like cache buffer it features. Outside of this small cache (spoiler) the write speed can drastically reduce down to below 100MB/s. In terms of IOPS it is rated for 85K/80K read and write, which blows the doors of any HDD in the market. Endurance figures are on the low side, up to 30TB for the 120GB and 60TB for the 240GB model, or 27GB/day and 54GB/s respectively. Looking at the power characteristics, we can see that the active power consumption is pretty low, at about 1.6W typical, however, the idle consumption is about 4-8x higher than other SSDs at 440mW. We will test against these numbers and see how this SSD compares to the others we have put through the ringer before.

In terms of features, there really isn’t much to say besides the already stated SLC write cache buffer it has built in. The typical features of SMART, TRIM, and idle garbage collection support are there and it has DevSleep support, rated at 10mW. It features a 3-year advanced warranty from OCZ as well, which makes RMA a breeze if something is to go wrong with your drive down the road. Finally, you can utilize their SSD Utility and command line online update tools to monitor your drive, update the firmware, and much more.

One thing to note, however, is that OCZ states that:

So, at this time, it doesn’t fully support secure erase, but will in the future via another tool.

The packaging for the Toshiba OCZ TL100 is stylish and is of a grey, white, and blue color scheme. The capacity and model name is on the front as well as a picture of the actual drive. On the backside, we see that the form factor and interface is listed as well as the fact that it utilizes Toshiba TLC NAND. Furthermore, other features such as TRIM support and the 3-year warranty are listed. An additionally, there is a disclaimer stating that write speed may vary depending on the host device, read and write conditions and file size. So, we expect to see some variability in today’s results for testing based off that and the fact it utilizes TLC NAND.

The TL100 is made of metal and is very light weight. On the top side is an appealing graphical sticker with the Toshiba and OCZ branding on it along with the SSD name. On the back side is the product information such as the serial number, part number, sku, capacity, firmware, certifications, and more.

Once disassembled we are able to see that the blue PCB is quite small, only about 1/2 the size of the shell surrounding it. There are 4 NAND packages and a single DRAM-less controller for us to look at. Also, there is a thermal pad to help dissipate heat off the controller and into the shell.

The controller has the part number TC58NC1010. Though it is close to the TR150’s TC58NC1000 controller, it is not the same as it supports DRAM-less operation. The NAND utilized in this device is 15nm Toshiba TLC. Each package is 32GiB/64GiB in capacity for the 120/240GB models. Once formatted in Windows the 120GB model has 111GB of usable space and the 240GB model has 223GB.