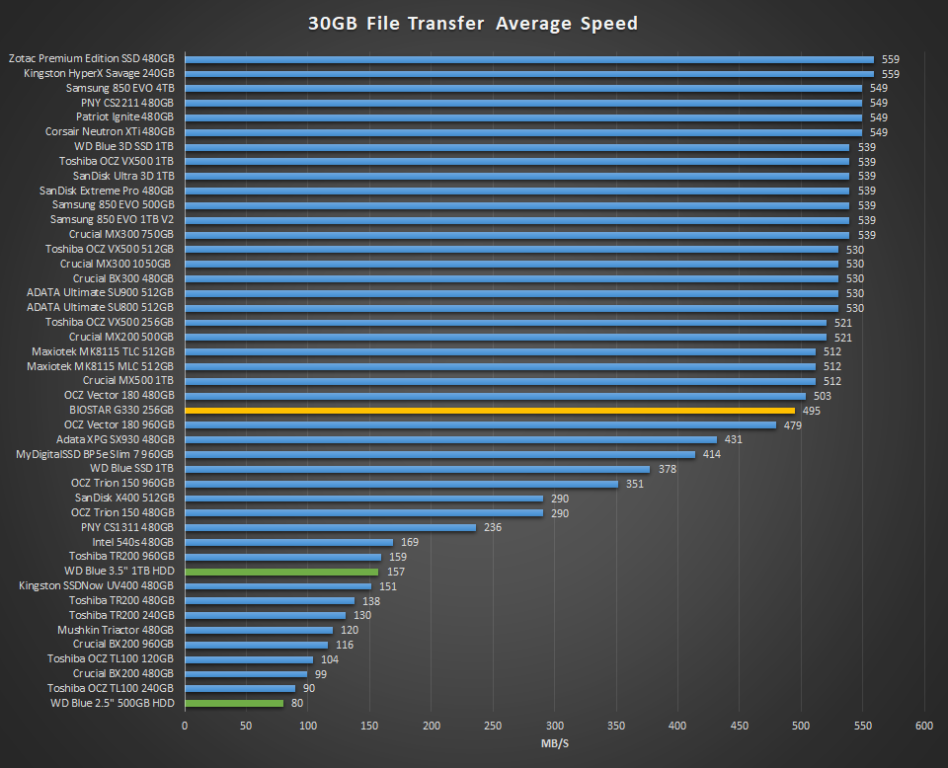 With an average transfer speed of 495MB/s, we can see that the BIOSTAR G330 trails behind all, except for a 2.5″ WD Blue HDD. 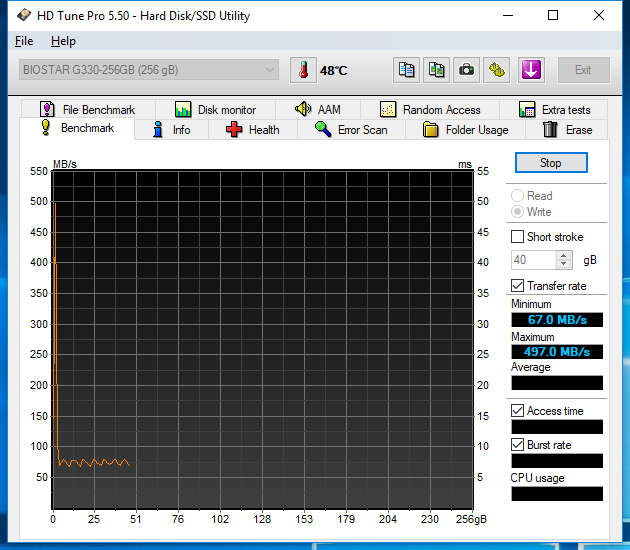 During this test we can see that the BIOSTAR G330 can drop down to an average speed of about 70MB’s after the SLC cache is full.

Testing and taking our first look at BIOSTAR’s G330 was an interesting journey. Things started off well with our synthetic tests. In ATTO, AS SSD, CDM and Anvil, it got some great scores. Speeds were on par with the rated specs of 565MB/s read and 515MB/s write. PCMark 8’s normal routine even gave it a great score of 278MB/s. Next, we threw our real-world file transfer at it. The result was very good at 495MB/s ranking it just under the majority of the top performing SSDs. Things were looking great at this point. Not only was it reaching the performance numbers it was supposed to, it was doing very well during PCMark 8’s trace based testing. However, our next set of tests pushed the BIOSTAR G330 hard, maybe too hard. But, this is how we weed out the weak. 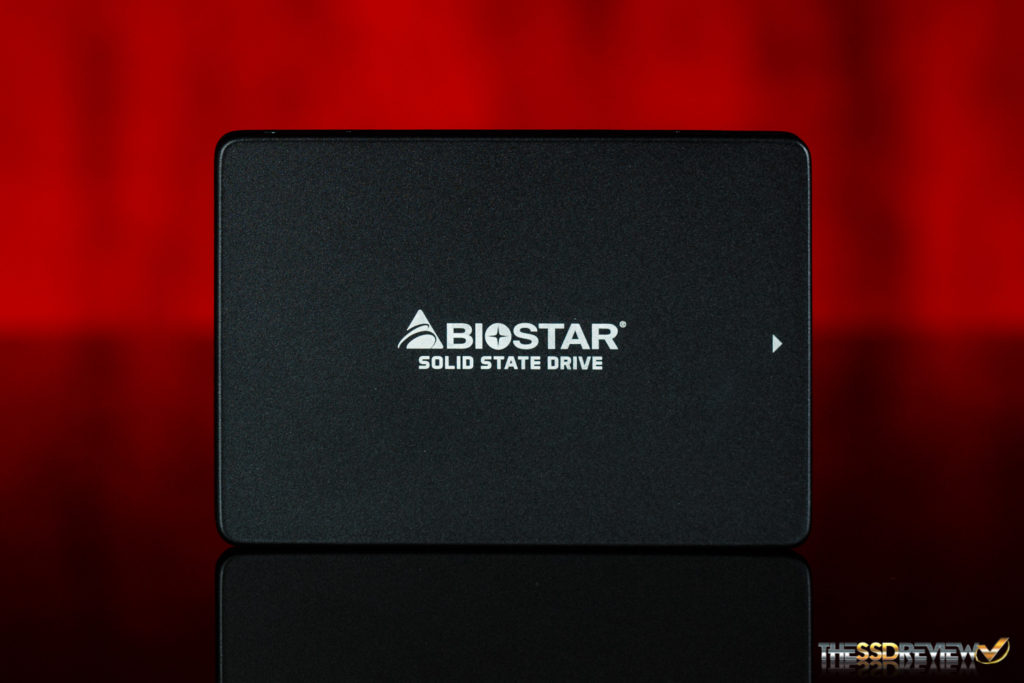 During after PCMark 8’s normal run, we put the hammer down and put it through its paces during the extended consistency test. During PCMark 8’s consistency test the G330 just completely fell on its face. It trailed behind the pack during the heavy workload portion of the test and never recovered to perform well in the recovery phase. It averaged around 70MB/s when most other SSDs averaged 175MB/s-225MB/s. Finally, we utilized HDTune to see its base write performance, which as expected, was very low at around 70-75MB/s.

Contrary to what the marketing seems to have stated, this BIOSTAR G330 SSD is not quite the premium SSD it is stated to be. It is not “Ultra-fast,” if it was, then it wouldn’t have fallen on its face during PCMark 8’s extended testing and lay down a measly 70MB/s write speed once the SLC cache is full. The cache flushes/resets too slowly after heavy workloads as well. It needs to be consistently fast during write transfers over time, just as well as it is during read transfers in order to be “Ultra-fast.” This also proves that it does not “offer 2 times faster data transfer rate than that of traditional SSD,” in contrast to their website’s claims, at least all the time. I remember back when I had a 128GB Plextor M5 Pro and it was able to sustain over 400MB/s writes till full, nearly 5-years ago… In spite of this, however, the G330 is still much better than an HDD and a fairly good performer for those who don’t have professional media workloads.

The BIOSTAR G330 could be a decent OS drive or game drive, price permitting. Again, it did perform very well during PCMark 8’s normal run and the SLC cache fills after 60-70GB written when in a clean state. For most people, a drive that performs well there should deliver perfectly acceptable performance that is similar to any other SSD. OS tasks aren’t that storage intensive once it is on flash, the same goes for gaming. Most hard drives will read at up to 200MB/s, but random and small file transfers slow HDDs down to a crawl. Luckily for an SSD such as this, although sequential write performance can at times be a weakness, 90% of the time, it really doesn’t matter. What really matters is its small file transfer performance and fast sequential read performance. OS files and programs, game textures, and levels will all load faster and their appearance will be more fluid compared to hard drives. So, we will go ahead and say this is a fine choice for gaming. Most of the time we’re limited more by internet speed rather than HDD speed when it comes to downloading our massive game libraries nowadays anyways.

BIOSTAR's latest update to the G300 line, their G330, features Micron's latest 3D TLC and an SMI 2258 controller. While it was able to keep up in our easy tests and PCMark8's normal storage test, it couldn't handle much more. During PCMark 8 extended it fell on its face and during our 30GB transfer it lagged severely. With a lower price point, this SSD could be appealing for those looking to simply speed up a system for their friend or family member. Otherwise, there's not much else to say.